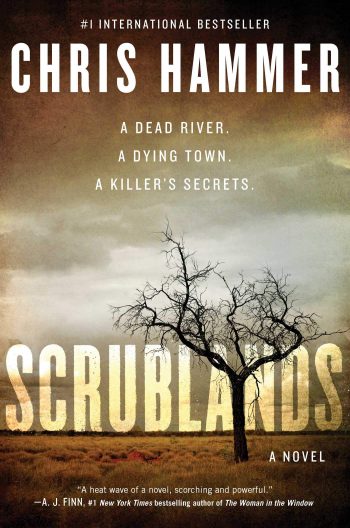 In the vein of The Dry and Before the Fall, a town’s dark secrets come to light in the aftermath of a young priest’s unthinkable last act in this arresting and searing debut thriller.

You’re going to want to put journalist Chris Hammer’s debut thriller (he’s also the author of Rivers, a nonfiction work about the rivers of the Murray-Darling Basin) on your must-buy list after reading this one. I say that right out of the gate because this (at times literal) scorcher of a novel knocked my socks off. It already had an advantage with me: its setting. I’m fascinated with Australia, and this immediately recalled another of my favorites, Jane Harper’s fantastic The Last Man. Hammer sets his tale in the dying Riversend, a small-town beset by hardship and surrounded by the unforgiving Scrublands, which provide sustenance (and off-the-books moneymaking opportunities) for only the hardiest of souls.

Journalist Martin Scarsden is in Riversend to profile the drought ridden town a year after a beloved priest, Byron Swift, opened fire outside his church, killing five people. He was shot dead by a local cop soon after.

Martin tries lifting his sunglasses, but the light is dazzling, too bright, and he lowers them again. He reaches back into the car and cuts the engine. There is nothing to hear; the heat has sucked the life from the world: no cicadas, no cockatoos, not even crows, just the bridge creaking and complaining as it expands and contracts in thrall to the sun. There is no wind. The day is so very hot, it tugs at him, seeking his moisture; he can feel the heat rising through the thin leather souls of his city shoes.

He finds an oasis in all that heat, a bookstore actually called the Oasis. Its cooler inside, and meeting the proprietor, Mandalay “Mandy” Blonde, is a revelation for Martin. Mandy is ethereally beautiful and vibrant, and Martin can’t imagine someone like this living in such a desiccated town. He soon finds out that the bookstore is all she has left of her deceased mother, Katherine, and it’s not a bad place to raise her infant son, Liam. She also offers her opinion for Martin’s story. Mandy is adamant that the rumors about the killer priest being a pedophile are not true.

“Martin, I’m telling you, he looked into my soul. I glimpsed his. He was a good man. He knew I was in pain and helped me.”

“But how can you reconcile that with what he did? He committed mass murder.”

“I know. I know. I can’t reconcile it. I know he did it; I don’t deny it. And it’s been messing me up ever since. The one truly decent human being I ever met besides my mother turns out to be this horror show. But here’s the thing: I can believe he shot those people. I know he did it. It even rings true, feels right in some perverse way, even if I don’t know why he did it. But I can’t believe he abused children. As a kid I got bullied and bashed, as a teenager I got slandered and groped, and as an adult I’ve been ostracized and criticized and marginalized. I’ve had plenty of abusive boyfriends—almost the only kind of boyfriends I ever did have; narcissistic arseholes capable only of thinking of themselves. Liam’s father is one of them. I know that mentality; he was the opposite. He cared.”

The motive of the shootings has never come out, but one thing is for sure–Mandy isn’t the only one that comes to the defense of Byron Swift. A local shop owner and even the constable that shot him, Robbie Haus-Jones, insist that he was a good man and that they have no idea what precipitated the massacre. It’s a conundrum for Martin, but he’s determined to get a good story. After all, he’s fresh off of a horrible experience while reporting in Gaza, and he’s keen to prove to his editor that he’s still got his mojo.

Carve out some time for this stellar debut, because you won’t want to put it down.

Poor Martin. Riversend is about to put him to the test, physically and mentally. The reason behind the shootings is certainly compelling, but the heart of this story is how horrific crime can inexorably change the people close to it, and in this case, an entire town. Hammer is a master of atmosphere, and there are a few scenes that will have you breathless, such as when Martin is conscripted into helping fight a raging fire out in the Scrublands. If you like eccentric characters, this is the book for you–from an erudite bum that holds court in an abandoned hotel to an affable elderly Scrubland resident who prefers to beat the heat by hanging out (literally) in his birthday suit, with nary a hint of embarrassment when guests come calling.

When the revelations (and there are quite a few) start, they cascade like a long line of dominos, catching just about every major player in their wake. In lesser hands, a story this chock full might have been less successful, but not to worry, Hammer is an author very much in command of his craft. Hammer’s journalism background brings welcome authenticity to the narrative, and if you’re fascinated with the life and work of these intrepid people, like I am, you’ll get even more out of an already fantastic story. While there is plenty of darkness in Riversend, there are also plenty of people that are determined to live their lives as best as they can while finding happiness where they can, but Martin’s investigation, and discoverie,s touches a lot of lives, and they’ll never quite be the same in the aftermath. Hammer expertly explores man’s capacity for evil as well as our capacity for love and forgiveness, all wrapped into a crackling thriller.

Scrublands is a bit of a slow burn at first, but it doesn’t take long to get rolling, and once it does, watch out. There’s something for just about everyone. Carve out some time for this stellar debut, because you won’t want to put it down.