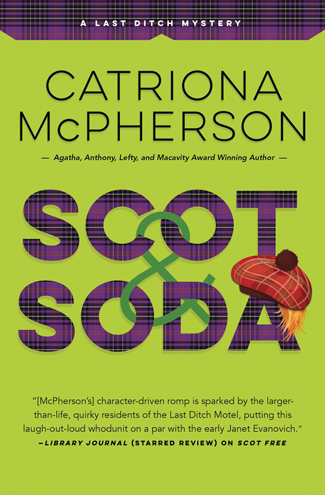 Scot & Soda by Catriona McPherson is the second book in the Last Ditch Mystery series featuring Lexy Campbell, where the Scottish-born California transplant sails into trouble when her houseboat party ends on a deadly note.

I started reading the Dandy Gilver cozies by McPherson years ago. Dandy is a bored, upper-class housewife in 1920s Scotland who finds she has a knack for investigating crime. The plots are beautifully woven and the characters well drawn. So when I found that Catriona McPherson had written some standalones, I thought I would give one a try.

I must say, these books really do stand alone. As She Left It had me wondering: if I was ever in Opal’s circumstances, would I have the curiosity and stamina to look into long-ago mysteries? Then, along came The Day She Died, a tightly woven mystery with thriller overtones. So when the Last Ditch mysteries came along, I hopped right in to see what else Catriona had up her sleeve.

Scot & Soda opens on Halloween. Lexi Campbell is hosting a costume party on her houseboat moored in the water behind the Last Ditch Motel, home of her quirky assortment of friends. One might wonder how Lexy—a first-class clinical psychologist from Scotland working as a generic therapist in California—wound up among this crowd. I’ll let her tell you:

Me? What was I doing at the Last Ditch? Funny story. I emigrated from Scotland to marry my sweetheart. Or so it said in the trailer. Only, he turned out to be heartless and sour. Then I inherited a houseboat from a client, you know the way you do, and since the Last Ditch is named after the slough that runs along behind it and there’s nowhere else in this dusty pancake of a town with enough water to float even a candle on … here I am.

The Halloween costume Lexy is wearing for the party does make it difficult for her to carry out some of her hosting chores. And since the houseboat refrigerator is of limited capacity, well, Lexy found an easy solution for providing the cold beer that she knew her friends would expect. She bought a couple of cooler boxes, filled them with beer, and dangled them off the side of the boat, deep in the slough to keep the bottles chilling.

The only problem was the ax sticking out of Lexy’s chest (perhaps not the best costume idea for a person in the role of hostess) that prevented her from grappling the rope to bring the beer topside again. So, two of her guests gallantly agreed to take on the task.

He went silent. And he stopped pulling. I leaned over to see what the problem was, buckling my axe and dislodging it from my chest wound. Under the water, floating just deep enough to be semi-visible in the murky water was … not a box of beer bottles. Not a box of anything. It wasn’t square. It wasn’t squat. It was long and rounded and waving at one end. Literally, it was waving at one end, because it was a human arm, with a human hand wafting back and forward in the water, its chunky ring glinting.

Scot & Soda is a contemporary cozy with everything I have come to expect from Catriona McPherson—warm and wonderful friendships, a difficult relationship between the protagonist and local law enforcement, a plot with layers and layers of mystery, and most importantly, a protagonist that I could definitely hang out with on a Saturday night. And a word of advice: when you read Scot & Soda, keep an eye on the dead guy’s ring.