Book Review: Save Me From Dangerous Men by S.A. Lelchuk 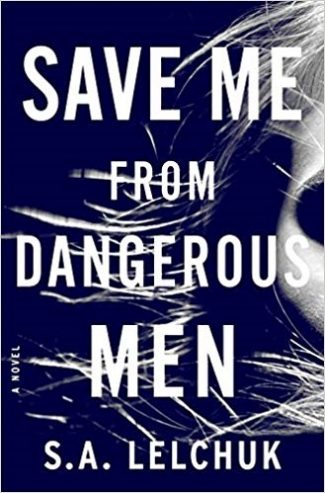 Save Me From Dangerous Men

Debut author S.A. Lelchuk’s Save Me From Dangerous Men is the first book in a series featuring Nikki Griffin, who uses her detective skills to take the law into her own hands to defend and protect women against toxic masculine predators.

I waited until he was halfway out of the chair. Off-balance, legs bent, weight shifting forward awkwardly.

Then I stepped forward and hit him.

I was a southpaw. Delivered a hard crack with my left hand. A short, twisting punch that had the full weight of my body behind it. Felt my fist explode into his nose with a crunch, the yielding, squishy feeling of cartilage. Different feeling than hitting a jaw or cheekbone or temple. A long time ago I’d gotten sick of busting my knuckles up. The armored motorcycle gloves were designed to hit asphalt at eighty miles an hour. They did wonders. Now I barely bruised.

He fell back into the chair, clutching his nose with both hands. “Shit,” he said.  His voice was muffled. “You broke my nose.”

I stayed where I was. Drew in another breath, let it out.  Controlling my breathing, my pulse. Scrapingly aware of every tiny detail like I was on some kind of drug. The world coming in sharp and clear, every movement, every sound. I chose my words carefully.

“You ready for another taste? Or do you need a minute?”

Nikki Griffin is a lot of things.

A woman with a bloody past and impulse control issues. A woman familiar with violence who believes in meting out punishments equal to the crimes. A woman struggling to save a brother from addiction. A woman who likes to teach bad men hard lessons.

She owns a bookstore, but that’s not her real career. Nikki loves books, but she loves righting wrongs even more; so while her friend Jess manages her bookstore—the Brimstone Magpie—she investigates and tracks men who’ve wronged women.

Some are merely cheaters, or are fighting divorce settlements. Those she handles with officially-submitted evidence and a long-range camera lens.

But there are others who require more than incriminating photos to learn the errors of their ways. And in those cases, Nikki is more than happy to sidestep legalities.

That week I quit my job at the shelter. I had started to feel that talking was inefficient. Clara’s husband helped me understand that certain people were wired in an unusual way. Like they had a switch that had been mistakenly preprogrammed in the Off position. So that their default mode was not wanting to listen. Talking to them first was pointless. They’d never hear a word. It was important, with those people, to reset the switch to On, so that they were in a position to take in important information.

Then they could hear just fine.

Everything became much easier. First reset the switch, then talk. Two steps.

…I kept at it and got better.

Then Nikki’s usual routine is disrupted by the CEO of a tech start-up, Care4. Gregg Gunn wants Nikki to do surveillance on an employee—Karen Li—who’s suspected of stealing and selling proprietary information.

Within days of taking the job, Nikki begins to suspect there’s something more going on. Something bloodier than insider trading and corporate espionage. Before long, Nikki realizes this job isn’t so different from her usual line of work after all: there are bad men at the heart of this, and they need to be punished.

Save Me From Dangerous Men is a helluva ride: a fast-paced neo-noir with a stellar new heroine at its core. Comparing Nikki to Lisbeth Salander is inevitable—a supporting character even calls her Lisbeth—but she also owes half of her DNA to old-school, hardboiled private eyes like Sam Spade and Philip Marlowe.

Her California is more technologically advanced and affluent, a little brighter, more colorful, and cleaner, than Raymond Chandler’s was. But the same seedy underbelly of greed and brutal violence lurks beneath the surface.

Fitting, since Nikki has plenty of brutality under her own pretty exterior, the result of a life irrevocably marked by violence. While the core mystery unwinds slowly, we spend plenty of time inside Nikki’s head, flashing back to the events that made her who she is: the fractured family, the hard-living brother, the many battered women who have crossed her path and needed her protection.

The men Nikki meets may be dangerous, but then so is she. And it’s always satisfying to see a female character give back as good as she gets, especially when it’s on behalf of other women.

Nikki Griffin is lethal because of her training and her arsenal and her willingness to act without hesitation, yes—but she’s also lethal because she’s so damn empathetic and emotional. Those are qualities women often have to apologize for, or tend to be portrayed as weaknesses, but with Nikki they’re probably her greatest weapons. She’s an avenging angel and a protector. Even near-complete strangers can trust her to do right by them.

And Lelchuk does a fine job of making Nikki complex, real, and relatable. She’s not just an ass-kicker. She fiercely loves her brother. She wants to have a normal, nice relationship with the sweet, somewhat naïve grad student Ethan. She’s built a new found family with manager Jess, bookstore cat Bartleby, and her regular customers. She struggles with opening up to her therapist. And with her passion for books, she’s more than just a brawler.

At that point in my life I only trusted books. Nothing else, no one else. Not even myself.

One type of book drew me more than any other. I read Wuthering Heights, The Hunchback of Notre Dame, The Count of Monte Cristo, The Cask of Amontillado, Carrie. Even then I was thinking about people who were wronged and people who did wrong. Even then I was wondering if wanting to do bad things to bad people made me the same as them, and if I cared. Even then I was thinking about Carson Peters and Jordan Stone. About the people in the books I read, and the many more people who must be in the world, planning evil. Hating the fact that I was a gangly teenager who had never saved anyone.

The thing that separated me from all those characters in my books was that, unlike them, I was helpless to help myself, let alone anyone else. At that time, I was filled with many different unpleasant emotions, but the helplessness was the worst. I hated it so much. I opened my eyes each morning thinking about Jordan Stone and Carson Peters opening their own eyes. I pictured them eating breakfast, walking around, talking, laughing. I didn’t talk much to anyone. Mostly I read, and thought, and remembered. But as I read, as the summer days passed, I began to hate myself a little less. I had books to thank for that. Books saved me, that summer.

There isn’t exactly a singular cohesive mystery here, but rather four or five plots of varying complexities that interweave around her Care4 investigation. Nikki herself remains the literal and figurative heart of the story, helping many and killing a few while marching through a four-week countdown toward a climactic encounter. There are several victories to savor along the way, and plenty of colorful characters—both good as gold and bad to the bone—to flesh out the cast.

With its balance of terse dialogue, real stakes, literary love, and thrilling badassery, Save Me From Dangerous Men is a must-read for fans of neo-noir and powerful women. Nikki Griffin is far too compelling and exciting to be a one-off character, and we can never have enough vigilante ladies—with any luck, Lelchuk will oblige us with a full series.