September 9, 2021
In Robert B. Parker's Stone's Throw by Mike Lupica, the untimely death of Mayor Neil O’Hara rocks the town of Paradise and its police chief Jesse Stone. 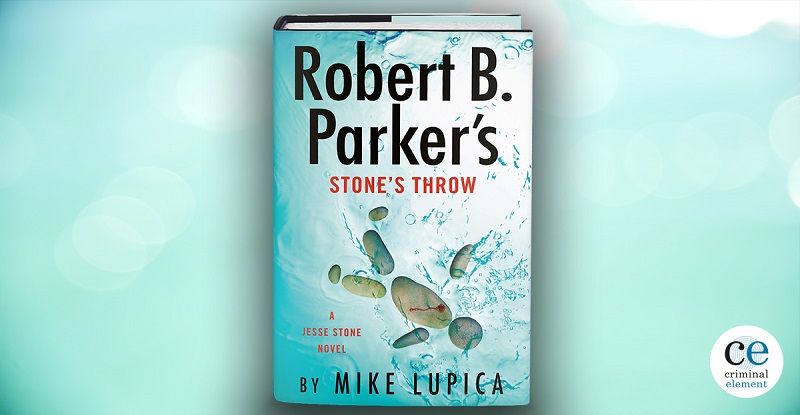 Sometimes Chief of Police Jesse Stone just has to wonder whether trouble is a given in his hometown of Paradise, Massachusetts. Local landowner Thomas Lawton III wants to sell a prime piece of beachfront real estate, known as The Throw, that two developers are none-too-politely salivating over. Billy Singer is a Vegas impresario looking for a piece of East Coast action. Ed Barrone is a Boston businessman responsible for building two of the first non-tribal casinos in Massachusetts. Neither has a reputation for clean dealings, but each is promising a big payday for the town of Paradise if either should win the tender to develop The Throw.

The main obstacle to their plans is the efforts of a local group of environmentalists called Save Our Beach. The young activists have made a habit of digging shallow graves throughout The Throw and adding headstones proclaiming RIP Paradise. While Lawton is livid at the transgressions, in reality the protestors are doing little more than making a public relations stink: the town council will, in all likelihood, approve the sale and accept a bid from either Singer or Barrone. Jesse is still tasked with the thankless job of listening to rich, connected Lawton complain about the vandalism, so he’s not thrilled to find yet another shallow grave on one of his nightly beachside walks. His displeasure turns to outright horror when he realizes that not only is this grave occupied, but that the dead body belongs to his boss, Mayor Neil O’Hara.

Soon, Jesse is caught in the middle of a turf war, as Singer and Barrone, usually through the actions of their hired goons, make his life increasingly miserable. It’s not just the two real estate guys who are throwing obstacles in his path, however. Even Acting Mayor Gary Armistead is getting in on the action, insisting that Neil’s death was a suicide, no matter what Jesse discovers. Short-handed and not exactly flush with funding to begin with, Jesse has to do the best he can with what he’s got, even when trying to stake out a house that might be a target for criminals searching for an elusive MacGuffin:

Maybe, Jesse thought, he should put a car out front, all day every day in the short run, on the chance they might come back. Whoever they were. Whatever they were looking for. But knew he didn’t have the manpower for that. So he went back to the Explorer now and got the motion sensor out of the glove compartment and came back and set it in the front room. Cost him twenty bucks on Amazon. He’d been waiting to use it. CSI Paradise, he thought.

It’s partly this need to use all available resources that allows him to come to a detente with known criminal Wilson “Crow” Cromartie, who’s suddenly appeared back in town. Crow is in Paradise for his own purposes, which may or may not have to do with the lingering sexual tension between him and Deputy Chief of Police Molly Crane. When Molly is injured in the course of performing her duties, Jesse tasks Crow with keeping an eye on her house, a request that displeases Molly even if she understands that it’s for the best. Mostly, Molly hates that Jesse and Crow seem to be bonding because of her:

She was calling him from home.

“You could invite him in for breakfast,” Jesse said.

“You’re aware you keep sending me mixed messages on that guy,” she said.

“Keeps the spark in the relationship.”

Molly said, “Yours with me or yours with him?”

With uneasy alliances and ruthless criminals skulking through Paradise, Jesse has his hands full trying to bring his former boss’s murderer to justice. His efforts provide reliable entertainment in this twentieth book of the long-running series, as several supporting characters in the Robert B. Parker Universe come to the forefront of Jesse’s life while others fade into the background over the course of a tumultuous few weeks. Crow is a welcome addition here, not quite a vigilante, but still determined to have both Jesse’s and Molly’s backs as they search for the truth.

Mike Lupica does an excellent job of continuing Jesse’s story in a manner that’s both faithful to Mr. Parker’s style while also keeping abreast of current affairs and mores. The references to Covid-19 are timely, if depressingly accurate, while the sharp, often self-deprecating humor leavens an otherwise serious novel of shady dealings and outright murder. Mr. Lupica is a terrific standard bearer for this extended series, and I’m eager to read more.