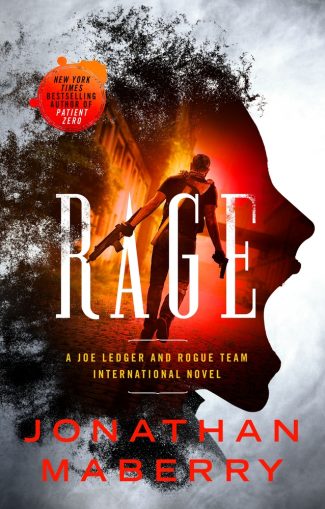 Rage is the first in a brand new series featuring Joe Ledger and Rogue Team International, in which Ledger’s elite team must protect the world from a bio-weapon that drives people insane with murderous rage.

Jonathan Maberry has had much success in his career, featuring a diverse list of novels he has written as well as various anthologies he has edited. He is a five-time winner of the Bram Stoker Award. He burst on the scene with his vampire trilogy—Ghost Road Blues, Dead Man’s Song and Bad Moon Rising—providing a different take on the over-populated vampire genre that is one of the best and most original I have ever read.

However, he is best known for his most prolific character—Joe Ledger. Ledger is so popular that Maberry’s series featuring him has already been optioned for a TV/Cable series. Rage marks the 11th full-length novel featuring Joe Ledger and a change in the series as it represents the first international Joe Ledger novel. This time around, our favorite ex-Special Forces guy is leading an eclectic team of like-minded folks from all over the globe. His new Havoc team is prepared to hit the ground running and take on any issues that require an immediate response to global threats.

Unfortunately for Joe, his first case with his new international team may also be his last. A small island off the coast of Korea is all but obliterated by an airborne bio-weapon that creates a murderous rage in all who get just a whiff of it. Maberry does a great job of taking this plot and infusing it with real-world characters and problems—like Kim Jong-un’s desire for a nuclear weapon that he can threaten China, Russia, or even America with. All of those countries play a part in Rage as they realize that the bio-weapon used on the small Korean island could cripple their populations.

The main villain is simply known as Kuga. While his real identity is not uncovered until much later in the story, his number two is someone who is already well known to Ledger —a murderous convict named Santoro who is a master of torture. Santoro has a demented young couple, nicknamed ‘Adam and Eve’, working directly for him and doing much of his dirty work. Maberry incorporates all sorts of cool nicknames and most of the players on Ledger’s team have one. Ledger himself answers to ‘Outlaw’ and that goes just fine with some of his colleagues that bear interesting monikers like ‘Bug’, ‘Violin’, ‘Bunny’, and the person Ledger reports to who is known merely as ‘Church’.

Everyone under Church’s guidance has a unique skill-set and all of their talents will be put to the test when Kuga plans to release the rage bio-weapon during a meeting of several International leaders. Church subscribes to the mantra: ‘Peace through vigilance and action’. Regrettably, sometimes the problems they face may require a slightly ramped up version of this in order to save the planet and everyone on it. Ledger realizes that this threat is criminal and not political and must be met with equal or greater violence via extreme prejudice.

Rage is not for the faint-hearted as your heart will be in your throat during the non-stop action that Jonathan Maberry has created. Bringing Joe Ledger to the international scene, Maberry has started a new chapter for his protagonist, raising the bar for a thriller series that was already one of the best in the business!