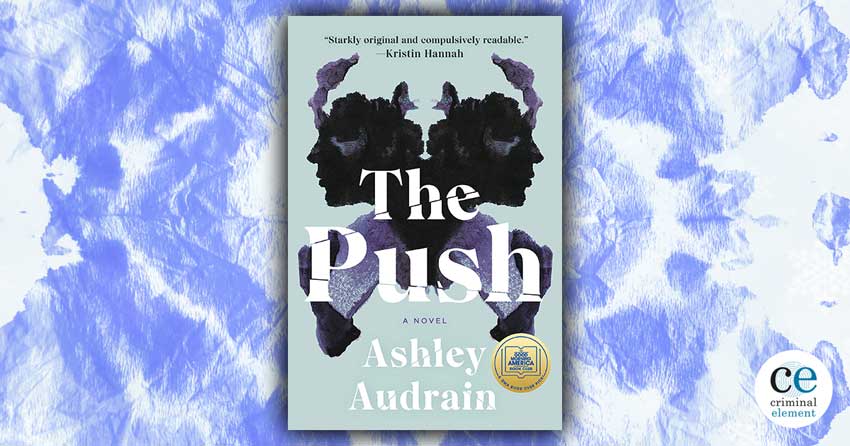 The Push by Ashley Audrain is a debut novel and a tense, page-turning psychological drama about the making and breaking of a family and a woman whose experience of motherhood is nothing at all what she hoped for but everything she feared.

College sweethearts Blythe and Fox Connor have a charmed life and romance. With Fox and his parents, Blythe finally has the loving, supportive, stable family she’s always longed for and a future that looks nothing but bright.

Then, Violet enters the picture.

Blythe thought she was ready for motherhood—that she wanted to be a mother. She read the books, attended the classes, joined the mommy groups, and all the while, she promised herself (and her unborn daughter) that she wouldn’t be anything like her own mother. But from the day Violet enters the world, everything seems to go wrong. From the very beginning, the baby Fox dotes on and everyone swears is perfect and lovely strikes an awful chord in Blythe.

Violet cried only when she was with me; it felt like a betrayal.

We were supposed to want each other.

As the months pass, the feeling of wrongness only intensifies. Violet has self-destructive tantrums, refuses to be calm, fights and screams incessantly—but only in front of Blythe. A chasm begins to grow between mother and daughter, then Blythe and Fox, and all the while, Blythe is filled with shame and guilt.

Why is this so hard? What is she doing wrong?

Why does Violet seem to hate her at an instinctual level? And is there truly a darkness growing behind that tiny face?

For years, Blythe’s fears are ignored and unspoken. She learns to keep them to herself; nobody wants to hear them, let alone believe them. Until, one day, someone else notices Violet’s odd behavior.

The spring after Violet turned four, her preschool teacher asked us for a meeting after school on a Friday.

“Violet is an exceptionally bright child. She’s mature for her age in many ways. She’s very … astute.”

But there were incidents that had caused her classmates to be uncomfortable with her. She gave us the example of a boy who was scared to sit near her because she sometimes twisted his fingers until he cried. A girl who said Violet stabbed her thigh with a pencil. And that morning, during recess, someone said Violet pulled down their pants and threw handfuls of rocks in their underwear. My face grew hot and I covered my neck, sure it was blotching. I was embarrassed that we’d created a human being who would act this way

“She’s apologetic when told to be, yes,” the teacher said hesitantly when you asked her. “She’s smart. She knows her behavior is hurtful, but this hasn’t seemed to deter her like we’d expect. At this point, I think we need to introduce consequences.”

It’s a small moment of vindication. Finally, someone else has noticed Violet’s lack of empathy and streak of cruelty. But Fox is still quick to brush it aside.

Unfortunately, things will only escalate from there. In the end, Blythe, like Cassandra before her, understands exactly how it feels to have all of her warnings go unheeded and her life completely shattered.

The Push is a shocking, deeply unsettling debut from Ashley Audrain and a story that will linger long after you put down the book. In the same vein as We Need to Talk About Kevin and The Bad Seed, this is a tale of the darker side of motherhood and the horror that comes from innocently, unwittingly, creating a monster. A novel that asks that age-old question: nature or nurture? Are people born bad or made that way?

It’s a story only a mother could tell; Audrain’s beautiful prose rings with truth as Blythe is battered down physically, emotionally, and mentally beneath the dual hammers of societal expectations and Violet’s sociopathy.

And it’s also a searing tragedy of generational trauma—as we see not only Blythe’s story but also her mother Cecilia’s and grandmother Etta’s—and a terrible cautionary tale about the ultimate toll of gaslighting. There’s plenty of horror to be found in The Push, and all of it will be especially visceral for the women and mothers in the audience.

Blythe, our narrator, never flinches away from telling us the hard truths of her experiences. She’s a fully realized woman whose breath you can almost feel in your ear. At times, there’s a temptation to look away from what she’s showing us, as if that will somehow avert the inevitable, but The Push, like a train derailment, demands (and earns) our full attention.

Audrain has delivered one of the most female-focused thrillers yet, an unrelentingly bleak, stark story that pairs perfectly with the gray intensity of Winter 2020. Don’t pick up The Push unless you’re prepared to be pushed to the very edge—those that are, though, will find themselves breathlessly devouring Blythe’s tragedy in one or two sittings. It’s a tale that grabs you by the throat from the very first sentence, and it doesn’t let go until you’re free-falling into the abyss.