Book Review: Pray for the Girl by Joseph Souza 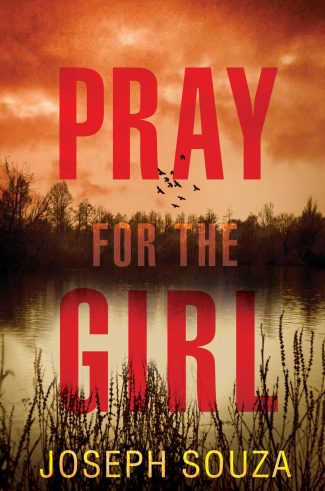 Pray for the Girl

Joseph Souza, acclaimed author of The Neighbor, brings readers into the dark heart of a small town in this riveting, relentlessly twisting new novel . . .

The title of Thomas Wolfe’s autobiographical novel You Can’t Go Home Again perfectly describes Lucy Abbott’s return to Fawn Grove, Maine. Should she have returned home, or would it have been better to stay in New York City?

Lucy overhears her sister Wendy talking to her husband about a shocking murder. The body of a young Afghani refugee was discovered by a passing kayaker: “rumor had it that she’d been buried up to her chest and then stoned.” Lucy is in a low place mentally.

To say that I was in a bad frame of mind during this conversation was an understatement. My current woes included PTSD, anxiety, and depression, and they were all acting in unison to cloud my thinking. I hadn’t experienced such helplessness in a long time. As much as I tried to disassociate myself from the conversation my sister was having with her husband, I ended up hearing every last word of it.

Lucy, a talented sous-chef, abruptly quit her job to come home, rattled by the “heinous crimes” that had become an everyday backdrop to her life: “the sound of police sirens became like elevator music to my ears.” Lucy isn’t just battling mental demons—during her tour of duty in Afghanistan, she was gravely injured, losing both of her lower legs in an explosion. A murder in her hometown is not helping her heal. Or might it serve as a catalyst to bring her out of a crushing mental and physical funk?

But back to the girl’s murder. I’d allowed a girl to die while serving as a combat medic in Afghanistan, and I vowed never to let that happen again. Not on my watch, anyway. It still weighs on my conscience. It’s part of the reason I left New York City and returned to Fawn Grove. The pain of that memory lingers long after I left the battlefield. Healing both body and mind takes time as well as effort. I thought if I could only confront my past and let it go, everything would be better. But I found that I couldn’t. It was too painful.

But “everything happens for a reason,” Lucy thinks. She has come home to “Fawn Grove: the veritable armpit of Maine,” to “find out who killed this girl.” Lucy will atone for the death of the local girl in Afghanistan by finding justice for the young refugee who was killed in Fawn Grove. That means coming to grips with the changes to Fawn Grove in the last fifteen years. The paper mill that once “employed half the town”—and paid its workers well—is in its death throes, shrunk to producing a single product. The biggest change is an influx of immigrants from Afghanistan. Some townsfolk refer to Blueberry Hill, the Afghani neighborhood, as Mecca. A bleak mill-town on its last legs doesn’t seem like much of a paradise to Lucy.

I can’t imagine escaping from some shitty war-torn parcel of dust only to be moved halfway across the world to Fawn Grove. To arrive upon our frigid Maine shores and realize that in many ways America is a more dangerous and depressing country than the one they left behind.

Prejudice and economic anxieties separate the native Mainers and the refugees who have landed in Fawn Grove. Lucy’s memories of her formative years growing up, her horrific journey to tenuous health after getting injured, plus her phenomenal skills at serving up delicious food, coalesce as she dons a private detective mantle. The Galaxy Greek diner, a shadow of its former self, is Lucy’s entry point back into the community. The food is abysmal, and Lucy doesn’t hold back the criticism. Yanni, the aging chef/owner gives her forty bucks, tells her to go out and buy food and show up in her chef’s whites: let’s see if she can do better.

Yanni expects instantaneous results on a pauper’s budget. It’s as if my sudden presence here is supposed to make customers magically appear. Wolfgang Puck and Thomas Keller working in unison couldn’t resurrect this shithole under his thumb. Returning this diner to its former glory will be an uphill battle. The Galaxy’s good name has been dragged through the mud for so long now that it may never fully recover.

A menu of “pillowy omelettes, fresh cheddar/bacon biscuits, and buckwheat pancakes made from scratch,” is so out-of-the-ordinary for the denizens of Fawn Grove that they fall back on their “circular brick patties of industrial beef topped with processed yellow cheese.”

Joseph Souza gives the reader two paths—one that spirals down into poverty and despair. Some, like Dalton, the town’s detective, say that’s inevitable. When Lucy says she might stick around Fawn Grove, he wishes her luck: “Because Fawn Grove will break you like it’s broken everyone else in town.” The other path is exemplified by the moral of Voltaire’s Candide—“cultivate one’s own garden.” In other words, “take care of your own, and the world will take care of itself.” The images that linger in Pray for the Girl are of Pam, Lucy’s high school classmate roasting coffee beans to make “an exceptional cup of coffee,” and of bountiful fruits and vegetables and exotic spices for sale in an Afghan grocery.

Lucy more than atones for the girl’s death years ago, halfway across the world. Her investigation rips a Band-Aid off the secrets and cruelty that fester below the surface of Fawn Grove but with the ugliness bared, the town can look inward, make amends, and ultimately, move on.