Book Review: Potions Are For Pushovers by Tamara Berry

December 13, 2019
Potions Are For Pushovers is the second in the Eleanor Wilde Mystery Series, where con artist and witch Eleanor Wilde must solve the murder of a fellow villager in order to prove her own innocence. 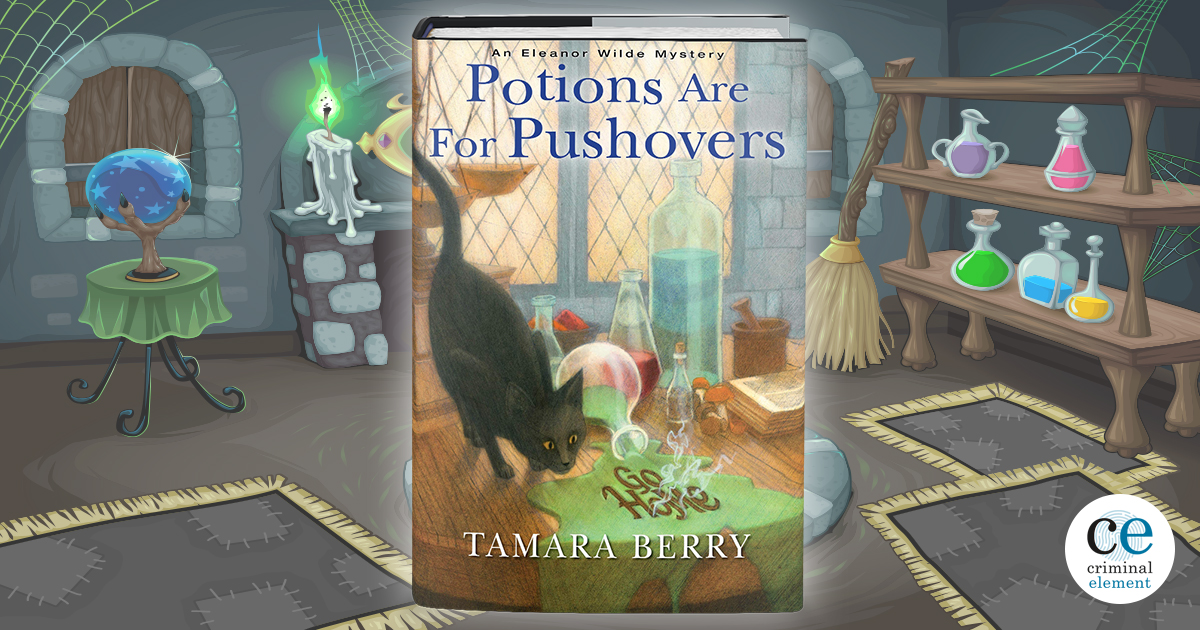 This is one of the most delightful paranormal cozy mysteries I’ve ever had the pleasure of reading! Our heroine, New Yorker Eleanor Wilde, is slowly settling into life in a bucolic English village after the events that originally brought her here in the first book in the series. She’s taken up the position of village witch, selling magical elixirs and potions to lovelorn locals—all nonsense, of course, as she’s a charlatan through and through. Necessity caused her to embrace the life of a con artist, pretending to psychic abilities that she absolutely does not have. What she does have is a heart of gold and a faith in the power of the mysterious to gladden the soul, as she goes about her sometimes secretive business in the village:

I grab my handy fence-fixing bag on the way as well as a few flax flowers I keep perennially growing in my garden. It wasn’t just Mr. Worthington I sent to the evergreen crossroads; I make all my clients plant flax seeds in that location as part of their rituals. It totally freaks them out when they pass by to find fully grown flowers where they placed their seeds only a few days previously. Anyone with knowledge of horticulture would be able to tell that the soil is loose and the roots haven’t yet taken hold, but that’s a risk I’m willing to run.

Besides, it makes people happy. To see living proof of magic, to believe wholeheartedly in the power of something miraculous, is more therapeutic than a lot of so-called medical remedies these days.

While rituals and potion-making are helping her make ends meet, she’s starting to worry that she’s not integrating as well into village life as she should be. The wealthy Hartfords who originally hired her to rid their castle of a haunting are firmly in her corner, but not everyone else seems to be taking to her. Vivian Hartford decides to help by volunteering Eleanor for the village fete planning committee. But when one of the other committee members drops dead at Eleanor’s very first meeting, the rumor of poison quickly spreads, as does rumor that Eleanor was the person responsible.

Eleanor is mystified at this, as she barely even knew the victim. But as the rumors begin to hurt her trade, she becomes determined to find the real killer. Despite her frenemy status with the representative of local law enforcement, Inspector Peter Piper, they both know she has the skills to do it:

Inspector Piper studies me with the intensity I’ve come to expect from our interactions with one another. He hates I’m just as good at this investigative stuff as he is, even without years of academy training and a badge hanging around my neck. I’d feel bad for him, but he must know by now that a person doesn’t become a successful fake psychic without some natural talent. I’m better able than most to take a step back from situations, to detach myself emotionally and watch for the inevitable clues that people let fall.

It’s not a skill that comes from a happy place.

The depth and wit of this novel set it apart from its brethren, as Eleanor must deal not only with a murder but also with her personal hurts as she forges ahead with her relationship with the very handsome and wealthy Nicholas Hartford. There’s also a delightful subplot involving two young ladies who have decided to apprentice themselves to her. The two are advocating for the theory that a werewolf is behind not only their fellow villager’s death but also the recent disappearances and maulings of local pets and livestock. Eleanor soon finds herself in the ironic position of trying to keep the girls’ investigative streaks from placing them in danger, even as otherworldly events begin to challenge her own fervent belief in the rational over the paranormal.

I devoured Potions Are For Pushovers. It’s a fast-paced, hilarious read with truly interesting characters that I very much enjoyed spending time with. Tamara Berry writes with a pitch-perfect authorial voice, depicting a modern American woman somewhat adrift in a traditional British town. With some really diverting curveballs thrown into the narrative, this felt like the quintessential paranormal cozy read. I can’t wait to read more from this author!