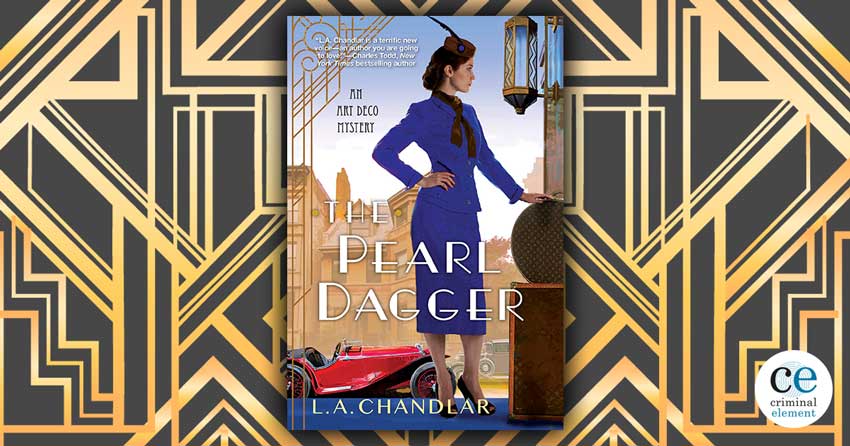 The Pearl Dagger by L.A. Chandlar is the third book in the Art Deco Mystery series, where the Great Depression loosens its grip on New York City and Mayor La Guardia and his team meet their greatest foe in the fight against organized crime.

Lane Sanders—aide to New York City Mayor Fiorello La Guardia—has a knack for getting mixed up in excitement. Thanks to her work with the Mayor, a colorful dynamo of personality, she’s in a key position to witness political showmanship firsthand. And thanks to her parents, undercover operatives who were instrumental in bringing down notorious mob boss Rex Ruby, she’s inherited plenty of mysteries and secrets—secrets that may come back to bite her.

When a new leader of the Red Scroll crime network emerges, it’s someone Lane has very personal reasons to hate and fear. Then, a gambling racket proves deadly for a friend, and the trail leads to London. So Lane and her detective boyfriend, Finn Brodie, are sent to England in search of answers—answers that may be tough to get when Finn’s past interferes. A family drama worthy of Orson Welles’s Voodoo Macbeth has been playing out for years, and the final act begins when Finn and Lane arrive in London.

Luckily for them, Lane’s sharp, quick to act, always armed with her father’s pearl dagger, and has a plethora of helpful allies, including some very familiar faces:

Right at that moment I heard a rather loud and deep command, “I want that gin ice-cold and neat. One olive. Just glance at the vermouth bottle briefly and give the gin a decent pour.”

Miles was smiling freely; I’d never actually seen that look on his face. “Here’s my contact now, in fact.”

Finn and I turned together toward the loud voice. The bartender looked like he was fully aware of the man’s strange feelings toward vermouth, a slight grin pulling at one side of his mouth.

“Here you go, Mr. Churchill. Just the way you like it.”

The Pearl Dagger, the third in L.A. Chandlar’s Art Deco series, is a whirlwind of a story. The heroes rush into and out of scrapes, revelations fly fast and hard, and emotions run high. The plot careens from criminal conspiracies to Machiavellian family drama to chases and gunfire. There’s hardly a chance to catch your breath before the next bit of excitement and intrigue hits.

The dialogue is snappy, there’s plenty of romance sprinkled throughout, and the Art Deco setting is wonderfully vibrant and vital. Post-Depression New York and London come alive again in The Pearl Dagger—you can practically hear the big-band music blaring from the Savoy.

The cast is exceedingly colorful and cinematic. Leading lady Lane escapes thugs by climbing out of 12-story windows and shocks society by throwing her stockings into the Thames. Criminal masterminds hide out in lunatic asylums, pretending to be insane while consolidating their power. There’s a team of street urchin Irregulars, spies in the corner booths of pubs, bohemian aunts, and handsome cops.

And there are plenty of iconic historical figures. Mayor La Guardia is an especial standout, so larger than life that it’s hard to believe he really existed. Winston Churchill, on the verge of becoming a major political player, makes an appearance, as does a young Orson Welles and the literary group known as the Inklings, led by J.R.R. “John” Tolkien and C.S. “Jack” Lewis.

Chandlar does a grand job incorporating fact into her fiction; her weaving of historical detail and characters into the madcap action is definitely her greatest strength.

And, more than anything, the Art Deco series is chock full of wish-fulfillment. It’s great fun putting yourself in Lane and Finn’s shoes, rubbing elbows with some of the most powerful people in history, sailing on the Queen Mary, chasing baddies worthy of the pulpiest Hollywood movie, and saving the day with panache and a quip. If you love history and hijinks, you can’t go wrong with The Pearl Dagger.