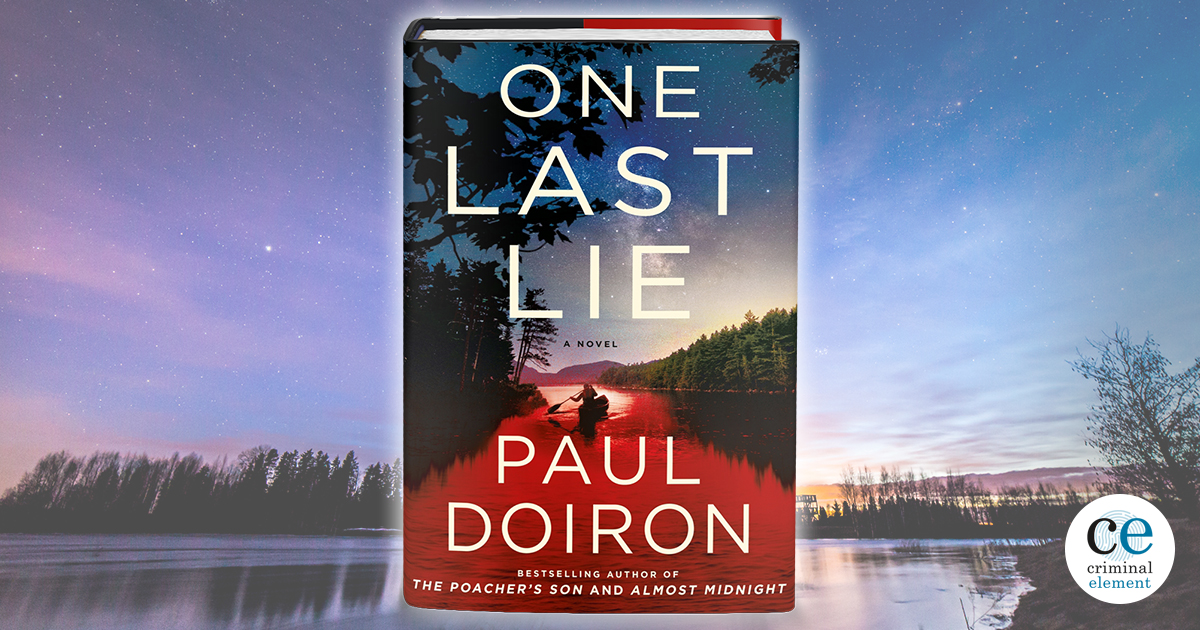 Mike is off his game from the get-go in One Last Lie, thanks to Charley Stevens.

Before I left for Florida, my old friend and mentor Charley Stevens gave me a puzzling piece of advice. “Never trust a man without secrets.”

I thought he’d misspoken. “Don’t you mean a man with secrets?”

But the retired game warden only winked as if to suggest he’d said exactly what he’d meant to say. It would be up to me to figure out the meaning of his cryptic remark.

Might it be as simple as someone who seems too good to be true probably is too good to be true? Mike is in Florida to check out air force vet Tom Wheelwright, a seemingly great candidate for the Maine Warden Service, but he has “vague yet creeping doubts.”

When I’d asked him why he wanted to trade the salary of a Learjet pilot for that of a Maine State employee, he said he hoped to raise his kids somewhere that “still felt like a real place.”

It was a good answer.

Still, I couldn’t shake the feeling that Wheelwright was not the paragon everyone swore he was.

Eventually, Mike looks for a person who isn’t there, “a name conspicuous by its absence from any of the files I’d been given.” Why wasn’t Captain Joe Fixico, “Wheelwright’s electronic warfare officer,” part of Wheelwright’s disclosure list? Sure enough, Fixico knows where the bodies are buried—he tells Mike that “pilots are held to different standards. Especially when it comes to reports of inappropriate conduct with the other sex.” Mike tells his superior, “an unabashed champion of Tom Wheelwright,” that they shouldn’t hire him, but Wheelwright’s efforts to smear his former air force co-worker, to circumvent the system and go around Mike’s negative recommendation, continue unabated. Mike’s doggedness, his unwillingness to take anything at face value, is at the backbone of One Last Lie.

The eleventh Mike Bowditch mystery is personal for Mike: his surrogate father, Charley Stevens, has disappeared and his wife doesn’t know why. She doesn’t think Charley wants her to know, as indicated by his note: ‘I love you, Ora. I’ll be back as soon as I get a puzzle sorted out.’ After Ora calls him, Mike returns to Maine asap. Ora is in a wheelchair, which limits her ability to search for clues, obviously not an issue for Mike. His problem is how he feels about Charley.

He had taught me how to do my job, enforcing the state’s laws while staying true to my inner compass. Most importantly, he had instructed me in what it meant to be a man in a cultural moment when masculinity was presumed toxic until proven otherwise.

The nub of it is, as Mike admits to himself, “… in running off without explanation from his beloved wife, Charley had behaved like someone I didn’t recognize.” Even at thirty-one, “too old to believe in heroes,” Mike is afraid that at the end of the day, he won’t feel the same way about a man whom he has always respected and revered. The ambiguous letter Mike discovers in Charley’s floatplane alludes to a long-ago mistake, a “moment of weakness,” but there’s no explanation why Charley left “like a thief in the night.”

I know you well enough to reckon that you won’t heed my words of caution. Which is why I am leaving you in the dark, too. I will cover my trail to keep you from following, but I fear I may have taught you too well.

I love you, son. Don’t come after me.

Mike painstakingly reconstructs Charley’s routine. A few days ago, Charley and Ora were at a flea market and Charley got into it with a disheveled “ruin of a man.” Ora’s artist friend Carol Boyce describes him to a tee.

He had a kerchief around his bald head and a scraggly beard, more gray than black; wore dungarees and a flannel shirt, no sleeves. He never removed his sunglasses, but they looked cheap, like ones you might choose from a rack at the gas station.

Her detailed description made me wish more of my witnesses were visual artists. “Did you catch his name?”

Unfortunately not, but by dint of persistent questioning (Mike) and an artist’s focus on visual details (Carol), she recalls that Charley grabbed something off the man’s table that “was small enough to fit in his hand.” Mike reconstructs the scene circuitously: what items does Carol recall seeing on the vendor’s table? Then his phone rings.

“He also had a badge,” Carol Boyce said.

“He had a badge for sale. Seeing yours made me remember.”

In reaching for my phone, I had exposed the badge clipped on my belt.

“It was a game warden’s,” she said, “only smaller and tarnished. And it had a number on it. Don’t bother asking me what the number was. I just happened to have noticed because the digits were so clumsily engraved in the metal.”

That’s the breakthrough Mike needs. He “convinces” the slimy flea market vendor to tell him how he acquired the badge and then methodically tracks down and interviews anyone who can shed light.

It hadn’t escaped my notice that, in his letter, Charley hadn’t mentioned the badge that had precipitated his disappearance. The omission had been deliberate because he knew it was a clue that I would follow. The Warden Service had stopped stamping identification numbers on its badges back in the 1950s, long before Charley had even joined the bureau.

Whose could it have been?

Mike finds out it “belonged to a warden who was presumed dead fifteen years ago but whose body was never recovered.” Scott Pellerin, “too cocky for his own good,” was working undercover along the thousand mile Maine/Canadian border. Scott reported to Charley Stevens, but their relationship was very much like the one Mike and Charley have now. The badge belonged to Scott’s grandfather, Duke Dupree, “a warden back during the Depression.”  Charley’s oldest friend, Native American Nick Francis, listens impassively to Mike’s explanation of why Charley went AWOL.

“For some reason, the reappearance of Duke Dupree’s badge has made him rethink the events of fifteen years ago. He realized he had been misled.”

“Is that my theory?” said Nick. “I’m smarter than I thought.”

“It explains why Charley would want to check things out on his own—in case the man who murdered Pellerin has been preparing for the day when he was finally found out.”

They say revenge is a dish best served cold: Charley, with Mike hot on his heels, is poking a stick at a cold case that threatens to ignite into a massive scandal, particularly if the person(s) responsible for Pellerin’s murder are inside the Warden Service. Paul Doiron surprises the reader at every turn. At the crux of the story: is Mike tracking down Charley or is Charley pulling Mike’s strings? This is my first Mike Bowditch mystery but I can’t wait to start at the beginning, with The Poacher’s Son. Author C.J. Box’s sums up the first Mike Bowditch mystery beautifully: “Excellent … filled with murder, betrayal, and a terrific sense of place,” words that could equally be applied to One Last Lie. Maine, particularly its wild, untamed places that come to life on every page.