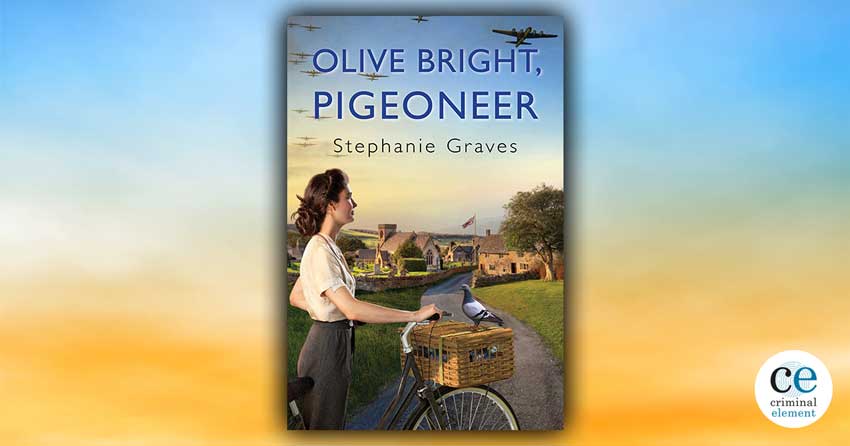 Olive Bright, Pigeoneer by Stephanie Graves is the first in a new, charming historical mystery series set in a charming British village during World War II, where a spirited young pigeon fancier finds herself at the heart of a baffling murder.

Olive Bright is worried—and for good reason. Her best friend, George, has been called off to war after she herself was evacuated from veterinary school in London back to her Hertfordshire home. Now, she helps with her father’s veterinary practice while her family waits anxiously for news from the National Pigeon Service (NPS). Dr. Rupert Bright had offered the expertise and personnel of Bright Lofts, renowned for their racing pigeons, for the war effort, with one caveat: he himself must be actively involved in the process. As the weeks pass without word, their dwindling supply of pigeon feed has Olive, the pigeons’ primary caretaker and trainer, nervous that a lack of interest from the NPS will mean a hard winter for her birds should the war against the Nazis stretch even longer than already predicted.

So she’s greatly relieved when two uniformed officers show up asking after her pigeons. She’s less thrilled to discover that they’re not with the NPS but with Baker Street, a covert British intelligence operation with an outpost at the nearby, requisitioned Brickendonbury Manor, formerly the boys’ school she herself had attended. If Olive wants her pigeons to be involved with the war effort—and to gain bags of much-needed feed—then she’ll have to do it in complete secrecy, under the supervision of the sardonic Captain Jameson Aldridge.

Olive reluctantly accepts. As cover, they pretend that Jamie, as she insists on calling Captain Aldridge, is her beau and, later, that he’s recommended her for a position at the Brickendonbury Manor station. Olive already has a lot of sneaking around on her mind even before she stumbles across a family friend, the perennially self-righteous Verity Husselbee, haranguing various villagers as to their supposedly deep, dark secrets. Miss Husselbee is perhaps taking her project of observing and reporting on suspicious goings-on to the Crown a little too seriously. Olive’s lively mind can’t help comparing Miss Husselbee, nicknamed the Sergeant Major for her imperious nature, with the characters of Olive’s favorite books.

[A]ccording to Poirot, cold-blooded, deliberate murder was motivated by gain, jealousy, fear, or hate. Judging by the feelings of much of the village toward Miss Husselbee’s meddling ways, she might be a bit of a risk. The bad luck of it was that the Sergeant Major was effectively the Miss Marple of the village—ferreting away little bits of gossip and then bringing them to bear on the guilty parties—although she tended to be much more strident about it. Who, then, would solve Miss Husselbee’s murder?

Olive shrugged. If it came to that, she’d do it—she’d learned a good bit from Poirot’s order and method.

Good thing Olive has already reconciled herself to the idea, as Miss Husselbee’s interfering ways find her done to death in front of Bright Lofts just a few nights later. While Jamie discourages her from emulating her fictional heroes, Olive hates to think of a murderer getting away scot-free. Sure Miss Husselbee was unpopular in the village, but that’s hardly a reason for murder. Unfortunately, the more Olive digs into Miss Husselbee’s list of enemies, the more unseemly information she discovers—information that could not only upend her entire life but possibly end it too.

Olive Bright, Pigeoneer is a well-researched tale of a little known facet of World War II, focusing on the valiant homing and racing pigeons who overcame daunting odds to deliver messages crucial to the Allied victory in Europe. Stephanie Graves illuminates the contributions of the birds and their handlers so vividly and has created in Olive a delightfully spunky protagonist through whose eyes we view the proceedings. How can you not root for someone so resourceful and determined to do her part, ensuring the survival of her birds in the process?

As her gaze ranged over the dovecote’s inhabitants, her thoughts flashed back to the fairy tales she’d devoured as a girl. Here they all were, locked away in a tower, waiting to be saved. Well, in truth, they were waiting for a chance to do their bit in this war. She snorted, startling a young grey that had wafted closer, likely ready to eat. “We don’t need a hero, ladies and gents,” she said briskly. “Because we are going to save ourselves.”

This is an entertaining debut novel in a series that promises lots of wartime intrigue deftly intertwined with cozy village murder shenanigans, as Olive follows in the footsteps of her literary heroes to win the day. The literary references sprinkled throughout also make for fun parallels with the main plot, particularly in the staging of Pride & Prejudice overseen by Olive’s stepmother. I wasn’t a huge fan of Jamie nor of Olive’s burgeoning interest in him, but I found the rest of the cast charming and look forward to spending more time with them all in future books.