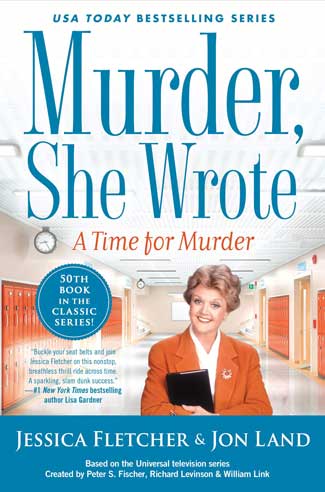 Murder She Wrote: A Time for Murder

Murder, She Wrote notched an indelible place in pop culture from the very moment Angela Lansbury first embodied the role of author/amateur sleuth Jessica Fletcher in 1984 until she signed off 12 years later; that legacy was further cemented with a tie-in book saga that launched with 1994’s Manhattans & Murder. The late, great Donald Bain would pen 45 additional titles—many in collaboration with his wife, Renee Paley-Bain—before his death in 2017. Jon Land, known best for action-oriented suspense stories, assumed authorship with A Date with Murder (2018), continuing to perfect a cozy/thriller hybrid in Manuscript for Murder and Murder In Red. His latest, A Time for Murder, marks the series’ landmark 50th entry.

As the story opens, Jessica finds herself at Mara’s Luncheonette, where she’s agreed to be interviewed for the Cabot Cove High School newspaper, The Eagle. But rather than being asked the usual questions about her career as a novelist and what advice she’d give to aspiring writers, her interviewer, Kristi Powell, inquires about a far more personal matter: “When did you solve your first murder?” The topic—which awakens painful memories from an earlier chapter in her life—is one that Jessica has never spoken of publicly, and she politely declines to discuss. Hindsight and a respect for the young reporter’s ambition lead her to reconsider, but a visit to the local high school reveals that her interviewer was actually an impostor posing as a student.

Said impostor soon turns up dead in her car, the victim of a gunshot wound to the head. She is later identified as 33-year-old Ginny Genaway, née Reavis—a surname that Jessica recognizes from her own years teaching in nearby Appleton, Maine. Twenty-five years ago, Ginny’s father, Walter Reavis—a high school principal and Jessica’s champion—was bludgeoned to death in his office, and Jessica ably assisted the local authorities (led by one Amis Tupper) in solving the case. She then relocated to quaint Cabot Cove (as did Tupper), taking up residence at a stately white Victorian on Candlewood Lane (still under repair after the events of Manuscript for Murder). Ginny’s murder brings those events back to the forefront, causing Jessica to wonder if she was party to a miscarriage of justice.

Two timelines converge as Jessica must reconcile the past with the present. Consequently, readers get to meet her as a young substitute English teacher with authorly ambitions of her own for the very first time, along with her oft-mentioned but never before seen husband, Frank. They have no children of their own but care for a precocious nephew, Grady, who will later launch his aunt’s literary career by submitting The Corpse Danced at Midnight for publication in secret. (This is but one of several references to the show’s pilot episode). Despite the exposition, narrative urgency seldom falters; indeed, an escalating body count and the impending reunion of Appleton faculty and staff ensure forward momentum and a fortuitously frenetic finale.

It’s an ambitious premise and one worthy of the occasion at hand. In addition to double doses of murder and mystery that are interconnected by character and circumstance, readers are made privy to a backstory that’s only been hinted at previously. The real treat, however, is how this melding of timeframes allows Land to incorporate beloved-if-bygone characters from the television show, such as Amos Tupper (whose voice he captures brilliantly) and PI Harry McGraw, with crossover mainstays Sheriff Mort Metzger and Dr. Seth Hazlitt, as well as peripheral figures including realtor Eve Simpson, who sold the Fletchers their house. (While Bain’s original character, Scotland Yard Inspector George Sutherland, is absent here, he did appear in last spring’s Murder In Red.)

A Time for Murder, then, is a reverential-yet-unrestrained ode to the enduring Murder, She Wrote legacy, both as a television show and literary canon. Though Land’s sensibilities (which tend to favor the former) have proved divisive among some longtime readers, there’s no denying his attempts to bridge these two worlds. This book represents his most successful effort yet and strongly reaffirms Jessica Fletcher’s status as a hero for the ages.