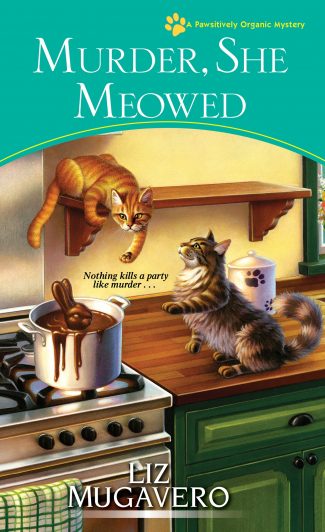 In Liz Mugavero’s Murder, She Meowed, Kristan “Stan” Connor runs Pawsitively Organic, a pet patisserie and café, and focuses on her upcoming wedding . . . until the discovery of a dead body at her bachelorette party derails her plans.

If there’s one thing bride-to-be Kristan “Stan” Connor hates, it’s tears, whether they’re her own or somebody else’s. Unfortunately for her, weddings are a natural catalyst for waterworks—and not always the happy kind. Case in point: Stan’s younger sister, Caitlyn, is pretty much in hysterics at the thought of foregoing a traditional bachelorette party in preference of something more mundane. So much so that she threatens to involve their high-strung mother, Patricia, if Stan doesn’t capitulate. Despite her better judgment, Stan reluctantly agrees to allow Caitlyn planning privileges for the party; the consequences are far worse than she could ever have imagined.

The only thing less appealing to Stan than a stripper in a cake is a dead stripper in a cake. Yet that’s exactly what she gets when she discovers the body of Perry Puck, a charismatic young delivery man, lifeless in his red satin underwear. Stan’s horror is compounded by the fact that her new pet patisserie and café, Pawsitively Organic, has become a crime scene. The resulting sense of violation coupled with her familiarity with the victim provides all the motivation she needs to seek answers to what appears to be a senseless act of violence. The ensuing investigation, which plays out against the inherent drama of last-minute wedding preparations, both strains and strengthens relationships while also revealing an underbelly of ambition, greed, and jealousy in seemingly idyllic Frog Ledge, Connecticut.

Mugavero does an admirable job of interweaving the two storylines, which results in a nice balance of mystery and machination. Both Caitlyn and Stan’s mother become unlikely accomplices in sleuthing, which has the effect of (slightly) offsetting wedding tensions; these newfound alliances, however, rankle the town’s Resident State Trooper, Jessie Pasquale—who doubles as Stan’s sister-in-law-to-be. Meanwhile, Stan and her fiancé, Jake, just want a simple ceremony to commemorate their coupling. Fortunately, they’ve got a few good friends (and a menagerie of fur babies) to keep them sane(ish). Beyond the requisite murder and madness, then, this book serves as a reminder that family isn’t simply what you’re born into but what you make.

Murder, She Meowed is a strong addition to the Pawsitively Organic series, which has evolved gracefully since its inception. While Stan’s core values haven’t changed, she’s made a new life for herself, overcoming her past without having forgotten or forsaken it. And while she has a man to share this new life with, he’s not responsible for her success nor is he intimidated by it. Rather, they are a true and equal pairing, which bodes well for future chapters, whatever they may bring.

More on the Cat Café mysteries!