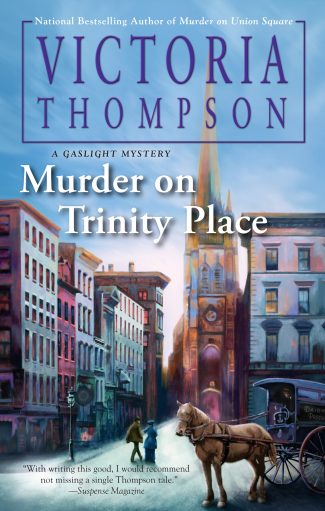 The devil’s in the details when a man is found murdered near Trinity Church in Murder on Trinity Place, the latest installment of Victoria Thompson’s Gaslight Mystery series.

Victoria Thompson highlights a different aspect of turn-of-the-century New York with each “Gaslight Mystery.” From Bowery boys to milk production, a side-benefit for faithful readers is an education into day-to-day living in New York City—and not simply insight into the the Robber Barons and their gilded spouses and children. Frank Malloy is a wealthy man (Murder in Chelsea, #15), but he hasn’t forgotten his policeman past, so he opened a detective agency. His wife Sarah comes from an affluent family but most unusually for a woman of her class, she chose to train as a nurse-midwife rather than marry. Although she no longer works as a midwife, she owns a well-run charity for girls who find themselves in a family way. She thinks of herself as hands-off, but Sarah is an attractive mixture of manipulative and caring, hands-on with people and causes that are dear to her generous heart.

Murder on Trinity Place is a marvelous mishmash of milk, mayhem, a marriage of convenience, and a turn-of-the-century mystery. The year is 1899. Frank and Sarah Malloy are enjoying a festive New Year’s Eve dinner prior to ringing in the New Year at Trinity Church in downtown Manhattan.  However, one guest, Mr. Pritchard, the hostess’s father, is not happy. His hobby horse is the controversy around the nomenclature of century’s new beginnings. Most people say a new century begins after the stroke of midnight, but not all. The evening does not end well. After Sarah and Frank arrive at Trinity Church, they spot Mr. Pritchard in the crowd, acting very oddly.

Frank tries to convince Pritchard to return home with them, but the man refuses and Frank loses him in the crowd. The next morning Sarah and Frank are horrified to learn Pritchard was murdered sometime in the night, his body left on Trinity Place, the side street near the church.

This is an unexpected outcome that needs to be unraveled. Pritchard’s family, worried, “that the circumstances of the death will reflect badly on Pritchard’s reputation,” persuade Frank to take on the case. The first clue that something is amiss is the pronounced reluctance of the police to investigate. Frank and Gino, his sole employee, get to work. Pritchard was obsessed with delivering safe, pure, pasteurized milk to New York families. Gino interrogates Harvey, Pritchard’s son and Bruno, a senior employee: who was where and when—and why—on the night Pritchard was killed? When he’s told that Harvey and Bruno were at the dairy around midnight, he fires out questions.

Gino frowned. “Here? At the dairy?”

“Sure. People need milk every day, and we deliver every day except Sunday.”

“Do you deliver the milk yourself?” Gino asked, happy to hear his voice sounded completely innocent.

“Of course not!” Because he was the owner’s son, his tone said.

“Then why did you have to be here at that time of night? And even if you did deliver it yourself, I thought you delivered milk early in the morning, not at midnight.”

Harvey opened his mouth to reply but nothing came out. He cast Bruno a frantic glance, but Bruno just shrugged. Finally, Harvey said, “They have to get the wagons loaded.”

Gino gave them a puzzled frown. “When do they start doing that?”

“In the morning?” Gino asked.

Gino asks Harvey the obvious question, since he wasn’t delivering anything, why was he at the dairy at midnight? Harvey disgustedly admits, “I lied … I was out looking for my father.” “Mother’s milk” for a detective is a web of lies. If someone wants to commit a successful crime, do it in plain sight. Frank and Gino stumble onto something very significant, the varying times Pritchard’s milk delivery trucks have been seen around town. Because who would find a milk truck suspicious?

As an added treat, Thompson shares that “fan favorite Black Jack Robinson,” who came on the scene in Murder in the Bowery, is back: Robinson is a wealthy powerful man, but his questionable past ensures that cracking the upper echelons of New York society will take more than money—he needs an insider. Sarah Malloy puts on her matchmaking hat, solving a couple of problems with one well-timed introduction.

Victoria Thompson will never run out of story ideas from the city that never sleeps, from its earliest days when it was called New Amsterdam, so readers can look forward to more “Gaslight Mysteries.” Murder on Trinity Place was very enjoyable, the core mystery was fascinating, and the side-stories added to the pleasure.