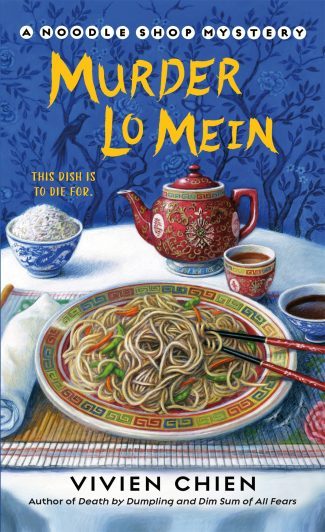 Murder Lo Mein by Vivien Chien is the third in the tasty Noodle Shop Mystery series. Everyone agrees that the food at Ho-Lee Noodle House is delicious—unless it happens to be deadly . . .

Murder Lo Mein is the third book in Vivien Chien’s delightful series featuring reluctant noodle shop manager Lana Lee, and this time, Lana is up to her nose in intrigue when Norman Pan, one of the judges of Cleveland’s Best Noodle contest, is murdered and found face down in a bowl of noodles. Winning Cleveland’s Best Noodle Contest would increase the profile of her family’s restaurant, Fairview Park, Ohio’s Ho-Lee Noodle House, and Lana is eager for the chance, even if she has to deal with some less than savory folks, like cranky food critic Norman. But after Norman’s murder, Lana can’t help but look into it, much to the chagrin of her boyfriend, Detective Adam Trudeau. Her roommate, Megan, also doesn’t plan to let Adam stop them from snooping.

I could feel Megan’s eyes boring into the back of my head as she said it.

I stood up. “I wasn’t planning on it. Adam really wants me to stay out of this one.”

After we were dismissed from the lounge, he’d pulled me aside and asked me not to interfere. There was something that bothered him about how bold the murderer had been, strangling Norman in a public area. Someone could have walked in at any time.

“We’ll be discreet. We’ve learned a lot about what to do and not to do. It’ll be a lot easier this time around.”

I snorted. “Easy? Solving a murder is easy?”

Norman, known for his scathing and vindictive reviews, was no innocent. Just about everyone seems to think the world is a better place without him, making the pool of subjects a large one.  But the contest must go on, and a replacement judge is chosen (and he happens to be really cute, resulting in lots of blushing by Lana). Unfortunately for the competitors, another murder victim is found on the eve of the next round, finally putting the kibosh on the contest, at least temporarily. Aside from the growing body count, the victims each received fortune cookies containing quotes from The Art of War, and Lana asks around Asia Village, the cluster of shops and restaurants that includes Ho-Lee Noodle House, hoping for clarification, but all that she finds is more gossip.

Check out a review of Book 1 in the series, Death by Dumpling.

Luckily, Megan is all too happy to help, and sets about digging into the backgrounds of a few key players. Meanwhile, Lana’s grandmother is in town, and it’s making her mother crazy, and Lana, of course, has to juggle her day to day responsibilities of running the restaurant. It’s a lot to handle, but the inquisitive and tenacious Lana is more than up to the job, and she does make some headway. Just as she seems to be getting closer to the truth, she gets her own fortune cookie, complete with inscrutable message. It looks like Lana is on the hit list of a ruthless killer. Can Lana solve the mystery and keep things humming along at Ho-Lee Noodle House?

Hanging out with Lana and her pals is great fun, but so much talk of food will make you hungry. It made me hungry, that’s for sure. Also, fans of the series hoping for more progress in Lana’s romance with Adam will be rewarded. Lana makes a great narrator, and Chien’s focus on Lana’s friendships, especially with women, is refreshing. You’ll want to sink your teeth into this lighthearted and clever series.

Take a visual tour of Murder Lo Mein with GIFnotes.