Book Review: Murder in the Corn Maze by G.A. McKevett 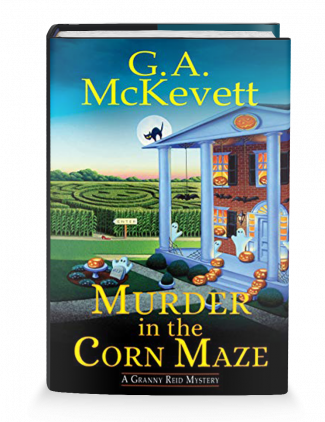 Murder in the Corn Maze

In G.A. McKevett’s Murder in the Corn Maze the roots of the Moonlight Magnolia Detective Agency reach back to the 1980s in the little town of McGill, Georgia—where Stella Reid and her seven grandkids enjoy some spooky Halloween fun and stumble into murder . . .

G.A. McKevett (a.k.a. Sonja Massie) has been delighting mystery fans for more than two decades with her cozy series featuring PI Savannah Reid and fellow members of the Moonlight Magnolia Detective Agency. Last year, reader favorite Stella “Granny” Reid stepped into the spotlight with Murder in Her Stocking—the first book in a spinoff series set in McGill, Georgia that revisits Stella in the 1980s, as she assumes caretaking responsibilities for her young grandchildren. Their harrowing saga continues in Murder in the Corn Maze.

The story opens on Halloween, as Stella wrangles her energetic and perpetually squabbling grandchildren for the town’s annual Halloween parade/costume contest. While money is tight—there are seven kiddos, after all—creativity and spirit aren’t, and it’s with a sense of optimism that they head out into the autumn night. Stella’s bighearted, lifelong friend, Elsie Dingle, even managed to get them tickets to Judge Patterson’s famed corn maze. While the younger children demur, Stella, Savannah and Waycross brave the festivities—but their fun is interrupted when Savannah stumbles over skeletal remains that have been partially unearthed.

Even more upsetting than the discovery itself is the fact that Stella recognizes the person’s clothing and hair. The victim, Becky Dingle (Elsie’s mother)—who had been like a second mother to Stella, whose own mom died at the hands of an unidentified assailant—was thought to have run off decades ago to escape an abusive marriage. Further, the manner of her death leads Stella to believe that there may be a serial killer on the loose—somebody who has walked among the townsfolk for generations undetected. Soon, Sheriff Manny Gilford—a widower who has been sweet on Stella since their childhood—is on the case. But the more he and Stella (and intrepid young Savannah) poke around in the past, the more they risk waking a devil.

While the premise itself may sound like standard genre fare—murder and mayhem set against the backdrop of a holiday—the subsequent story transcends such simple categorization by virtue of its uncommon depth. The sanctity of friendship and faith, even when threatened (or perhaps especially when threatened), largely offsets the books darker themes. And while uncovering the truth necessitates confronting a painful past that will send shock waves through the present, it’s not without promise for the future. Beyond questions of whodunit and why, McKevett explores both the heartaches and hopes that define our human condition with the Southern sass and savvy that have come to typify her work. Indeed, Stella’s challenge to her grandchildren is one we’d all do well to adopt:

We try our best to treat others with kindness and respect. Not because of who they are but because it’s the right thing to do, and we want to look in the mirror and see a person who chooses to do the right thing …

Murder in the Corn Maze is both a trick and a treat. The trick is that it uses familiarity to mask its freshness; the treat is that this gambit works on every level—both as a singular story and a series installment. Be forewarned: While this book may send a shiver down your spine, it’s also guaranteed to warm your heart.