Book Review: Murder in an Irish Pub by Carlene O’Connor 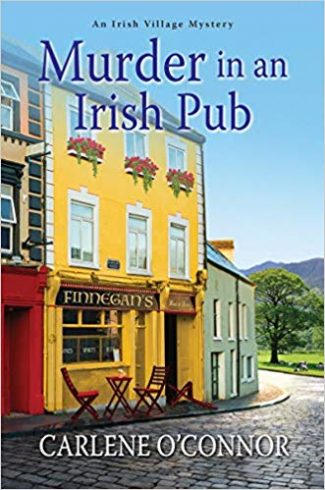 Murder in an Irish Pub

In Carlene O’Connor’s Murder in an Irish Pub, the cozy village of Kilbane seems like the perfect place for a poker tournament, until the star player is found hanging in the local pub’s broom closet.

Siobhan O’Sullivan is a Garda in the small village of Kilbane. She’s still pretty new to the job, but she’s a natural. When a poker tournament comes to town, the village welcomes the tourists and players with open arms. All is well until the tournament is called off when the top player is found hanging inside a broom closet at Rory Mack’s pub. Eamon Foley, also known as the Octopus, is the dead man. At first glance it seems as if he has committed suicide, but Siobhan starts realizing that it doesn’t add up. Eamon’s very pregnant widow, along with the other tournament players, and a host of others, all end up as suspects as Siobhan works hard to solve the murder.

This is my first book in the Irish Village Mystery series. I really enjoyed Siobhan’s character as a sure and strong Garda, gifted by her natural inclinations, yet also the softer side she almost lets peek through with her love and boss, Macdara Flannery. I liked their scenes together as much as I did the mystery. The two of them are believable, not over the top, and their forbidden romance adds a little spice to the mix. Also, Macdara respects Siobhan and listens to her, even though he is technically her boss.  Siobhan is part of a large and loving family. She is the older sibling, so they all look to her as a replacement for their parents who have passed away. She is natural in this role and her maternal instincts are strong. She’s a protector and doesn’t have a problem enforcing rules on her younger siblings, but not so that they won’t respect her.

Foley was found with a potential suicide note on him. It read simply, “Can’t beat the Dead Man’s Hand.” This is a cryptic message that plays into the mystery with its explanation.

“Do you know the legend of the Dead Man’s Hand?”

Another favorite character of mine was a little explored one—Layla the pigeon. Greg Cunningham cared for a number of local pigeons, but Layla was one of his favorites. Layla begins to return Greg notes from someone that discusses parts of the crime. When one comes back, typed on an old typewriter, Siobhan gets involved. I loved that the pigeon became a part of how Siobhan eventually solves the crime.

He handed Siobhan the note. It was typewritten: THE OCTOPUS HUNG HIMSELF IN FINNEGAN’S.

Finnegan’s. The previous name of the pub. Rory Mack hated when folks still referred to it as Finnegan’s. Whoever sent this note, one thing was for sure, he or she was a local. Siobhan handed it to Macdara. “Your pigeon brought you this note?”

She grimaced. “Layla brought you this note?”

Greg appeared to be growing tired of the humans. “I said so, didn’t I?”

Greg kissed the pigeon’s head and placed her back in the cubbyhole. She cooed. Siobhan tried not to melt. “Could be from anyone. All the locals know me pigeons. You wouldn’t believe the t’ings people send.” He walked over to another cubbyhole and pulled out a basket filled with tiny little notes.

Murder in an Irish Pub was a delightful read that put me right into the atmosphere and locale. It should also be noted that I was able to pick up this book without having read the prior installments with ease. I didn’t feel like I had missed out on a lot of important information, and author Carlene O’Connor writes it with fluidity so the reader doesn’t have to start at the beginning of the series. That said, I would like to go back and read the other books to see how Siobhan has evolved.