Book Review: Mrs. Jeffries and the Alms of the Angel by Emily Brightwell 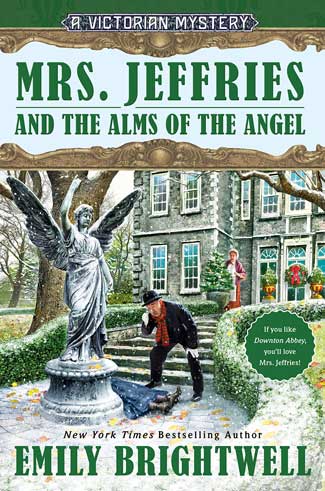 Mrs. Jeffries and the Alms of the Angel

Mrs. Jeffries and the Alms of the Angel by Emily Brightwell is the 38th Victorian Mystery, where a wealthy widow is murdered and Mrs. Jeffries investigates what happens when money can’t buy your life.

Mrs. Jeffries and the Alms of the Angel by Emily Brightwell is a cozy mystery perfect for Christmas. There’s something about the season that makes one want to curl up with a tale about dastardly figures set in the Victorian Period—perhaps because the classic A Christmas Carol, despite its finale of holiday cheer and wrongs righted, has primed us to feel oddly comfortable with a holiday mystery or two, complete with the looming specter of Death! As one of the characters in Brightwell’s novel eagerly points out, “They [grisly murders] always make the holidays a bit more exciting.”

Mrs. Jeffries and the Alms of the Angel is the 38th book in the Mrs. Jeffries series, but it is a good standalone novel and does not require any knowledge of the previous 37 books. The inciting incident is the murder of wealthy philanthropist Margaret Starling, and because the crime has taken place outside of Inspector Witherspoon’s jurisdiction, he serves more as an advisor than the primary investigator. This means Mrs. Jeffries and her band of house servants must be even craftier in their sleuthing so as not to draw the attention of Inspector Nigel Nivens, who feels some sense of rivalry towards Witherspoon.

Readers and lovers of the Victorian Period will enjoy the upstairs/downstairs aspect of the novel. Mrs. Jeffries, Inspector Witherspoon’s housekeeper, keeps house in the sense that she manages his home, but she also sees to maintaining order in other regards too: she enlists the help of the staff and governs them in helping solve the crime. This, of course, revises the standard “separate spheres” ideology many of us learned about in school when studying Victorian history and culture. Victorian men did manly things outside the home: business, trade, and the like, for example. Meanwhile, women were supposed to be the angels of the house, the homemakers responsible for bringing up children. Mrs. Jeffries breaks these taboos and then some, and owing to her efforts and those of her counterparts, she does much of the legwork of the crime solving, unbeknownst to Inspector Witherspoon, of course.

Surprisingly, this cozy mystery packs some feminist punch. Even the deceased Margaret Starling breaks from 19th-century gender expectations. Unfortunately, this may have helped inspire the reasons for her murder. She asked questions and pushed for equal representation on the philanthropic society of which she is a part. “They’re only supposed to advise the board about the specific needs in the community and to help with the day-to-day functioning of the society,” one of the society’s male members says of the women. “They’re responsible for the housekeeping functions: sorting the donated clothes and parceling out the food […] None of them are supposed to be questioning the men on the board.”

Although set in the 1890s, this mystery feels relevant to our own times. Readers will enjoy solving the mystery along with Mrs. Jeffries and seeing justice prevail.

Michelle Mastro works as a writer and editor. She loves all things horror, suspense, thriller, and mystery. Her favorite detective of all time is Miss Marple.