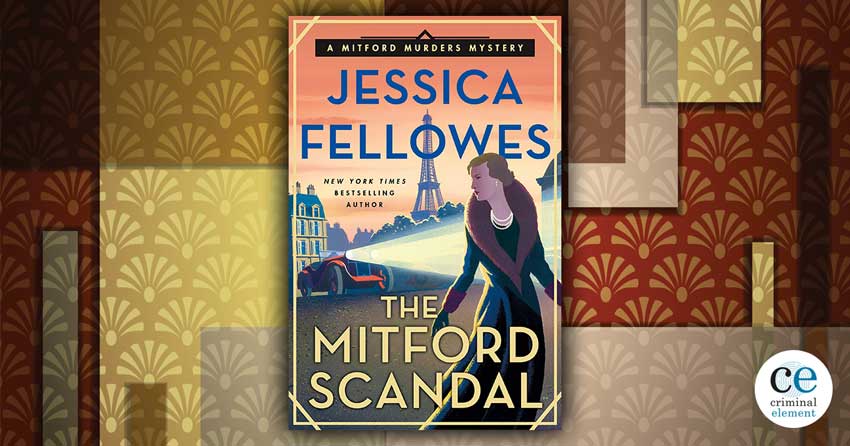 The Mitford Scandal by Jessica Fellowes is the third book in the Mitford Murders series, where lady’s maid Louisa Cannon accompanies Diana Mitford into a turbulent late-1920s Europe.

June 1928: Louisa Cannon, former nursery maid to the colorful Mitford family, is realizing the life of an independent career girl in London is more difficult than she anticipated. Since striking out on her own, she’s struggled to make her way. Forced into temporary work as a kitchen maid at high-society soirees, she’s serving at the Guinness family’s Grosvenor Place mansion when tragedy strikes.

Somehow, over the chatter and the music, Louisa was sure she heard a creak from above, followed by a cry. She was puzzled to see shadows moving across the glass. Were those people on the glass? It couldn’t be nearly strong enough to hold anyone? Louisa looked frantically about her, not knowing what she was hoping to see—something to catch them? Should she shout? But she didn’t want to cause a scene, it might be someone fixing something and it could be terribly embarrassing if—

Without realizing, Louisa had been moving as she was looking up, and she felt someone grip her arm. It was Mr. Meyer. ‘Watch out,’ he said. He looked up, following her eyeline, and gave a gasp. ‘What’s up there?’

Before either of them could warn the others there was a crash, then a fast-moving, horrible sound as shards scattered everywhere, hands flew to faces and men threw their arms around the bare shoulders of the women, before the most sickening and terrible sound of all—a body hitting the floor.

Up above them another girl clung to the chandelier, blood pouring down her china-white face, her eyes squeezed tightly shut, her mouth a silent black hole.

January 1929: Back in the Mitfords’ employ as a lady’s maid, Louisa accompanies the young but glamorous Diana Mitford—now Diana Guinness—on her fabulous Parisian honeymoon. The experience proves bittersweet as the exciting bohemian air of the city is tainted by the sudden death of one of Diana’s hard-partying friends.

Shaun Mulloney appears to have succumbed to an allergic reaction, but the events of the night don’t sit well with Louisa. Could it have actually been murder? And could there be a connection to the unfortunate accident at the Guinness’s party months before?

Meanwhile, DS Guy Sullivan is searching for a young maid who disappeared from the same party—and wrestling with affairs of the heart. It’s been months since he and Louisa fell out of touch, but he hasn’t stopped thinking of her. Is he wasting his time? Should he move on with someone new and finally start the family he’s long delayed?

The third in Jessica Fellowes’s Mitford Murders series covers a four-year span (1928–1932) and certainly doesn’t lack for excitement, intrigue, or shocking events as the characters (both fictional and historical) weather personal upheavals and a quickly changing world. With richly vivid detail, Fellowes pulls us back into one of the most turbulent periods in Europe as class divides begin to shift and blur, as the entire institution of the servant class starts to dissolve, as women get the vote and strike out from narrow domestic spheres:

Everything was changing, in London as well as Paris. Everywhere she looked there were well-dressed women striding around with purpose. In the newspapers there were constant stories of women who had earned impressive degrees at university, who were making great scientific discoveries, exploring new territories and flying aeroplanes. They beamed out from the pages, with broad, confident smiles and short haircuts, wearing wide-legged trousers. ‘Look at us,’ they seemed to say, ‘we can do anything any man can do!’

It should have inspired her but instead it made her feel weaker: all this opportunity before her and what had she done? Worked as if she lived in the Victorian age, as a servant and seamstress. She could have swapped lives with her grandmother and no one would know the difference.

In this narrow space between World Wars, inevitable darkness looms ominously on the near horizon. Diana and Louisa first hear of the Nazi Party from elder brother Tom Mitford. Fascism grows in Italy and even in the heart of London. Prohibition is in full swing across the pond, and the American Depression is steadily spreading into England. Yet all the while, Diana and her friends continue to dance and laugh and eat expensive oysters.

Fellowes devotes a significant portion of the story to the historical detail and real-life-yet-larger-than-life characters—such as the Mitfords, Evelyn Waugh, and Dora Carrington—but there’s still plenty of room left for a thoroughly serpentine mystery.

For all its glamorous trappings, Scandal is a surprisingly morbid tale with a higher-than-average body count. Accidents, suicides, illnesses, and murder (?) serve to heighten the turbulence of the time, and Fellowes fits the seemingly disjointed events together into a most-satisfying conclusion that wraps up in an unexpected (and thrilling!) way.

And because Fellowes is nothing if not an overachiever, Scandal also boasts a plethora of sincerely emotional, philosophical moments for Louisa. Amidst all of the parties and affairs and death, trapped in the chasm between the have-nots and the have-everythings, our determined heroine struggles with feelings of inadequacy, thwarted ambitions, chancy friendships, and love that may ultimately prove star-crossed. Through it all, she remains a girl we stalwartly root for.

‘Louisa, why are you so determined to do this?’ Luke was watching her. But she couldn’t bring herself to admit the truth.

She wanted Guy’s admiration. She wanted him and the rest of his department to know that she had helped them to catch a murderer. She wanted to prove there was more to her than someone who fetched and carried for a rich, spoilt woman who was nearly ten years younger than she was.

‘It’s the right thing to do, that’s why,’ she replied. ‘Show me where the telephone is, please.’

The Mitford Scandal is rather like a sumptuous five-course meal: there’s something in its pages to suit nearly every taste. From a solidly researched factual base, Fellowes has constructed a multi-layered narrative that’s equal parts mystery, romance, and a window into how the other half lives. With the most minor of adjustments, she’s linked fact to fiction to produce a story both exciting and practically seamless—the mark of a true master.

With World War II and even more dramatic developments in the Mitfords’ lives right around the corner, we should all be impatient to see what Fellowes and Louisa do next.

Check out a video of Jessica Fellowes discussing the Mitford Murders Mystery series!