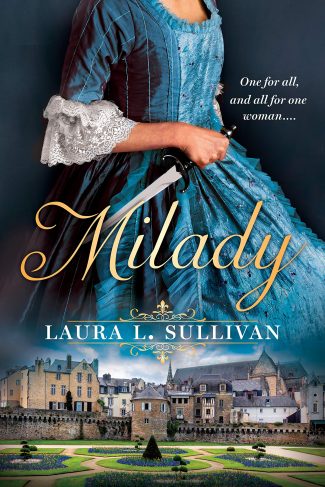 From the glittering ballrooms of 17th Century England to the dangerous intrigues of the French court, in her new novel Milady, Laura L. Sullivan brings an unlikely heroine to the page, turning on its head everything we’ve been told about The Three Musketeers and their ultimate rival.

In that moment, I remembered so clearly what Maman had told me almost a year ago. In the tide of great affairs, it is not the many who make the crucial choices, but the individual. Mobs do not decide the fate of the world, not even armies. It is always one man – or one woman – often unknown to history, working in secret, dedicated to a greater good, who shifts the tides.

“If you choose the life of an agent, a spy, the outside world will never know you. Not truly. You will appear to be one thing, and actually be something else entirely. You may seem a lovely courtesan, a charming widow. Or your name may be blackened beyond repair. You may be called wanton, whore, witch. But none of that will be the real you. …If you choose the life of an agent, you will do great things. But they will be known by very few. You must be content with having no glory for your work. The things you do may appear cruel, selfish, heartless. But you, and those who truly matter, will know you serve a higher cause.”

Everyone knows her story.

As Cardinal Richelieu’s favorite weapon, Milady de Winter – assassin, spy, seductress – is the most dangerous woman in all of England and France. The arch nemesis of d’Artagnan and the Three Musketeers. A black-hearted demon hiding behind a beautiful face.

But every story has two sides. And when the villain is a woman and a man holds the pen, the one everyone knows may not be true.

Here, in this house, are all the things those who think they know Milady would say I don’t deserve. A prison cell, the torments of hell are more fitting for one such as me, many believe. My name – my title, rather, for no one knows who I truly am, and even in Paris I have many guises – is whispered in the dark as furtively as some speak of the devil, as if to breathe my name would conjure me in the flesh. And oh, what flesh! My beauty is part of my legend.

But Milady wasn’t always the Cardinal’s creature. Before she became infamous, she was Clarice, the noble daughter of a clever French mother and a scheming English father.

Raised in a rural castle, taught the ways of physicking and herbs and how to ride by her mother, as a young woman she was claimed by her father, who made sure she was taught the intricacies of seduction and intrigue to better suit his purposes in the English court of the Stuarts.

She suffered numerous trials and heartbreaks long before she ever met a Musketeer. Betrayals, indignities, and violence struck often. But through it all she kept her wits and her strength, doing what was necessary to survive.

It is only in storybooks that someone comes to the rescue, I decided in that moment. No one had ever come for me, save Maman, too late, and never again. As I was held tight by a dozen clutching priestly hands, I realized that I would have to be my own hero.

I would have to save myself.

In Milady, we see everything through her eyes. The eyes of a clever, feeling, powerful woman. The brutal actions and character flaws of the Musketeers are laid bare, providing a fresh perspective of the events in the classic adventure story.

Yes, Milady was a spy and an assassin. Yes, she killed and beguiled on the orders of the Cardinal. But did that truly make her evil, demonic, as Dumas implied? Or was her greatest crime her confidence and capability, the fact that she acted as decisively and passionately as a man?

More than anything, Milady gives the titular character her agency back. Like thousands of clever women before and after her, Milady struggled to overcome not just personal difficulties but also the patriarchal, misogynistic society that would have seen her subdued, cowed, and destroyed for daring to challenge the status quo.

Here, at last, she’s allowed to call the shots and tell the story.

Milady needed a nemesis, and the Cardinal needed to believe I feared for my life. No average man could hope to best me – the Cardinal would never believe it. So Athos and his Musketeers had to be built into veritable demigods, noble heroes of righteousness.

A trio of Musketeers and a half-grown Gascon defeat Milady de Winter? Who would credit it? But now, thanks to my most subtle machinations, history will record the tale those men shall tell. In taverns throughout the land, they will repeat the story of my treachery, and my defeat. The innocent Connie killed through spite and jealousy, the noblest lords laid low, the monarchy itself manipulated.

And fighting that embodiment of feminine evil, the heroes whose names will survive the centuries. No one will know the true tale of Milady de Winter, and when she dies, only her most heinous exploits will be remembered.

Exactly as I want it.

Milady is gorgeously written; our heroine’s voice is a confident and eloquent one, unflinching as it recounts horrible pain and unapologetic as it calls out the deadly double standards she faces. (And be forewarned: there’s plenty in here to trigger, from attempted rape to torture to kidnapping and unjust imprisonment.)

Sullivan clearly put significant effort into the historical details, language, and tone. When dialogue and scenes from Dumas’ novel are slipped into the narrative, it all feels seamless.

And, like The Three Musketeers, Milady lives a life of high adventure and twisty plotting. This novel is like a carefully layered and intoxicating rum cake, where more and more secrets and machinations are revealed as the story sways between Milady’s present and past.

Seeing how everything could have been planned in advance by the infamous spy is half the fun for those already familiar with the Musketeers’ story; the other half is watching such a colorful woman come into her own, overcoming great obstacles to create her own powerful, devoted triumvirate.

“One for all,” it turns out, isn’t just the Musketeers’ credo. And it’s so satisfying watching a woman be the smartest in the room, out-plotting the most powerful men of her age as she reclaims her own story – and protects her family at the same time.

Milady is a historical adventure, a high romance, a twisty thriller, and a feminist reclamation. Like its heroine, it wears many masks and accomplishes many goals. For all of those craving sharp characters and grandiose action – and especially for those longing to see more powerful heroines – this is a palpable hit.