May 19, 2021
In this reissue of Warren C. Easley's critically-acclaimed debut, Lawyer Cal Claxton must face the police, the media, a right-wing shock jock, a Russian cage fighter, and some of Portland's most powerful citizens in order to prove his client's innocence. 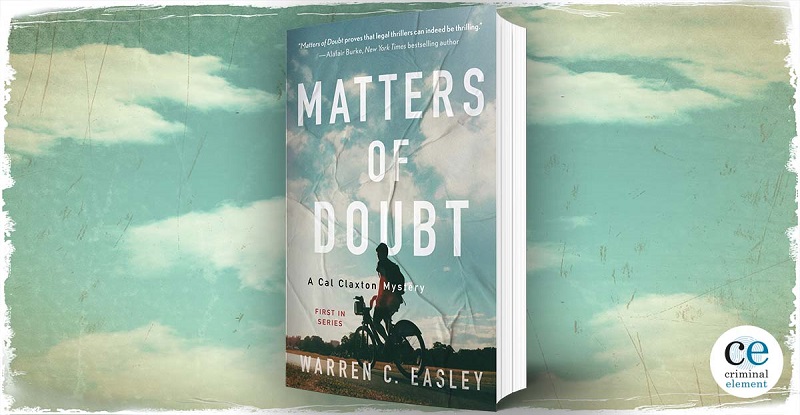 If you haven’t discovered Warren C. Easley’s venerable mysteries featuring attorney and fly-fishing enthusiast Calvin Claxton, now’s the time. Easley—who had careers as a research scientist and business executive before turning to fiction—is being thrust back into the literary spotlight with Poisoned Pen Press’s reissue of his critically-acclaimed 2013 debut, Matters of Doubt, which precedes a new series entry due out later this year.

As the story opens, Cal—a former prosecutor from Los Angeles who now makes his home in Oregon’s wine country with his dog, Archie—is struggling to make ends meet in private practice. When a young street artist named Danny (“Picasso”) Baxter unexpectedly turns up on his doorstep with a file pertaining to his mother’s unsolved murder, Cal reluctantly turns him away (though not before offering to recommend a colleague). No stranger to tragedy himself—his wife committed suicide, and he lives with regret over having missed the warning signs of depression—Cal soon reconsiders, following the boy’s bike tracks from his small vineyard town of Dundee to the large city of Portland.

While Picasso—who works at a community health center and resides at a government-sponsored enclave for the homeless called Dignity Village—is hesitant to give Cal a second chance, his desire to see justice done supersedes his pride and he reluctantly accepts the offer of help. His mother’s case is a confounding one: investigative reporter Nicole Baxter disappeared eight years ago and her body—marred by a gunshot wound to the head—only recently washed up. With scant evidence to go on, the case has gone cold but Picasso is convinced that her mother’s then-boyfriend, Mitchell Conyers (who he publicly scuffled with at the memorial service), was the perpetrator. When Cal later follows Picasso to Conyers’s home and finds the young man covered in the newly dead man’s blood, he wants to believe it’s a set-up. The authorities, however, are convinced they’ve got their man and need only collect sufficient evidence to make an arrest.

With tensions (and costs) rapidly escalating, Cal—who is himself viewed by law enforcement through a lens that ranges from skepticism to suspicion—is tempted to cut his losses. But Picasso needs an advocate, and Cal’s conscience won’t allow him to walk away. After all, Cal does know a thing or two about how the system is stacked against the underdog. Cal is ably assisted in his investigation by a cast of colorful characters, including endearing Cuban business associate Hernando (“Nando”) Mendoza and Dr. Anna Eriksen, who has dedicated her life to serving the at-risk. Despite their passionate efforts to exonerate him, public sentiment—propagated by a popular radio personality—is overwhelmingly against the tatted, rough-around-the-edges Picasso. A series of violent encounters indicate that Cal’s inquiries have piqued somebody’s interest, though whose—and how exactly they relate to Nicole Baxter’s death—remain to be seen.

The narrative, which is punctuated by an escalating body count and an increasing sense of desperation, unfolds through Cal’s first-person point of view. This creates an immediate, indelible bond with the reader, given Cal’s self-awareness and sympathetic backstory (which is presumably fleshed out in subsequent books). Picasso’s plight, which is representative of so many young people who have been marginalized and maligned, sustains Cal as he vacillates between doubts about his client’s innocence (based on evidence) and the devotion to the cause (based on instinct). The conclusion is entirely satisfying in its own right, while the overall plot serves as a reminder that crime stories are, or can be, as much about the mysteries of the human condition as they are about questions of whodunit and why.

Matters of Doubt remains a distinguished debut, and this reissue should capture the attention of new readers while rekindling the interest of longtime fans. Not only has Warren C. Easley created an infinitely likable protagonist in Cal Claxton (and his equally memorable friends and associates) and a palpable sense of place with his atmospheric rendering of Oregon, but his skillful, sensitive handling of timely social issues elevates the novel beyond escapist fiction. Anticipation, then, should be high for the series’ eighth entry, No Witness, which is slated for publication in August—and there’s an impressive backlist to (re)visit in the meantime.