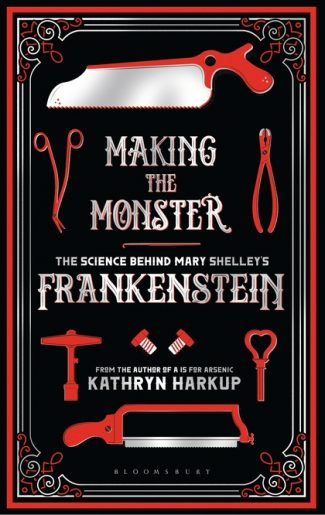 Making the Monster: The Science Behind Mary Shelley's Frankenstein

In Making the Monster, bestselling author and chemist Kathryn Harkup does a deep dive into Mary Shelley’s life and the historical events and scientific theories that influenced her greatest work.

For two hundred years, it’s been one of the most evocative, potent names in literature. It instantly conjures up images of sparking electrical instruments, laboratories and graveyards, mad scientists, and huge hands covered in stitches. It’s become a shorthand for science, medicine, or technology gone wrong. It’s the cautionary tale of what happens when man dares to play God, and was the progenitor of the entire science-fiction genre… Frankenstein.

And we can thank OG Goth Girl, Mary Shelley, for all of it.

How did a teenager create a work of fiction that has enthralled, inspired, and terrified for two centuries? Like the infamous monster of her creation, stitched together from an assortment of fragments, Mary’s novel took a collection of oddments from her own life and weaved them together to make a work much greater than the sum of its parts.

Mary Shelley was alive at a time of new opportunities for women in terms of education. Despite being born into a scandalous family set-up on a very restricted income, Mary had an enviable, though unconventional, childhood… filled with books and spent in the company of writers, artists, scientists, and philosophers. It was no surprise, and was perhaps even expected, that Mary would become a writer.

Whether you’ve read the novel or merely watched one of the more than 400 movies, TV shows, or plays inspired by it, you know most of the story. The scientist who goes too far, robs graves, and stitches disparate body parts together into a monstrous man that returns to life. How the scientist’s refusal to take responsibility for his creation leads to catastrophe for everyone around him, as his quest for scientific knowledge ends with murder, horror, and terrible suffering.

But do you know just how Mary Shelley came to craft such a powerful, immortal tale that’s equal parts science-fiction and Gothic horror?

Kathryn Harkup does. A biography, historical journey, and scientific treatise all rolled into one, Making the Monster starts long before Mary Shelley is even born, setting the stage by exploring many of the advancements, experiments, and discoveries in the era of Enlightenment that would later come to bear on Mary’s work.

We’re given brief biographies of her parents—the great philosopher/author William Godwin and his wife and intellectual equal Mary Wollstonecraft, a foremother of feminism—as well as her husband Percy Bysshe Shelley.

And, of course, time is spent on the infamous gathering at Villa Diodati in the “Year Without Summer”:

Byron’s challenge to write a ghost story was taken up enthusiastically by everyone at Villa Diodati. But of the five stories that were started, only two were ever completed, and to everyone’s surprise, it was not the established writers, Byron and Shelley, who made the most lasting contributions. It may not have produced much in quantity, but a simple, light-hearted challenge to alleviate the boredom of a miserable summer produced two of the most recognizable figures in Gothic and horror fiction: Frankenstein’s monster and the vampire.

However, the real meat of Harkup’s book is devoted to the factual, often surprising, science that went into Mary’s novel. From natural philosophy to galvanism to the packed lectures on anatomy made possible by bodysnatchers… From early attempts at transplants to the stages of decomposition and real-life physical anomalies like acromegaly (which can manifest as gigantism or misshapen facial features), Harkup charts the myriad oddities and marvels that Mary stitched together to breathe life into Frankenstein.

Woven throughout is commentary on the numerous obstacles the young author had to overcome, as well as the crushing heartaches and losses she faced that certainly contributed to the novel’s tragic tone. Making the Monster does a fine job of humanizing a figure who has assumed a mythic quality in both pop culture and the literary world; Harkup never makes light of Mary’s prodigious accomplishment, but she also reminds us that she was once a feeling, breathing woman.

(Harkup also debunks many of the apocryphal anecdotes that can’t be verified by primary sources or definitively happened after Frankenstein’s publication. Clearly, this is an author who has done her homework very carefully.)

Accompanying Harkup’s eloquent prose are classic illustrations and artwork, a downright impressive timeline listing important historical events in relation to Mary’s life, and a thorough bibliography for further reading. Making the Monster is a must-read for any diehard Frankenstein or Mary Shelley fan, as well as anyone passionate about picking apart the inspirations of great stories. If you thought Mary was extraordinary before, you’ll appreciate her even more after reading this. It’s a fitting tribute to the clever teenager who used her morbid, fertile imagination to give birth to one of the world’s greatest monsters.