July 25, 2022
David Ellis' Look Closer is a clever and fast-paced novel of greed, revenge, obsession—and quite possibly the perfect murder. Read on for Doreen Sheridan's review! 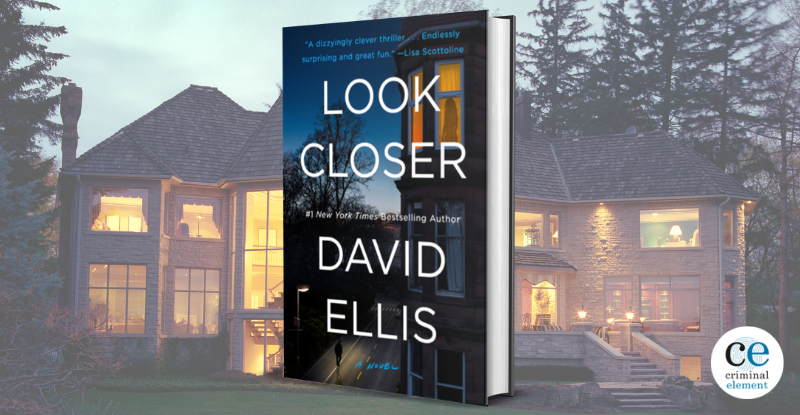 I regard any book that compares itself to Gillian Flynn’s masterpiece, Gone Girl, with a healthy dose of skepticism, having been disappointed one too many times by pale imitations since the publication of that excellent novel. So I went into reading Look Closer, the latest book to garner such comparisons, without the highest of expectations… and was then completely blown away by how smart, sneaky and surprisingly heartfelt this novel is!

The book opens with law professor Simon Dobias stealthily exiting the house of his once-paramour Lauren Betancourt. She is dead and he… well, it doesn’t look like he’s up to any good. He wonders whether things would have gone differently had fate not put them on the same city street just a few short months ago, when the first woman he ever loved walked back into his life, exploding his good-enough existence once more with her volatile presence:

It’s all coming back, washing over me again. It’s growing like a tumor inside me, poison flowing through my veins. I should stop right now. I should forget I saw you. I’ve put you behind me. You need to stay right where you’ve been, in my rearview mirror. I’m better now. I know I’m better. Vicky says I’m better. I can’t go back there. Everything’s fine.

Vicki is his partner, the woman he’s longed for these last few years but who feels too much like a roommate now for him to be able to claim that they’re happily married. They originally met at a support group dedicated to those who had lost a loved one to suicide. He helped her get off of drugs, and she helped him deal with the emotions he didn’t like to talk about with anyone else. Besotted, he asked her to marry him. She turned him down the first time, even moving away from Chicago in order to reclaim a life free of addictions and grief, until circumstances finally brought them back together again.

But Vicki knows, perhaps has always known, that what they have is tenuous at best, as she explains in her own viewpoint chapters:

The bigger problem, why we will never work, is children. Simon wants them. He wants it all, marriage and kids, a nuclear family. The family I had growing up was nuclear, all right, but not in a good way. I’m not doing it.

Simon says I’m just scared, like any future parent would be. Yes, I’m scared. I’m scared I’ll wreck them. I’m scared they’ll turn out like me.

As the novel unfolds, Simon and Vicki appear to be working at cross-purposes, with Simon embarking on an obsessive affair with the woman he can’t forget, while Vicki sets her sights on the trust fund that she’ll only be able to access after the tenth anniversary of their marriage. To that end, she looks for a less than scrupulous money manager and finds one in Christian Newsom, who’s working his own angles when it comes to rich women acquiring large windfalls from their soon-to-be ex-spouses.

The twists in this intricately laid out plot are dazzling, as Simon and Vicki’s plans come to fruition, leading to often tense confrontations when one or the other comes too close to exposure. It’s hard to know who to root for in this cat-and-mouse game, as we learn more of our protagonists’ motivations. I was actually deathly afraid that David Ellis would go for one betrayal too many in the end, breaking my reader’s heart. As it was, he wrapped up the book perfectly. Whereas Gone Girl was a perfect, poisonous portrait of modern marriage, Look Closer is a life-affirming, if no less morally gray and dark, testament to the strength of kinship in the face of the greatest pain. Highly recommended.