Book Review: A Long Way Down by Randall Silvis 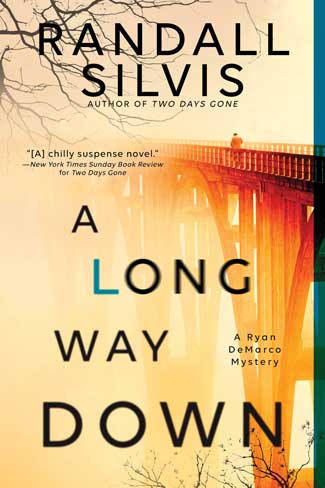 A Long Way Down

A Long Way Down by Randall Silvis is the third book in the Ryan DeMarco mystery series.

I discovered Randall Silvis fairly recently and have read three of his books in a short time. He has a unique way of writing crime fiction, so I didn’t hesitate a second to read his new novel, A Long Way Down.

This is the third book in the DeMarco series, and it might be good to first read the previous two, Two Days Gone and Walking The Bones, especially as there are several references to both of them at the beginning. Plus, you can better understand the dynamic between the characters, which is an essential element in Silvis’s books—maybe even more in this one than in the others.

Ryan DeMarco goes back to his native Pennsylvania to visit his wife who has just tried to commit suicide. Once there, he bumps into a sheriff friend of his who asks for Ryan and his new girlfriend Jayme’s help in a series of murders that seem to be connected to murders that happened when DeMarco was in high school.

The book comprises three parts, each introduced by a short passage from books by DeMarco’s friend Tom, the author killed in the first book in the series. Then, it features a passage of a diary in italics, signed Erebus. You quickly realize the author of these passages is a very sick person, which cannot bode well for our duo of investigators.

The book is long (464 pages) and slow at the plot level. Lovers of crime fiction are well-rewarded however, as the novel definitely has its share of gruesome, dark, heavy, suspenseful, and action-packed passages. And unexpected twists! But Randall Silvis offers so much more.

DeMarco suffers from PTSD and tries to reconstruct his life after much personal and family drama. Jayme has experienced her own challenges, but together, they strive to turn the page and start anew. Having to go back to where DeMarco grew up doesn’t make it easy. And who knows what type of danger they are going to have to face together? All along, you constantly feel they have a Sword of Damocles hanging over their heads.

The author uses strong and lyrical imagery to describe the characters, their relationships, and their psyche but also cities, the landscape, and even the weather.

The morning was no longer soft, the air no longer sweet. DeMarco looked up at the sky as if it had insulted him. It was going to be one of those gray flannel days that keep promising rain, with black squall lines in the distance that never get any closer, and flaming tempers that threatened to combust everything in the vicinity, and muscles that feel like pasta cooked five minutes too long. The kind when the air tastes and smells and lays in your lungs like your high school gym socks after a week of hard workouts. By noon women’s makeup will be running and their hair hanging limp. Everybody will unbutton their shirts as far down as they dare, and then a button or two farther. People who work outside won’t be able to see for the sweat in their eyes, and will accidentally massacre their hedges or run their equipment over a dog sleeping in a patch of shade, and will be too exhausted to care. Everybody will avoid conversation and hardly anybody will have the energy to raise their eyes more than four feet off the ground.

And there are nice passages on writing as well, as Tom’s wife asks DeMarco to go over notes by her deceased husband to possibly prepare a new book. This added a nice, positive dimension, like the gestation of something new to come—one that may see the light in the next book in the series.

How can a life companion help you face your past and rebuild yourself? Randall Silvis offers some powerful insight while his characters experience life at its most dangerous in the most gruesome of cases.