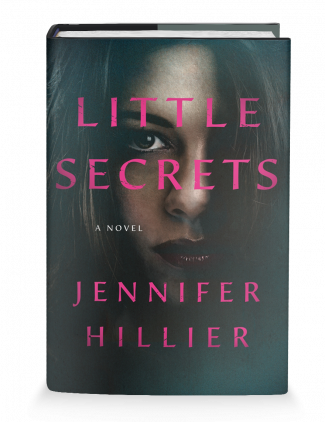 All it takes to unravel a life is one little secret…

In Jennifer Hillier’s riveting new thriller, a woman desperately tries to save her marriage in the face of overwhelming tragedy.

Jennifer Hillier is one of the best in the business. The elements that make her one of the best are clear and present in every one of her novels. She creates narratives packed with beautiful writing about horrible things, she has an understanding of human nature and psychology that borders on academic, and she understands that in fiction, much as in real life, small things can turn into gigantic problems. Her latest novel, Little Secrets, is a superbly written thriller in which these elements coalesce into a taut, heartbreaking narrative that possesses an incredibly tense atmosphere and enough anger to lead to murder.

Marin’s life was enviable. She was a successful businesswoman who ran a well-known chain of salons, she worked on the hair of pop superstars, had married her handsome, caring, and very rich college sweetheart, and she had a lovely son named Sebastian. Then her son was kidnapped, and the fairytale life came crashing down. A year after the kidnapping, she wakes up regularly contemplating suicide, her husband Derek is distant, and the FBI search for her son has yielded no results. Marin understands that the case is growing cold, so she hires a P.I. to keep looking, and to look in places where the FBI didn’t look. Unfortunately, instead of her son, the investigator finds that Derek is cheating on Marin with a 24-year-old art grad student with pink hair who works as a barista at a local coffee joint. If losing her son shattered her life and took the thing she loved most from her, the infidelity is a monster that steps on the last shreds of her marriage. Angry and hurt, Marin decides to solve the problem by getting rid of her husband’s lover, but that’s not an easy, or cheap task and a lot of things will happen that will alter Marin’s perspective.

Little Secrets has a crushing start. Hillier is a masterful storyteller and the way she leads readers through Sebastian’s kidnapping and the emotional aftermath is worth the price of admission. However, what makes this novel shine is the twist it takes the second readers get comfortable with Marin’s devastation. By switching to a new problem, everything that came before it is amplified and Marin’s new reality takes on a different, infinitely darker share. When she decides to look into her husband’s mistress and visits her place of work, the novel enters a stage in which anger reigns, resentment is constant, and pain becomes a driving force that pushes forth a plethora of bad decisions:

If it’s possible for a person’s blood to boil, then Marin’s sure as shit is. Her temperature shoots up so hard and fast, she wonders if she’s having a hot flash. But as strange as it might sound, it’s helpful to know who, exactly, is trying to destroy her life. The person who took Sebastian doesn’t have a face. But the woman trying to steal her husband does.

The biggest surprise in Little Secrets is the way Derek’s lover morphs into a crucial character with her own voice. While many contemporary authors would have left her alone in order not to have to juggle a whole new multilayered character and everything that implies, Hillier gives her a life, a past, a story, and a voice. This helps readers see her for everything she is, and it creates a much stronger showdown between the women than it would if she had just dismissed as the young mistress. Here, again, Hillier demonstrates a knack for finding elements that will place readers in uncomfortable, shaky moral and psychological ground. In fact, there are even passages in which the young woman embodies class resentment and others in which she allows Hillier to explore the role of social media in our lives. A perfect example comes after she has taken a dozen selfies looking for the right one and the reactions it gets act as a coping mechanism that is stronger than alcohol or drugs:

Seeing the likes and reading the comments eased her anxiety at having to go back down to the basement. Compliments from people she doesn’t know might be superficial validation, but hey, they’re better than nothing.

Little Secrets is a novel about how little peccadilloes can snowball and become huge problems that can change lives forever. It is also a sharp, emotional narrative that delves deep into the ways trauma affects relationships and how financial security can sometimes drive good people to do bad things. Ultimately, the way Hillier presents all her characters and situations make this a very human novel in which there are plenty of actions that will make readers want to judge characters but also enough pain and desperation to make them withhold judgment because, as Hillier states: “You do batshit-crazy things when you’re drowning. When you’re underwater, you’ll grab on to whatever’s closest to you if it means you can take one more breath.”

Simultaneously suspenseful and brutal, this is a superb novel that adds yet another win to Hillier’s already impressive oeuvre. Don’t miss it.