November 18, 2019
Killing Quarry by Max Allan Collins, bestselling author of The Road to Perdition and several other Quarry novels, features the hitman hero of the acclaimed Quarry series on Cinemax. Quarry is back on a new assignment—to find out who put out a hit on him. . . 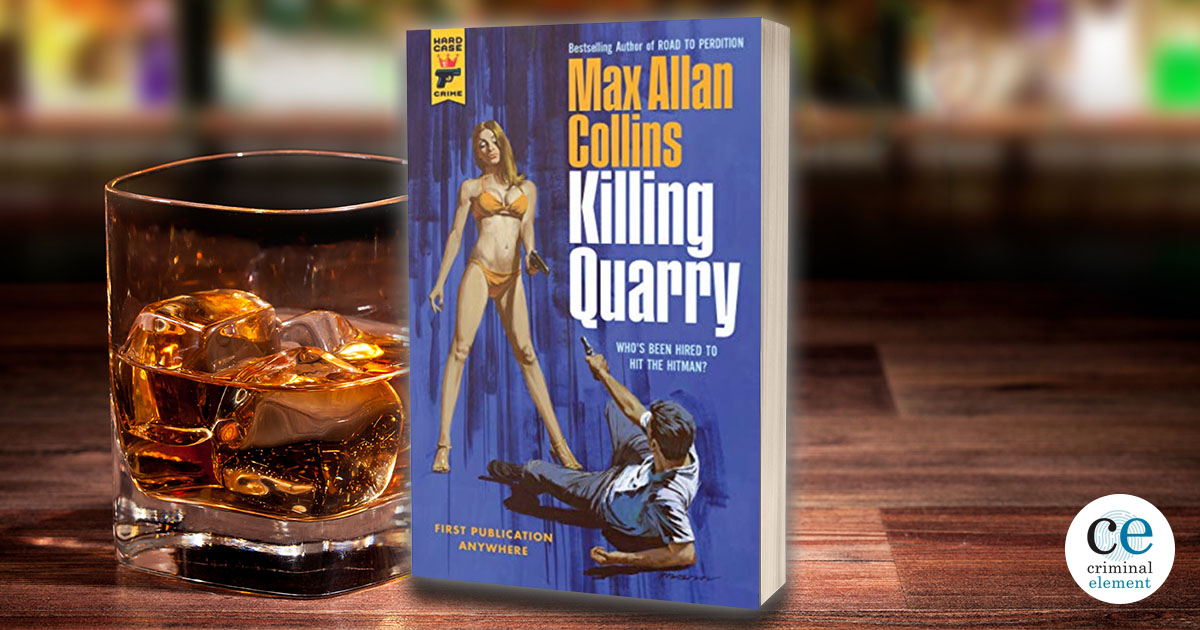 Killing Quarry is the newest book in the Quarry series by Max Allan Collins. Collins has written several other Quarry novels for Hard Case Crime, a Quarry graphic novel, and his Quarry character was the focal point of Cinemax’s eponymous series. It is not the most recent novel, in terms of series chronology, as Collins states in his author note that the book would immediately follow Quarry’s Deal, originally published in 1976.

Killing Quarry functions well as a standalone or as a gateway into the series. This was my first exposure to Quarry, and Max Allan Collins for that matter (other than the 2002 film Road to Perdition). When this novel takes place, Quarry is an aging hitman. A former Marine sniper who served in Vietnam, his transition to hitman upon his return stateside seemed only natural—though if anyone asks him, Quarry is the humble owner of Wilma’s Welcome Inn, a shabby one-stop gas station, restaurant, grocery store, and lodge. We learn right off the bat that Quarry has been in the game long enough to attract several enemies and literally change the game of contract killing.

After a falling out with his previous employer, the Broker—a middleman who assigned hitmen like Quarry to the various clients/contracts that he negotiated—Quarry works for himself with the help of the Broker’s list. Quarry is the only person with a comprehensive list of all the hitmen/hitwomen on the Broker’s bankroll, and he utilizes this to his personal, monetary advantage. Quarry tracks hitmen to identify their targets, and then warns the soon-to-be-murdered people about their impending doom, which he then offers to prevent for a modest fee (a hitman has to eat). For the right price, Quarry will even snuff out the client who took out the kill in the first place. Talk about a backfire.

Above all else, Quarry is a businessman and a savvy smooth-talking one to boot:

I was a businessman charging for a service. Like a lube job or fries with that. As for informing the victim that death was coming for him, that was complimentary.

But taking out the contract killers—preventing the immediate threat to somebody’s ability to breathe—that’ll cost you. And it costs you more if I can determine—and remove—who took the contract out on you.

And Quarry is content with this existence, until on one job while surveilling a hitman he plans to undermine, he discovers something unsettling—Quarry himself is the target of the hit. But who would take out a hit on our lovable, sailor-mouthed protagonist?

Quarry, with the realization that he’s tracking the man who’s trying to surveil him, anxiously awaits the encounter with the hitman in his little A-frame. Quarry pretends to go about business as usual so he can ambush the man who’s trying to kill him. Maybe because he’s an older man trying to play a younger man’s game, Quarry slips up and the hitman gets the jump on him. The hitman, Bruce Simmons, has only spared Quarry because he knows about the Broker’s list, (hidden away in a secret location only Quarry knows) and he wants in on Quarry’s hustle—for a whopping 25% of the take. Quarry, ever the tough negotiator, tries to overpower Bruce and is just about to meet an untimely, bloody end when Glenna Cole (a.k.a. Ivy, a.k.a. Lu, short for “Lucille”) puts a bullet in Bruce’s head.

Lu is Quarry’s former lover, and both inhabit the gritty world of contract killing. They hadn’t been in touch for years, and yet, Lu killed Bruce—her more recent colleague—on a spur of the moment decision to save Quarry. How sweet.

But Lu claims the decision was business-driven since her former colleague was less than the ideal partner:

“He’d talk about his little family and how much he loved his wife, how crazy he was about her, but then he’d tomcat around on the job. A kid away from home.”

“No. First of all, what the hell kind of immoral shit is that? Second of all, I like working with somebody whose mind stays on the job.”

I sipped Diet Coke. “Ever cause you any trouble?”

“Couple times,” she admitted. “Twice jobs almost blew up in our faces. Because his eye wasn’t on the ball. On balling, not the ball.”

We learn that Lu’s boss, the Envoy, took out the contract to have Quarry killed. He feared that Quarry might take him out next. Now that the newly reunited duo is working in tandem, Quarry can finish what he started. Quarry and Lu follow a paper trail that leads them to a seminar on banking in the Cayman Islands, which is held at the Lake Geneva Golf and Ski Resort with four other suspicious attendees, one or all of whom Quarry suspects was integral in placing the hit on him.

More: David Cranmer’s review of Quarry in the Black by Max Allan Collins

Killing Quarry is a great addition to Hard Case Crime’s list. Overall, it’s really fun, fast-paced crime fiction. Collins keeps you turning pages with snappy dialogue, and he writes closely from Quarry’s perspective as if Quarry is journaling or writing his own story to record his legacy. And of course, Quarry’s story is rife with sex, tongue-in-cheek jokes, and personal asides for the reader’s benefit, like in this scene where Quarry negotiates a contract with a man while being held at gunpoint:

He obviously had no intention of giving me anything but a bullet. But by negotiating like this, he clearly figured he’d make me believe his offer was the real thing. Unfortunately for him, I was no dope or stooge, either.

Still, he was the guy with the gun. Always a plus in any negotiation.

While Quarry—our protagonist/anti-hero—can certainly raise eyebrows with his less-than-P.C. narration, his self-deprecating humor and underdog status in a world of even more reprehensible enemies leaves the reader hoping he comes out on top. I thoroughly enjoyed Killing Quarry and would strongly recommend it to anyone interested in hard-boiled crime fiction. It’s fine to jump in with this book since Quarry himself brings you up to speed on his life at the start, but if you’re interested in reading the Quarry series in order, this site can help. I’m excited to go back to the origin to watch this violent story unfold, and I’m crossing my fingers that Max Allan Collins will continue to fill us in with more accounts from Quarry’s life.