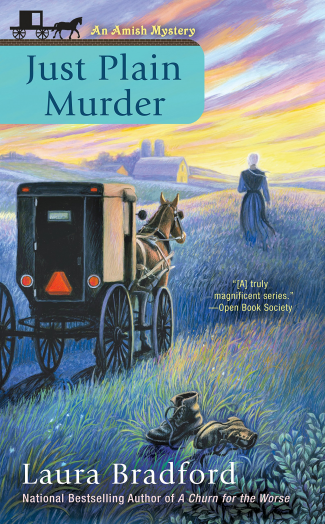 I’m definitely one of those readers who has a weakness for mysteries set in Amish country, in large part because the authors who tackle the subject tend to have a keen eye for juxtaposing that upright way of life with the depravity of murder. Laura Bradford is one of these talented writers. With this sixth book in the Amish Mystery series, she pens a compelling tale of an amateur sleuth whose beau happens to have left his Amish community in order to protect and serve all the people of his hometown.

Though Claire Weatherly is a transplant to the Pennsylvania town of Heavenly, her boyfriend, Jakob Fisher, grew up in the area. His life changed forever when, as an Amish boy going about his daily business with his family, he witnessed the then-police chief Russ Granger apprehend a criminal:

“Anyway, this guy comes running out of a shop. And by running, I mean running. Anyway, a few seconds later, the shopkeeper comes out and starts yelling that this guy stole something from his store. Russ, who must have been sitting by an open window in the station house or something, comes running out, takes no more than a split second to get his bearings, and takes off after this guy. Before Dat’s horse had all four feet on the gravelly part of the road just past what is now Yoder’s Furniture, Russ had this guy on the ground with his hands behind his back.” Jakob slid his gaze back to Claire’s. “I… I don’t think I can ever explain just how taken I was with that–how in awe I was of Russ and the entire police profession even though I wasn’t supposed to be in awe of anyone other than God.”

This birthed a fascination with law enforcement that not even a Rumspringa spent shadowing the local police force could cure him of. Jakob eventually decided to forsake his baptismal vows in order to pursue a career as a cop, and Russ played a large part in ensuring that the young man had a stable support system outside of the Amish community that shunned him as a result of that choice. Russ has since retired, but a visit back to Heavenly has him calling Jakob to come hang out and catch up at a local bar. Jakob puts off meeting his old mentor due to wanting to meet Claire early the next morning, a choice that causes him immense guilt when he learns that Russ was stabbed to death that very night.

Claire, of course, does her best not only to support him emotionally but also in his investigations. For once, however, it might be the emotional part that feels like heavier lifting, as besides the sense of responsibility Jakob feels, there’s also the ongoing question of his relationship with his family. Claire has been gradually working at strengthening ties between Jakob and his estranged brethren, and while she’s had some success with the younger members of his family, the older ones have proven more difficult to reconcile:

Still, life had a way of superseding the Ordnung on occasion, necessitating conversations in spite of the generations-old unwritten code that forbade them. Sometimes those conversations had been official–questions that needed to be asked and answers that needed to be given in relation to a crime that affected Jakob’s former brethren. But sometimes, those same conversations led to something more genuine, like the shy smiles or seconds-long eye contact the detective treasured like others treasured warm hugs and affectionate pecks on the cheek.

It was the one part of Amish life Claire would never understand. The fact that someone as good and decent and honorable as Jakob was denied relationships with his loved ones because of a choice to protect and serve was simply too bitter of a pill to swallow.

Laura Bradford’s mastery and genuine appreciation of contemporary Amish culture made this book a delight to read. Before Just Plain Murder, my main acquaintance with her writing was with the significantly more lighthearted Emergency Dessert Squad mystery series. I was struck not only by the entirely different tone of this novel but also with how capably she manages both atmospheres. Sometimes when authors write more than one series simultaneously, they often feel different only in the details. Ms. Bradford, on the other hand, has created two equally compelling, original milieus that could only be mistaken for each other in how heartfelt they are in appreciating the communities and families that we build for ourselves as independent adults.