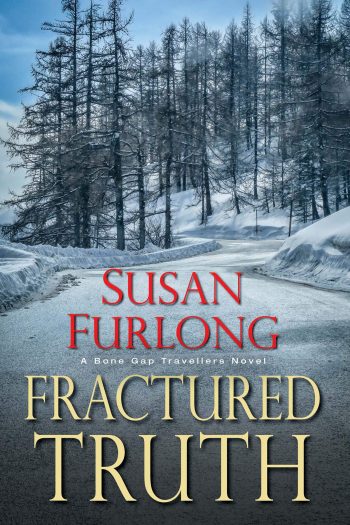 “Travellers?” you ask. “Travellers,” I reply. As an Irish-American, I have always been fascinated by Irish Travellers, people who have lived in Ireland for centuries and stay by themselves away from all others. They follow their own sets of traditions. The one major change is they no longer travel in horse-drawn wagons but now make their homes in caravans, or what we would call recreational vehicles or RVs. Here is Liam Clancy describing the life of a “Freeborn Man of the Travelling People”.

In the introduction to Splintered Silence, the first book of the series, Susan Furlong tells the reader how she first met some Travellers whose families moved to America more than a hundred years ago. They still keep the old ways and follow the old customs, leading an itinerant life. Fortunately for us, Susan decided to follow her curiosity and invest her talent to create Brynn Callahan, a Traveller and Army veteran of the war in Afghanistan who suffers from PTSD. Now a deputy sheriff in McCreary County, Tennessee, Brynn moves between two worlds, the Travellers and the outside world. I’ll let her tell you:

During the Great Famine, my nomadic Irish ancestors migrated here, looking for work and a place to preserve their itinerant culture, but somehow ended up settling in this backwoods area of Appalachia. We’re known as Travellers or Pavees as we call ourselves. Gypsies, knackers or pikies, as others sometimes call us. I’ve been called them all. And worse. But prejudice poisons both ways. Most Pavees despised “settled” or non-Traveler folks. Sometimes it was difficult to discern “who hated who” the most.

When Brynn is assigned to respond to a call about a dead body, she is distressed that the mutilated body is Maura Keene, a teenaged Traveller who recently became engaged. Brynn dreads having to question Pavees and expects that she will be pushed away like an outsider. She isn’t wrong. Listen to this conversation she has with her grandmother.

“And are you muskers questioning any settled people?”

“Gran, please, don’t call me that.” Muskers was a not-so-polite Pavee word for “police.”

“It’s what you are now.” She sat back, her arms crossed over her thin frame. Her words, laced with disappointment and bitterness cut to my core. She got up and scraped her dinner in to the garbage. “Nothin’s changed, has it? Us gypsies are going to get blamed for everything that goes wrong in this community. The muskers go after us when something goes wrong. Now you’re doing the same. My own granddaughter. And people don’t like what you’re doing. That you’re working for the cops. And I’m paying for it. My friends, they don’t trust me no more.”

So you can see the problem Brynn has. Although she is clearly the deputy most suited to investigate Maura’s death, the personal cost is great and her struggles with PTSD and self-medication (booze and pills) add to her inner chaos. Still, she plows forward with a massive determination to set things right.

Maura is not the only dead body in this story. She is merely the first. And her death pushes Brynn further into a clash of cultures that may never be fully unraveled. I can tell you this. I cried as I read the final pages. Not sobbing, just a tear or two for all the unkindness and lack of understanding that led to so many deaths. I promise once you begin reading Fractured Truth, you will not be able to put it down. And when you are finished reading, the story will stay with you forever.