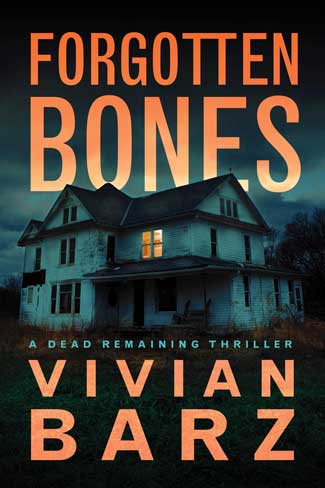 Forgotten Bones by Vivian Barz is the first book in the new Dead Remaining series, where an unlikely pair teams up to investigate a brutal murder in a haunting thriller that walks the line between reality and impossibility.

Perrick, California, is a sleepy small town that doesn’t get much by way of crime. Police Chief Ed Bender is on the verge of retiring and is happy not to let anything get in the way of his tranquil journey there. This sometimes irritates Officer Susan Marlan, the subordinate he mentors like a daughter. It isn’t that she’s ambitious, exactly, it’s just that she knows she’s capable of more job responsibility than she’s being given.

What stung Susan most was the way Ed had indirectly pointed out her lowly standing on the force by highlighting his seniority, which she could hardly be blamed for. It was, as Susan so often reminded herself, one of those things that were entirely out of her hands. For her age and number of years on the job, Susan should have possessed a higher ranking. Much higher. And had she been at a station in a larger city, she probably would have already made detective. But in Perrick, it simply wasn’t possible. It wasn’t that she’d been passed over for promotions; it was that there were no promotions to give. They were a small force with small-time crimes (until now), and their allotted staff budget reflected this. The only way to move up, it seemed, was to wait for a higher-up to quit, transfer, retire, or die.

Their relationship is further put to the test when the body of a small boy is found on the outskirts of a farm owned by convicted pedophile Gerald Nichol. Susan is eager to investigate, but when more bodies turn up, Ed is only too happy to hand over the case completely to the FBI. Susan’s efforts to help get her sidelined to interviewing tipsters, which is where she crosses paths once more with the cute drummer who recently moved to town.

Eric Evans isn’t just a musician, though—he’s actually a college professor who agreed to help out one of his students whose band was missing a member for a gig. He and Susan hit it off when they met during an intermission, so he’s mortified to find that she’s the one taking his statement when he shows up at the police station to volunteer what he knows about the bodies. Ordinarily, being a good citizen isn’t the kind of thing he’d be embarrassed by. Trouble is he got the information that he has through means he can’t entirely explain.

At first, Eric tries to rationalize the visions he’s seen in relation to the corpses as part of the schizophrenia he was diagnosed with as a teen. But as the visions intensify and leave physical evidence behind, he begins to fear for his sanity in a way he never has before. Desperate to allay whatever forces are besetting him, he decides to report what he’s seen to the proper authorities in hopes that taking action will be enough to make the hallucinations go away.

Susan is understandably skeptical of his claims, but when he reveals knowledge he couldn’t possibly know—that she isn’t even supposed to know given how she’s been sidelined—she begins to wonder if she might have finally found an ally in her quest for the truth. Gerald has disappeared, and the FBI seems to have run out of leads. What harm could there be in following Eric’s lead?

Plenty, as she’ll find out in this deliciously creepy twist on small-town police procedurals. Straddling the line between paranormal and horror, Forgotten Bones is, first and foremost, a solid mystery story with excellent characterization. Susan is a terrific creation; she’s smart and spirited, though definitely less worldly than she should be due to the limitations of her posting. But the true star of the show is Eric, who was created by author Vivian Barz in tribute to a friend with schizophrenia who wanted to see someone with the condition portrayed as the hero of the piece. Ms. Barz has clearly done a lot of research on the subject, and it shows in her writing.

Do not pass flashes of light. Do not collect pills. Go straight to crazy. This was a saying of Eric’s from way back, a private joke he’d used during times his schizophrenia had reared its ugly head violently, unexpectedly, and without prodromes.

Prodromes, Eric’s most valued tool against insanity, acted like a warning system inside his head. Like many schizophrenics, Eric’s prodromes were as personalized as a fingerprint; in his case, it was the phantom smell of fresh-cut grass and the sound of parrots squawking. When he imagined either of these two things, he knew to hunker down fast, because shit was about to hit the fan. Big time.

As I very much enjoy diverse representation in my reading, I thought it was awesome that the hero is a person with a mental illness who is handling it responsibly and whose plight is never romanticized or vilified. Following Eric and Susan—both individually and together as they try to make sense of what’s happening in Perrick—is great, twisty fun, particularly if you like a bit of ghostly horror with your crime novels. This is a great first installment in the Dead Remaining series, and I’m excited to read more—especially with leads as fresh and engaging as these.