Book Review: Flour in the Attic by Winnie Archer 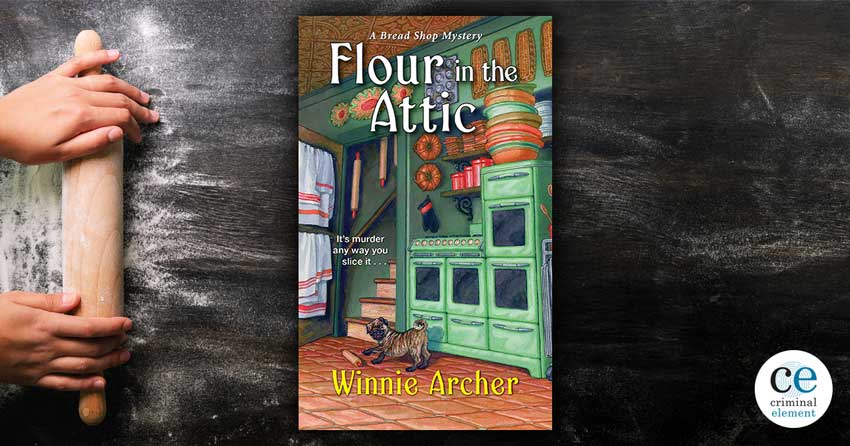 Flour in the Attic by Winnie Archer is the fourth book in the Bread Shop Mystery series, where Ivy Culpepper keeps the ovens hot at Yeast of Eden, a Northern California bakery that specializes in traditional breads, but now has to deal with a stone-cold killer.

Ivy Culpepper is on tenterhooks waiting for her best friend, town sheriff Emmaline Davis, to propose to Ivy’s brother, Billy. But the romantic moment is indefinitely postponed by the discovery of a dead body in the waters off their coastal California town of Santa Sofia. After Emmaline is called to the scene, Ivy is shocked to learn that the dead woman is Marisol Ruiz, who was not only a waitress at the restaurant Ivy’s boyfriend, Miguel Baptista, owns but also Miguel’s sister’s mother-in-law.

Marisol’s husband, David Ruiz, is more than shocked, insisting that there was no way a competitive triathlete like Marisol could have drowned. Knowing of Ivy’s success in helping solve several recent murders, he begs her to help him discover the truth—to the consternation of Marisol’s grieving adult children. When the autopsy report confirms that Marisol was indeed strangled before being thrown into the ocean, Ivy must dive into a tangled web of inheritances and deceit to uncover the truth for people she considers family.

In this, Ivy is ably assisted not only by Miguel—who is supportive without being rash, possibly my favorite combination of traits in the romantic interest of a culinary-cozy heroine—but also by two of her most steadfast supporters since returning to Santa Sofia.

Olaya Solis is the owner of Yeast of Eden, the bakery where Ivy occasionally works, mostly to learn the art of bread-making from the uniquely talented Olaya, who knows everything there is to know about dough. While Ivy is primarily working on her own photography business, she also has a healthy appreciation for Olaya’s skills:

I walked to the rack to get a look at the finished sfogliatelle, my lips parting in awe as I saw them all lined up, row after row after row. There had to be at least sixty here already. They had puffed up during the baking process, and looking closely at them now, I saw what the rolled pinwheels had created. The process of rolling the thin layers of dough into rounds, then pressing them out into cones, had created layer upon layer upon layer of flaky pastry. They looked like stacks of leaves, I thought. Each one was a work of art. I took my camera from its bag and snapped a few pictures. The pastries were delicate and beautiful, and I wanted to capture them on film.

Her other ally is Penelope Branford, her former English teacher turned neighbor and occasional pet sitter. While Olaya is content to bake and dish out good advice, Penelope—who will always be Mrs. Branford to Ivy—takes a more active role in their investigations, occasionally getting herself into sticky situations that she escapes with the winsome charm of a spry octogenarian. But she has more than just age in common with Olaya, for her insight into the human condition is just as sharp, as here where she’s counseling Ivy on the mindset of a man who would show up on the doorstep of an ex who no longer wants him:

“People rewrite their history,” she said. “What actually happened is reworked and reworked and reworked in their mind until the new version becomes the truth. It’s revisionist. If things are bad with his current wife, he’s compared that to how he remembers them being with [his ex], and of course the grass is always greener. He has let his mind focus on the good things in their marriage, burying the bad things. The truth of his affair and their incompatibility is all pushed aside. Instead, he remembers a fairy-tale version, which allows him to villainize his wife, and gives him the courage to come here and want to rekindle what he thinks was a better relationship.”

With the help of her friends, Ivy cleverly cracks open a complex case involving a criminal conspiracy. I loved the emotional nuances of Flour in the Attic, right up to the complicated culpability levels of our villains. The cliffhanger at the end also leaves you wanting more, even as the astounding food descriptions sharpen the appetite for all the delicious dishes described within.

I was actually pretty sad that there weren’t any recipes included in this installment, but it seems that only the odd-numbered books have them. I’m looking forward not only to finding out if Ivy really is in trouble in the next book but also whether there will be any recipes to accompany the amazing food and pastries described in the novel itself.