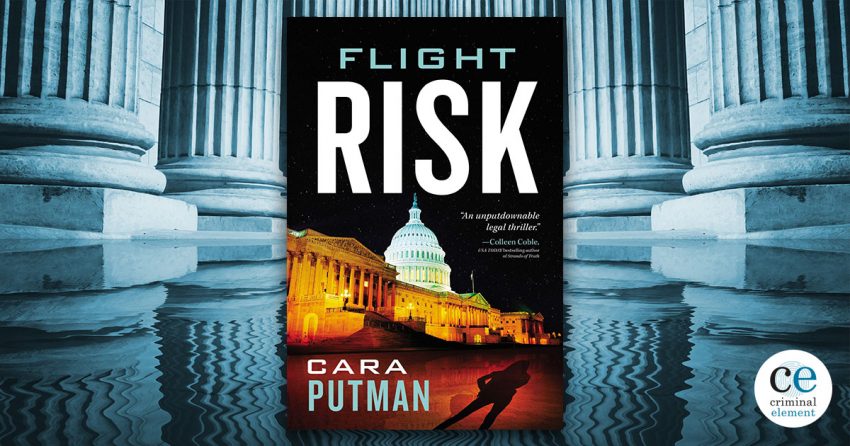 “The truth shall set you free,” immortal words found in the Saint James Bible. But for the purpose of Flight Risk, Gloria Steinem’s take on it might work better, “The truth will set you free, but first it will piss you off.” Journalist Jett Glover is motivated daily by a gut-level desire to investigate every scintilla of evidence before his stories go to print. Why? When Jett was twelve, his father died of a broken-heart because he was the target of an untruthful news story that besmirched his reputation and life’s work. Jett tries repeatedly to interview lawyer Savannah Daniels before his latest story (the one that has Pulitzer written all over it) goes to print. Jett has uncovered “an international sex-trafficking exposé.” His story “will bring down a celebrity baseball player and the men closest to him, including Savannah’s ex-husband.”

Jett Glover is nothing if not persistent. He finally gets past the vigilant receptionist at the law office and breaks the news to Savannah, who quickly reminds him that the man he is investigating is her ex-husband. Not easily deterred, Jett continues trying to find the name of the 4th man in the sex-trafficking circle. He presses Savannah hard.

“Did you know Dustin Tate was a private pilot for wealthy bad boys who have more time and money than good taste? He may have done more than fly them.”

Her nostrils flared as she coolly studied him.

“Did he like to live the high life when you were married?”

“On what we made?” She stared at him like he was mad. “Even if he did, why would that be relevant today?”

Savannah is just about to turn forty. It’s been 15 years since she was married to Dustin Tate. He betrayed her and left her with a profound distrust of intimacy. The three things important to her are her small law practice, her friends and colleagues, and lastly, being “the loyal aunt her troubled niece can always count on.” She has no patience for what she considers to be inane questions, but she reluctantly listens a little longer.

“I’ve investigated a group of four men who make trips to Thailand and other countries in Asia about once a quarter. Your ex is one of them, the pilot for each flight. Seems to participate in their in-country activities too.”

She shrugged, an elegant motion. “I don’t see why that’s newsworthy.”

Savannah has heard enough, and she tells Jett to leave. Besides, even if she wanted to hear more, she is shepherding a complicated, time-consuming patent case through its paces. Jett’s editor insists on publishing the exposé, even though Jett has been unable to discover the name of the fourth member of the sex-trafficking ring.

Then all hell breaks loose. A plane crashes in Washington, D.C. and two of the men named in Jett’s story are on board, former baseball player Logan Donnelly and Savannah’s ex, Dustin Tate. About half of the passengers are rescued but Donnelly dies a hero, helping a woman scramble out of a frigid river. Tate is taken to the hospital: Savannah, her sister, and her niece race to his side. Savannah talks to Tate and what he tells her throws Jett’s story into disarray.

“I didn’t do anything that reporter said.” His eyes flashed with a life that hadn’t been there a minute before. “I don’t know where he got his information but it’s wrong. Dead wrong.”

“Then fight back.” The words burst from her.

“More than working for athletes too rich to be told no? Do I even want to know how much of that article is true? She stood and stepped back. “You disgust me.”

“There’s a lot you don’t know, and if I explained, lives could be in jeopardy.”

Savannah doesn’t believe Tate when he tells her that the trips were “honorable”. But his words haunt her when Tate is murdered after he’s released from the hospital. Savannah is the executor of Tate’s estate. He told her that he had “proof stashed away” that would show his innocence. After his death, Savannah joins forces with Jett to discover the truth. Jett tries to resign from his paper, now convinced his meticulously researched story was inaccurate. His editor doesn’t accept it, telling him instead to “write an editorial about truth.”

What moves Flight Risk into the category of romantic legal thriller is the developing relationship between Jett Glover and Savannah Daniels. More importantly, Savannah’s clients (from the patent case) are involved, according to the FBI., in the plane crash. The converging plots crash and implode, producing an alchemy familiar to lovers of Joel C. Rosenberg and John Grisham. Cara Putman is a practicing attorney and her expertise shines through every paragraph.