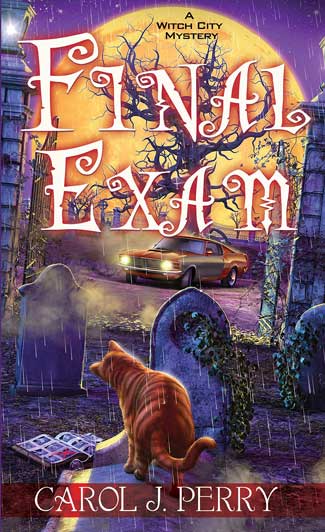 Salem, Massachusetts-born scribe Carol J. Perry was born on Halloween Eve. This might seem fortuitous given the fact that she writes the Witch City cozy mystery series for Kensington, which now boasts eight titles. Perry, who currently makes her home in the Tampa Bay area of Florida, revisits her old stomping grounds with Final Exam.

As the story opens, readers find WICH-TV field reporter Maralee “Lee” Barrett and her camera person, Francine, first on the scene at an abandoned granite quarry where an anonymous tip has led to the discovery of a vintage red Mustang submerged in the murky depths of the water. While authorities—including Lee’s boyfriend, Detective Pete Mondello—remain tight-lipped about the details, it’s not exactly a secret that the car is thought to contain human remains. Lee, who is both the newest and youngest on-air talent at her station, is determined to break the story and stay ahead of the competition—though the realization that her beloved Aunt Ibby may have knowledge of the Mustang and its skeletal occupant threatens to complicate things.

Lee was raised by Ibby after being orphaned and lives in her aunt’s attic apartment with their shared cat, O’Ryan (who once belonged to a witch and has psychic abilities). Consequently, their daily lives are very much intertwined—so much so that Lee begins to suspect Ibby, who is heading up the planning committee for her 45th high school reunion with five longstanding friends, may be deliberately withholding information pertaining to “The Mystery of the Muddy Mustang.” (Lee’s a bit of a Nancy Drew devotee. Can you tell?)

Forensic testing identifies the remains as those of Ted Thorne—who went missing in 1974—and confirms foul play (shooting) as the cause of death. Turns out Ted was Ibby’s high school sweetheart and was equally tight with the other members of her still-close-knit group. Could one, or more, of them be his killer?

Lee’s job gives her a legitimate reason to keep digging (beyond her aunt’s association with the victim), which occasionally puts her at odds with Pete, though their dynamic is defined more by mutual concern than competition (not to mention a ravenous appetite for late-night coffee and ice cream). Lee also gets some helpful insights from O’Ryan, who has psychic abilities, as well as the visions she herself is prone to having—though the significance of these is often ambiguous. Still, these supernatural elements don’t overwhelm the narrative, nor do they violate the author’s oath to play fair with the reader. Rather, they augment the investigation while enhancing Perry’s depiction of Salem’s unique charms.

The plot unfolds relatively briskly, with Lee’s personal and professional lives clashing as past intrudes on present. This heightens the suspense proportionately, given the stakes of those involved. Lee’s compulsive notetaking and propensity to document even the most minute details, nonetheless, can be both repetitive and somewhat tedious; so too the author’s habit of having her deliver on-camera reportage, which often serves as unnecessary summation and detracts from the action. It’s a question of balance, and sometimes the scales are a bit askew. Admittedly, these are minor quibbles, and the story ultimately triumphs over them.

Final Exam, then, earns high marks for being a clever, character-driven whodunit that’s firmly entrenched in a sense of time and place without being overshadowed by it. Carol J. Perry writes with alacrity, casting a spell that will leave readers old and new bewitched, beguiled, and begging for more.