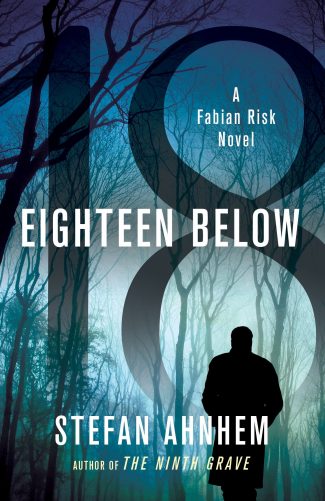 Eighteen Below by Stefan Ahnhem is the third book in the internationally bestselling Fabian Risk series, a chilling story of stolen identity and serial murder.

Even on a bright day in May, there’s a chill in the atmosphere in Helsingborg, Sweden. Stefan Ahnhem grabs our attention with a gripping opening scene and then effortlessly juggles several intertwined stories.

The day starts badly for Astrid Tuvesson, chief of the Helsingborg crime squad. She has an alcohol-induced headache/hangover that she fears will “cause her skull to explode,” and the springtime sunshine isn’t helping. Why not spend another day at home—after all, what’s “three days sick days since last Monday,” compared to her co-workers’ habits?  But backing out of her driveway, Astrid slams her Toyota Corolla into her mailbox, which is embedded in a “giant clump of cement under the ground.” Things don’t improve once she’s on the northbound E20: an expensive red BMW sideswipes her, taking out her driver’s side mirror. The chase is on. She holds up her police badge to the driver and flashes her high beams.

But the BMW didn’t slow down. It went faster. The driver obviously had no idea who he was dealing with.

“Driving like a god,” Astrid captures the manic chase on her phone. Eventually, the two cars end up in central Helsingborg, near the old ferry station. Astrid is thoroughly disoriented: “everything was spinning as if it were Midsummer and she had gone all in on a game of dizzy bat.”

The BMW sailed right over the edge of the quay and flew several metres through the air before striking the water. Astrid kept running, and she noticed that others were now rushing from different directions and gathering in a cluster at the water’s edge.

She’s stunned. Who would have expected the driver to plunge his car straight into the icy, dark waters of the Öresund strait? That’s the question confronting Fabian Risk and his teammates, all ostensibly working for Astrid Tuvesson, who’s been somewhat MIA since a bitter breakup with her significant other. The dead man at the wheel of the BMW is Peter Brise, one of the city’s richest tech entrepreneurs and the founder of the aptly named Ka-Ching company. The police assume it’s a suicide until pathologist Einar Greide, aka Braids, tells Fabian that Brise didn’t die that morning, “he died about two months ago.”

“Huh? What do you mean, two months ago? Wasn’t he the one in the car?”

“Oh yes, he was indeed. But he was frozen when the car filled with water.”

“Frozen,” Fabian repeated. “What do you mean, frozen?”

“As in, as cold and hard as my lamb chops out in the storeroom.”

Just as Fabian and his co-workers broach the touchy subject of Where’s Astrid, she joins their confab and shares her story. The team pours over Astrid’s phone-filmed-chase reel. They make the momentous discovery that the driver is wearing a wetsuit. Which leads them to assume he probably retrieved Brise’s body from the trunk when the car was submerged, putting him behind the driver’s wheel.

Eighteen Below is a thoroughly complicated story. Ahnhem’s precise descriptions add verisimilitude to an avalanche of details and deaths. Fabian visits Brise’s charming and lavish apartment on the fourth floor of his trendy downtown building.

Each apartment must have had four- or five-metre-high ceilings, or there would be more floors.

Another sign that this place was out of the ordinary was the way it smelled. It was that very particular combination of old and dazzling clean that you usually only encounter in museums.

Fabian finds evidence that Peter Brise was killed in his apartment, so imagine his surprise when a stranger enters using a key. It’s a realtor, who tells Fabian he met with Peter Brise two days prior. So now, on top of everything else, the police are now confronted with sophisticated identity theft, and Peter is just the first. Tension is heightened by a string of unnerving murders and lastly, Fabian and his artist-wife Sonja are at odds. It’s a critical time in their marriage that is made worse by Sonja’s successful art opening.

Through it all, Fabian is the consummate professional—regardless of the burgeoning number of investigations he juggles, he knows “that the responsibility to find out now rested with him.” Fabian Risk is a man who solves puzzles—to paraphrase Braids, that’s the point of Fabian’s job—to keep on searching until he finds “an explanation that makes sense.”