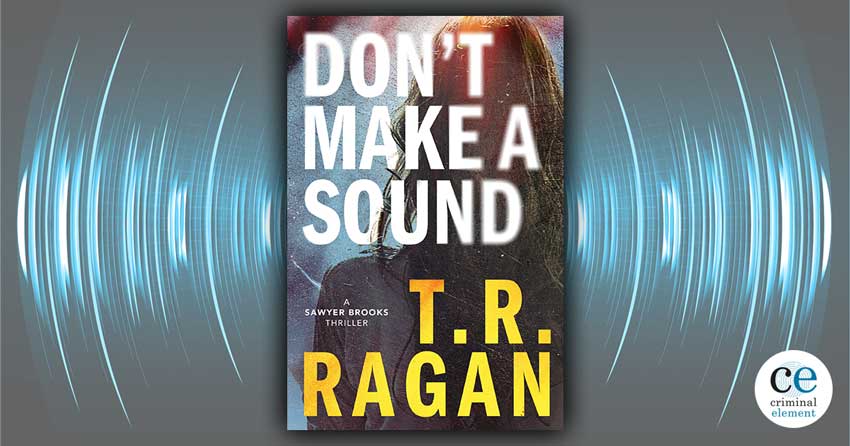 Don’t Make a Sound by T.R. Ragan is the first in the new Sawyer Brooks Thriller series, where the journalist’s own past could be a reporter’s biggest story in this twisting thriller about murder and family secrets.

T.R. Ragan’s new Sawyer Brooks series is unsparing in its examination of sexual abuse, torture, and pre-meditated murder. Sawyer Brooks is a 29-year-old Sacramento journalist. Her traumatic childhood experiences at the hand of her uncle impact her daily, even after years of therapy. Sawyer’s older sisters, Harper and Aria, were also victimized. Years later, the sisters are not particularly close.

Their connection ran deep. Rape, torture, and years of anguish had brought them together. They knew one another’s stories, and they trusted each other fully. They hadn’t joined forces to provide emotional support, although much of what they did was therapeutic. The header pinned at the top of their page read Deterrence, Restitution, and Reformation.

The Crew plans to target and punish their abusers before releasing them back into society. Their motto, “One Douchebag at a Time,” sums up their approach. The scheme is potentially a recipe for disaster—there are valid reasons why frontier justice is no longer de rigueur.

During her five years at the Sacramento Independent, Sawyer progresses from an intern to a researcher/editor before “finally landing a job as a news and human-interest reporter after another writer moved back East.” Today’s assignment is following up on a kid who was bitten by a snake at a birthday party. Her editor, 35-year widower Derek Coleman, approaches her a little before 9:00 a.m.

She met Coleman’s gaze. His expression told her he had bad news.

Her first thought was: What kid? Second thought: No way. She’d read the stats on snakebites.

How could that have happened? Sawyer grabs her purse and jumps up, intent on going to the hospital. Hold on, Coleman says, “Geezer called in sick.”

“He said you can hold your own when it comes to taking pictures.”

“There’s been a homicide. Forrest Hill Apartments in West Sac. Palmer wants you there ASAP. He said to bring your gear.”

“What the hell?” She pushed her fingers through her hair in frustration. “Why didn’t you tell me five minutes ago?”

A thick brow shot upward. “Because I need the snake story on my desk by seven tonight.”

Working with Sean Palmer has been a dream of Sawyer’s since graduating CSU Sacramento. Her mind starts racing—get home to get her camera, go to the scene, get to the hospital: check, check, check. Why is Coleman still standing there?

“A woman was brutally murdered. From what I’ve heard, it’s a grisly sight.” He looked overly concerned.

“Are you kidding me? All I’ve wanted since I got this job was to work side by side with Sean Palmer and learn from the best.”

Sawyer is nothing if not determined. Keeping her eye on the prize is one tactic for suppressing her internal demons. When she gets home, there’s a car she doesn’t recognize in the driveway—and a strange girl underneath her boyfriend, Connor.

Connor peeked over his shoulder. His face was red from exertion, which made sense considering this was the hardest she’d ever seen him work.

Sawyer doesn’t engage. She grabs her camera and heads out, stopping momentarily to shoo a stray cat out from underneath her front tire. How does she feel? Sawyer examines her emotions, “a pinch of anger, a dab of disappointment, and a bucketful of reality that she wasn’t that into Connor.”

She sees the world through mistrustful eyes and isn’t that surprised. It goes back to her childhood. One night, when she was alone with her Uncle Theo, he turned her over to four strangers. Scared, she said she wanted to go to bed, and a kindly-faced man offered to take her. Was he her savior?

“Don’t make a sound,” he’d said after he closed the door and turned her way. He’d been Satan in the flesh, blue eyes and all, there to strip her of all goodness and light, spending hours on top of her, inside her, his sweat and sour breath all over her, leaving nothing for his friends but bones and whatever else made up the human body, including a darkened heart and a newfound aversion to being touched.

It’s hard to imagine any crime scene could surpass Sawyer’s deeply held memories. She fluently talks her way past the police and slips into the victim’s apartment.

From the looks of things, Kylie had put up a good fight. Plants had been knocked over; there was an open book on the floor and a broken picture frame. Fingerprint powder covered the coffee table. Drop of blood made a path across the hardwood floor.

Sawyer has an eye for the unusual and recreates mentally what might have happened to the victim while taking pictures. Hours later, she wraps up her story on reptile safety and birthday parties. While she was at the hospital, she spoke to the “grief-stricken” man who had handled the reptile at the birthday party. Sawyer “found herself feeling sorry for him.”

Her sisters had accused her, on more than one occasion, of lacking empathy. But Sawyer disagreed. Rather than feeling overwhelmed by the suffering of others, she believed her compassion allowed her to keep emotion out of moments like this.

The day holds still more surprises for Sawyer. Her father calls her to say that “Gramma Sally passed away last night.” Sawyer loved her grandmother deeply. She promises to come to the funeral, even though she is intensely reluctant to go home to River Rock.

River Rock is where she’d been abandoned by her two older sisters to suffer alone, and in silence, the unspeakable abuses of her family. It’s also where Sawyer’s best friend disappeared and two teenage girls were murdered. Three cold cases dead and buried with the rest of the town’s secrets.

Before she leaves work, crime reporter Sean Palmer texts her that he wants to see her. She hands him her USB flash drive, and he examines her pictures. They go back and forth—he thinks her pictures are overly grisly; why didn’t she get everyone’s names—but Sawyer holds her own. Palmer offers her a job on his team. It’s a promotion with more money. She’s stunned, thrilled, but says she can’t start right away because of her grandma’s funeral. Palmer is not pleased.

She spouted the first thing that came to mind. “I’ll get you content,” she said with more desperation than intended. “My hometown of River Rock is practically around the corner from here. It’s a small town that reeks of death, abandonment, and abduction—chock-full of the sort of stories told around the campfire, the sort of stories that make people feel uncomfortable.”

Sawyer Brooks is a compelling heroine, fearless and fierce. Given her past, one might expect moments of fragility, but that’s not her style. She’s compassionate and clear-eyed. Sawyer looks to provide justice and restitution, where possible, through investigative journalism. Her approach is contrasted with The Crew’s frightening descent into the rawest of vigilante justice. It’s no accident that Sawyer’s pitch to Palmer is just what T.R. Ragan’s Don’t Make a Sound offers readers—a compelling thriller that “reeks of death, abandonment, and abduction.” A great debut to a new series.