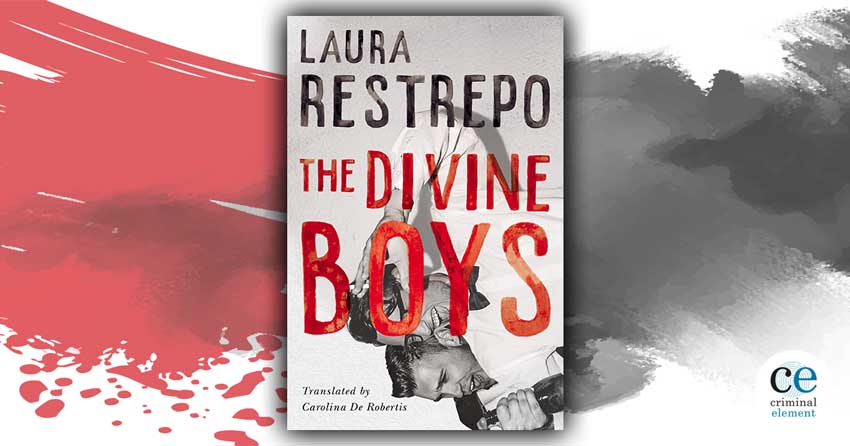 The Divine Boys by acclaimed Colombian author Laura Restrepo is a prize-winning novel inspired by a true crime that shattered a community and exposed the dark recesses of toxic masculinity and privilege.

Claustrophobic and harrowing, this fictionalized account of a true crime that rocked 2016 Bogota is a searing look both at the stratification of Colombian society as well as the mentality of entitlement that allowed one rich white man to think he could get away with murder most depraved. Told from the viewpoint of one of his best friends, it’s an indictment of patriarchy and privilege that’s keenly aware of its Bogotano setting and history—even as it serves as a universal tale of caution for any society that coddles its most powerful.

Five boys meet in secondary school and form an unbreakable alliance: our narrator, the introverted Hobbo; the beautiful Muneco; the aristocratic Duque; the ruthless Tarabeo, and the everyman Pildora. The popular bad boys of Quevedo Prep have a talent for adolescent debauchery that is legendary, with only one rule derived from the famed motto of the Three Musketeers. The maxim “one for all and all for one” allows them to swagger through their teens and 20s, keeping in constant touch. But as their 30s progress, their friendships inevitably loosen. Then, the worst happens, binding them all tightly in a nightmare that forces them to reassess their loyalties as well as reflect on their own souls.

Hobbo is already a bit of an outsider when the book opens. The last to join The Divine Boys, he’s also the poorest of the bunch—though still firmly middle class. He’s in love with Duque’s neglected girlfriend, the supposedly witchy Malicia. When he confides in her that Muneco has been waking him in the middle of the night with creepy phone calls, she prophesies trouble.

A weekend retreat for the five friends to Duque’s luxurious country retreat in Atolaima assuages Hobbo’s fears for a while. But then, Tarabeo shows up at his apartment building, demanding Hobbo erase any incriminating content in a laptop he’s carrying. Hobbo automatically agrees to help, but his discovery of some truly disturbing stuff leads him to a crisis of conscience. When his sister calls, demanding that he turn on the news, he finds that his friends have embroiled him in the kidnapping and murder of a young indigenous girl from the slums—and that the city is ablaze with protests.

He isn’t the only one tormented by his inadvertent role, however, as a conversation with another of his circle regarding their killer friend reveals.

[D]oes he have an inkling of what he did? Will he remember it in anguish, or with total indifference?

“He’ll say he made a mistake, somewhere along the way.”

He’ll say it inside, to himself: Somewhere my calculations failed me. Because when it comes down to it, what did I really do[;] I didn’t do anything or at least not much. Because think about it, who was that girl? She was no one, someone invisible, almost nonexistent. She disappeared? Sure, as if by magic. What’s the big fuss, why does it matter, where was the mistake, a girl is nothing and more so if she’s poor, a poor girl is no one, she doesn’t exist. How many like her vanish every day from those damn slums without the city getting hysterical about it, there’s no outcry, no one even finds out. How many? That girl: just one more.

Hobbo’s attempt to understand—though not forgive or excuse—his friend and to make sense of his own role in what transpired serves as a metaphorical indictment of the kind of people who enable a monster, even unwittingly. Each of his friends stands for a different aspect of patriarchy, from the most brutal to the most benign. Yet all are complicit in the ways they enable and abet, even if they aren’t the ones to actually rape and kill the girl themselves.

The city itself is almost a character in this novel as Laura Restrepo describes its locales and peoples, from its dark, glitzy underbelly to the cold heights where the poor eke out their livings. Class war is an important aspect of this novel given who the victim and murderer are, with society easily grouped on seven levels, from the richest at Six to the impoverished at Zero. But even with all that they already have, those of Six want more from those of Zero.

The people of Level Zero, the extremely poor invaders of hills, have no water or sewage, no bathrobes or slippers, no endless pools, no schools or paving, no Hendrick’s Fever-Tree with a slice of cucumber. But they have something the Level Six folks envy: an immense panorama. They’re the absolute owners of views. The Zero people hold the monopoly on a sweeping vista that can only be enjoyed from the high mountain slums, the way someone on a plane might suddenly see a majestic sky unfold before them full of dawns and sunsets, adorned with lightning, storms, dramatic colors, and triumphant rainbows, as well as clouds that shift from calm to ominous.

The Divine Boys packs a lot of social commentary into its two hundred-odd pages, achieving through fiction and metaphor what weightier tomes often struggle to convey. Ms. Restrepo, through this deft translation by Carolina De Robertis, has written an account of murder, guilt, and culpability that’s both lyrical and heart-wrenching. I was almost sorry to have looked up the actual case this was based on, as the facts differ significantly enough that I wanted Ms. Restrepo’s version to be the entire truth of it. I want to convince myself that the fictional guilt and torment depicted in these pages were shared by the real people whose first instinct in the face of a terrible crime was to cover up for their friend instead of hold him accountable. I’ll just have to hope that this book will help point the way for readers to refute blind tribalism in the present and future—and to choose justice instead.