June 2, 2022
In Emma Bamford's Deep Water the dark side of paradise is exposed when a terrified couple reveals their daunting experience on a remote island to their rescuers—only to realize they’re still in the grips of the island’s secrets. Read on for Doreen Sheridan's review! 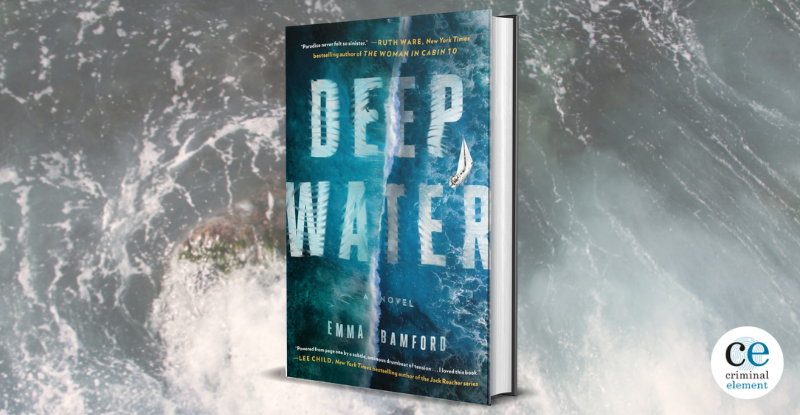 As a Malaysian American with a love of sailing, I was so much looking forward to reading this novel. Deep Water is the story of the Anglo-French Virginie, a surprisingly naive 31-year-old who’s desperate to make a success of her second marriage, to the comparatively poorer British Jake. For their extended honeymoon, they’ve decided to splurge on a 36-foot yacht anchored off of the Malaysian coast and spend several months sailing, first to Thailand and then to wherever the fancy takes them. But an old salt they meet at their original docking gives them other ideas.

Terry is an older Australian man who’s retired to a life on the Malaysian waves. When he hears their plans, he encourages them to abandon the coast and sail two weeks west-southwest into the Indian Ocean to a pristine island called Amarante instead. He himself spent over a decade of dry seasons there with his late wife Eileen, and couldn’t recommend it more for any newly married couple:

“Whose idea was it to go there, Terry?” [Virginie] asked. “Yours or Eileen’s?”

He narrowed his eyes, deepening the creases at the corners. “Do you know, I can’t remember now. But after we had a taste of it that first year, we bloody well went back soon as. There’s something about the place. Not just the beauty. It’s the rawness. The remoteness. Gets in your bones. Feels like you and her against the world.”

“Survive that, and you can survive anything?”

He chuckled, a throaty smoker’s caw. “Exactly. You can’t beat memories like that.”

Spurred by this testament to the marriage-strengthening properties of the island, Virginie and Jake sail up to the fictional Port Brown in preparation for their long trip into the middle of nowhere. While provisioning themselves for the voyage, they meet the wealthy Vitor and his beautiful, if watchful, companion Teresa. Virginie mentions their destination to the other couple, who already have plans elsewhere. Still, she isn’t entirely unsurprised when they show up at Amarante only a handful of days after she and Jake arrive themselves.

There are, of course, a handful of expatriates already moored there. Stella and Pete are a friendly Canadian couple who’ve been cruising on the Swallow for several years, while Australian Roly lives aboard the Ariel with his dog Gus. Roly is also the unofficial leader of their small community, and is thus the person Virginie turns to when she has questions about the ruins of a settlement she finds on shore:

[“]I keep thinking about the people who might have lived here.”

He gave her a long look. “Who was it told you about Amarante?”

“Terry. On the mainland. Terry…” She tapped her chin. She’d never asked him his last name. But she did remember what his boat was called. “From Shangri-La.”

“Ah.” He nodded to himself, as if she’d confirmed a suspicion.

“Yeah. I know him.” He capped his canteen, slid it back into his bag. She caught his smell. “Let me guess–he gave you his spiel about how beautiful it is here. But he never told you the other half of it. Am I right?”

For all its beauty, Amarante has a past filled with sorrow that threatens to spill over into the present day. As the days go by and accidents begin to afflict our travelers, tensions build between what was once a seemingly laidback, carefree group of wanderers. Soon enough, Virginie and Jake find their marriage on the rocks. When their lives are suddenly thrust into mortal peril, will they be able to reconnect before they lose each other for good?

As a cautionary tale of disaster in paradise, this was a diverting read. It also attempts to grapple with the legacy of British colonialism, an endeavor that might have worked better had the author been more cognizant of some of the biases that peeked out through her prose. I get the distinct feeling that Emma Bamford is fond of Malaysia, hence why it features in this novel, but I’m genuinely baffled at some of the ethnocultural and, more jarringly, geopolitical choices made here. Given how much poetic license was taken with so many of the core details of this book, I’m somewhat surprised that Patusan, the name the author gives to the Royal Malaysian Naval vessel that rescues Virginie and Jake—and also the name of a fictional Southeast Asian nation first popularized by Joseph Conrad—wasn’t chosen as the setting instead. An entirely fictional setting would certainly have taken me out of the narrative far less than the off-kilter details of this bizarro world Malaysia.

Of course, if you’re unfamiliar with the area, these oddities may do nothing to affect your reading enjoyment. Should you just be in the mood for a summer beach read thriller about terrible things happening to beautiful people who make poor choices in exotic locales, and if you’re not at all particular about verisimilitude, then this might very well be the book for you.