July 22, 2022
Loosely inspired by Agatha Christie's And Then There Were None, Seishi Yokomizo's Death on Gokumon Island is a fiendish, classic locked room murder mystery from one of Japan's greatest crime writers. Here's Doreen Sheridan's review! 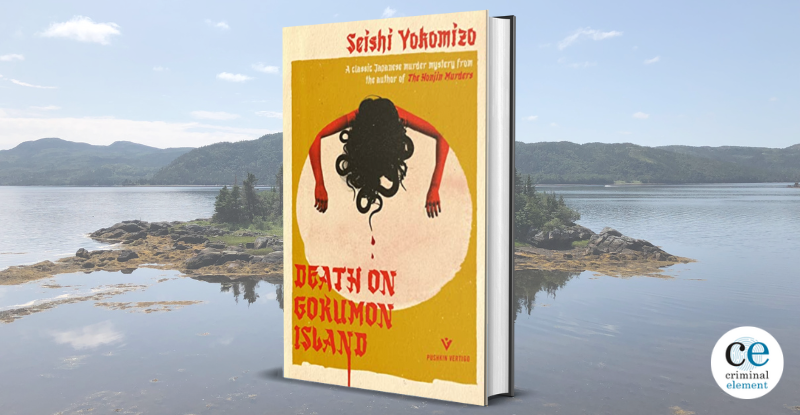 What a pleasure to finally have the words of Seishi Yokomizo translated into English! Louise Heal Kawai does a wonderful job of translating classic mystery novels, opening up an entirely new collection of books for non-Japanese-speaking fans of Golden Age traditional mysteries to enjoy.

Death On Gokumon Island opens as Japanese soldiers—including our hero Kosuke Kindaichi— are being repatriated from the various fronts of World War II. Kosuke had served in New Guinea with another young man named Chimata Kito. As the two became fast friends, Kosuke realized that Chimata’s fear of dying far exceeded the ordinary. Even Chimata’s joy at the war ending, signaling his ability to finally go home, seemed over the top, though Kosuke was happy enough to humor his friend in these otherwise harmless emotional swings.

Alas, while on the ship only five days out from Japan, Chimata’s recurring malaria and fever claimed him for good. On his deathbed, he made Kosuke promise to go to Gokumon Island in his stead, a vow Kosuke readily swore. As soon as he could, Kosuke headed to the small island located in the Seto Inland Sea. He knew that a community as isolated as Gokumon’s would likely tend toward the insular, but did not expect his tidings to have such an electrifying effect on the populace:

The news that Chimata Kito was dead had run like wildfire through the island community, and seemed to have stirred things up. Everyone seemed strangely on edge, their expressions unsettled. In the same way that experienced fishermen could smell the rainstorm coming from beyond black clouds way off on the horizon, people seemed to tremble in the shadow of some terrible fate.

Why was this? Why had the death of Chimata Kito stirred up such a panic on the island? What had put everyone on their guard? Kosuke was sure it was connected to Chimata’s dying words: “Please go to Gokumon Island in my place…save my sisters…my three sisters will be murdered…my cousin…my cousin…”

Kosuke had thought that Chimata’s words had been the frantic ravings of a man dying of fever, but the more time he spends on the island, the more he begins to fear that something truly is amiss. While the local authorities greet him cordially if solemnly given the circumstances, Chimata’s own household gives him pause. Chimata had become the de facto head of the Kito family after the death of his grandfather Kaemon, due to the madness of his own father Yosamatsu. His three half-sisters—Tsukiyo, Yukie and Hanako—are all still teenagers, so the household itself is run by their slightly older cousin, the capable Sanae, with occasional help from Kaemon’s former mistress Okatsu.

As it would be inappropriate in 1940s Japan for Kosuke to stay in a household of women unrelated to him, he’s given comfortable if spare lodgings at the temple next door. This gives him plenty of opportunity to observe his neighbors, if not outright watch over them, even as he tries to get a better idea of what threat the sisters face. His task is not made any easier by their unrelentingly frivolous behavior:

Kosuke Kindaichi had already observed for himself how peculiar the three sisters were. They’d been more concerned with their hairstyles and the way their obis were tied, than by their own brother’s death. During the priest’s solemn speech, they were giggling together, tugging at each other’s kimono sleeves, nudging each other with their elbows. This behavior appeared all the more inappropriate and abnormal coming as it did from three young women as outwardly beautiful as they were. Watching it had turned his stomach.

When one of the girls is finally murdered, Kosuke must not only admit to the truth of his friend’s concerns but also work to uncover the killer before any of the other girl’s lives are put at risk. After all, before he became a soldier, Kosuke had begun to develop quite a reputation as a private detective. But will he be able to save the remaining sisters? Or will he only be able to find them justice after death?

This was an intricately plotted murder mystery that really brings post-World War II Japan to life. Kosuke must deal with the consequences of his fellow soldier’s death, combatting with logic a killer hiding in a community that’s altogether too ready to lean into superstition and allow the sacrifice of three young girls. But for what purpose? The why is almost as fascinating as the how in this engaging fair play mystery. If you’re at all a fan of traditional mystery novels, and are ready to explore a terrain far removed from the usual Western setting and perspective (with the bonus of a detective native to the area), then you must check out this series.