Book Review: Death of a New American by Mariah Fredericks 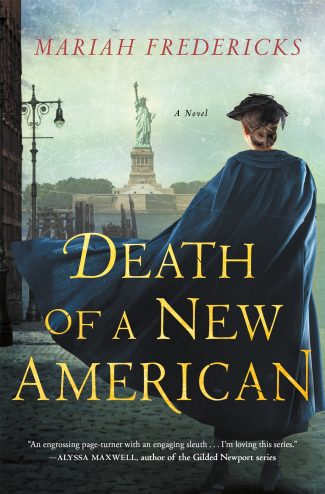 Death of a New American

Death of a New American by Mariah Fredericks is the atmospheric, compelling follow-up to the stunning debut A Death of No Importance, featuring series character, Jane Prescott.

For some reason, the first thing I understood was the open window, the curtain blowing wildly into the room. A lamp lay overturned on the floor, a little china dog in pieces nearby. The baby was on his stomach near the rocking chair, his little arms stiffly outstretched. His head was raised and there was… mess on his pajamas. The billowing curtains obscured and restored the moonlight, making it hard to judge. Gently, I picked him up and felt a wave of relief that he seemed to be whole. Just hysterical and exhausted.

But there was something damp on his romper. Sticky. Placing my fingers around the back of his head, crooning tunelessly, I became aware of the smell of copper. The floor felt wrong. The quiet whisper of carpet had given way to something ominously different: heavier, wetter. I forced my gaze around and down. And saw what I had, on some level, known I would find when I opened that door.

Half hidden behind the crib, Sofia on her side, arms akimbo, eyes staring. Her throat had been cut. Some of the blood had sprayed, spattering the walls and the white rails of the crib. The front of her nightgown was a slick of gore. The rest had soaked the rug where she fell…

One hand, I realized, had been stretched towards the baby, a last, pathetic attempt to reach him.

The victim: Sofia, Charles and Alva Tyler’s nanny. Since the beautiful young woman was Italian, the culprit seems obvious to everyone—surely this was the work of the Black Hand, the infamous Italian mafia that Charles Tyler has been so publicly fighting in New York.

Surely this was a kidnapping gone wrong; surely a criminal had attempted to steal the Tylers’ baby, been interrupted by Sofia, and killed her to escape.

But that obvious explanation doesn’t sit well with Jane, who can feel unsettling undercurrents at the Tylers’ mansion. What if Sofia herself had been the primary target. And if so, why?

With the assistance of newspaperman Michael Behan, Jane begins to dig into Sofia’s past. She may have only known the victim for a short time, but she refuses to let the sweet young woman be written off as “just another Italian” who somehow deserved her brutal end.

In a town boiling with anti-Italian sentiments, Jane has her work cut out for her.

…They had no money. No family to run to outside the city. They had made choices—or had them made for them—and now they were stuck. You are here, but you don’t belong. You are in between. Not here, not there. Nobody. I thought of her little room with its sealed window. No wonder she had come to the city at such risk, just to see someone who knew her, really knew her, to speak her language, feel like herself. And no wonder she had flirted with William. Just for a moment to feel free of the past, just a pretty girl with a life of possibility. Not a dirty Italian or an accomplice of the Black Hand or a dark-skinned agent of death. Just a nice woman who loved children and had dreams of seeing California.

Not a very exciting story, perhaps. No one would want to read about it…

At first blush, the core mystery of Death of a New American is a small, straightforward one. But by the final page, Fredericks has revealed a surprisingly complex explanation for just what happened in that tower nursery. Sofia’s death is even more tragic than it initially seems.

In the pages leading up to that reveal, heroine Jane negotiates two of the most dramatic events in American history—the sinking of the Titanic and the New York march of over 20,000 supporters for women’s suffrage—as well as the high-society marriage of her employer. Fredericks paints these evocative happenings with an assured, delicate hand, making this as much a historical novel as a murder mystery.

Plenty of space is devoted to America’s cruel bigotry—a constant regardless of the time period; only the faces change—the narrow options available to women of the time, and the strengths and weakness of both sexes. As Jane discovers, unbending strength can be just as devastating and destructive as a weak will.

Finally, I said, “Think of the arrogance of the Titanic, the hubris of the men who built it. They think, What we have made is so colossal, so magnificent, it defies nature. We have no need of lifeboats, the ocean cannot best us.” I thought of Alexander Cassatt blasting his way through the riverbed. “It is splendid, this arrogance, it takes us forward. But it’s also ignorant. It won’t tolerate weakness. And when nature—human or otherwise—does not comply, it can be savage.”

“But this isn’t the story of a ship,” said Behan gently.

“No, it’s the story of a woman. And children. And birth. Those soft, foolish things—of no concern to anyone of consequence.”

Jane is a compelling, forthright narrator. Her unorthodox background and friendships give her a clearer-eyed perspective than many around her, and though she harbors some scandalous opinions (that Italians are the same as any other group, for example, or that free love may not be a bad idea), she’s still very much a product of her time. She knows her place as a domestic servant, and she’s pragmatic about arranging things—like an appropriate marriage—to best suit her employer.

Death of a New American’s greatest strength, however, lies in how effortless a read it is. Too often with historically-set stories, the plot bogs down in details and facts; so many authors feel the need to impress their audiences with their scholarship, or have a hard time paring down their research. Not so here.

Fredericks clearly knows her setting, but never lets it overwhelm her characters, keeping the pace quick and the prose light even when touching upon heavy topics. It takes real skill to craft a story that has substantial meat on its bones and yet can be devoured in only a sitting or two, and Death of a New American proves Fredericks has that knack.  It’s a thoroughly enjoyable read from prologue to epilogue.

Check out our review of A Death of No Importance, the first novel in the Jane Prescott Mystery series.