Book Review: Death of a Messenger by Robert McCaw 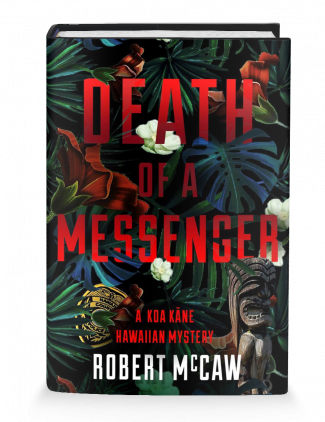 Death of a Messenger

In Robert McCaw’s Death of a Messenger, Detective Koa Kane finds a severely mutilated corpse and will stop at nothing to get to the bottom of this gruesome—and perhaps ritualistic—murder.

Hawaii may be the 50th State admitted to the U.S.A., but it may as well be another country based on how different the culture is there. It is this fact that author Robert McCaw uses to his advantage with his Koa Kane Hawaiian Mystery series. Death of a Messenger is the third novel in this series and both the exotic locale and native rituals make it a unique and interesting read.

As the story begins, a badly brutalized and unidentified corpse is found inside a funnel tube left by a currently dormant volcano. Koa admits that the remains are worse than anything he has previously witnessed—and he has not only been a police Detective but also a military veteran. One of the stark limitations of policing on a small island is the lack of quality medical assistance. In this case, there is no true medical examiner and Koa must rely on the aid of a 75-year-old Japanese obstetrician named Shizuo. In addition to Shizuo’s lack of practical M.E. experience, he is also a very abrasive personality who does not care for either the military that occupies the island.

Shizuo is in no rush to work on the case even though the body was found on military land and they want answers. He writes it off as a ritual killing and says he will get back to Koa with any other findings. Koa continues to speak with both the military as well as other locals who are up on Hawaiian ritual killing. A gruesome detail he picks up on is that the left eye being gouged symbolizes that the victim broke an ancient kapu (law/custom) and was most likely intended as a warning to others. Koa takes this information and feels it is indicative of the fact that the deceased may have been seeking some sort of archaeological find and was murdered as a result—even though it is obvious he was killed elsewhere and placed in this obscure location.

Koa soon learns that the body may be that of a 29-year-old man named Keneke Nakano who had been reported missing. Nakano worked for the Alice Observatories in the role of astronomer. Now, Koa must shift gears to focus on an archaeological find of astronomic proportions that would have interested the young Mr. Nakano. The fact that the body may have been dragged sixty miles from the murder site means the killer was either stupid or had a specific intention in placing it where they did. For Koa, it is just the tip of the iceberg in a case that will involve not only astronomy and treasure-hunting, but possibly a high-tech secret that has put him in the crosshairs of some dangerous archeological thieves who will stop at nothing to keep their secret safe.

Death of a Messenger is full of tension and history which should appeal to not only fans of murder mystery and police procedural but also fans of authors such as Preston & Child will eat up!