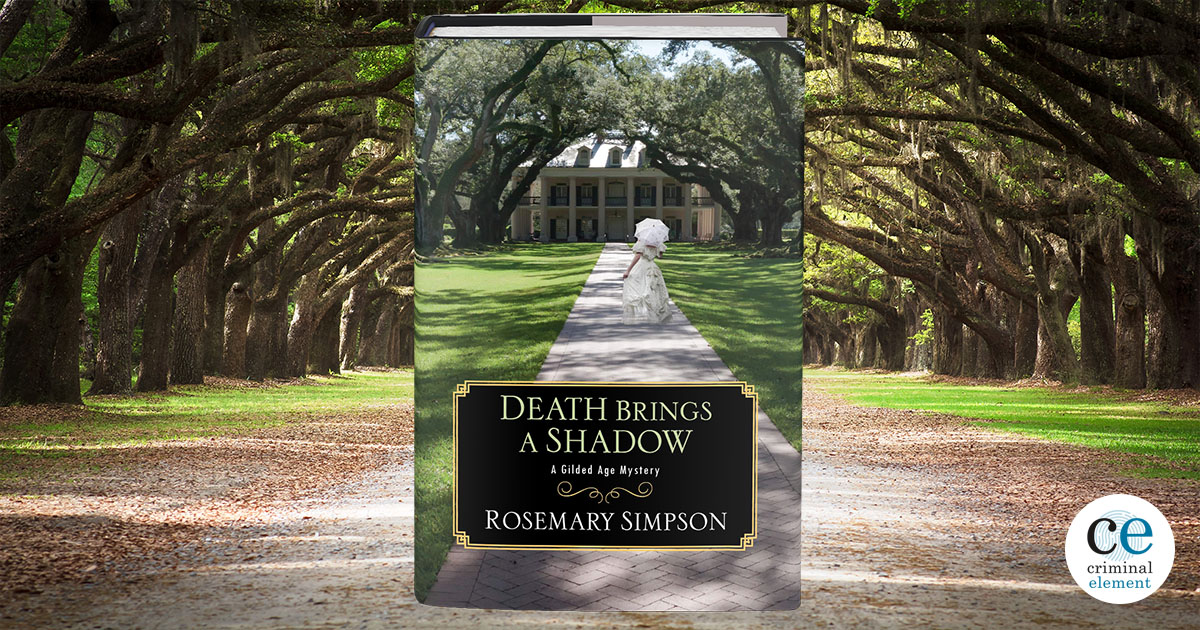 Prudence is to serve as maid of honor to her good friend Eleanor Dickson at an opulent wedding that will unite the extremely wealthy (and Yankee) Dickson family with the Bennetts, Southern aristocrats fallen on hard times in the wake of the Civil War.

Eleanor deeply cares for her fiancé, Teddy Bennett, and the affection certainly seems to be mutual despite their vastly different cultural backgrounds. Miss Dickson is one of those lucky few ladies of society who will marry for love.

Eleanor stopped abruptly, then turned and grasped Prudence’s arm with fingers that gripped convulsively. “This is why I brought you out here,” she said, her voice trembling on the brink of panic. “Do you feel it, Prudence?”

“Eyes watching us. From somewhere deep among the trees. I’ve tried to find whoever it is, but I’ve never been able to see anyone. The undergrowth is too dense.”

“Neither do I. Not really. But whenever I’m here, I can’t shake the feeling that I’m being watched. It’s happened more than once. At first, I thought it was my imagination, so I tried to ignore it. But this past winter, after Teddy and I began spending time together, the feeling grew much stronger. It frightened me.”

“Please tell me you feel it, Prudence. Please tell me I’m not letting my nerves or pre-wedding jitters get the best of me…Something or someone on this island doesn’t want me here.”

Prudence wishes she could dismiss Eleanor’s fears, for her friend’s sake. This should be a joyful time.

But, tragically, they aren’t simple pre-wedding jitters after all. Two days before the wedding, the bride is found drowned in the swamp. And evidence suggests her death was no mere accident, setting Prudence and Geoffrey on a deeply disturbing quest for the truth—and justice for their friend.

A quest that soon involves Voodoo witchcraft and shameful family secrets that only lead to more death and evil. Prudence finds their search for answers blocked at nearly every turn by misogynists who expect women to know their place:

“Whether or not I read novels had nothing to do with the circumstances of Miss Dickson’s death.” Prudence’s voice trembled with suppressed rage at the implied insult to her intelligence.

“It’s just that some of you ladies let your imaginations run wild. I’ve confined my wife’s reading to the Bible and Pilgrim’s Progress. The same for my daughters,” the coroner informed her smugly.

However, misogyny isn’t the only issue Prudence must battle. The War was nearly thirty years ago and reconstruction has come and gone. African-Americans are now legally free. Yet slavery hasn’t truly ended on Bradford Island. The overt trappings have merely gone underground, re-emerging as the Ku Klux Klan and lynch mobs. The former masters still rule with an iron fist, and the black inhabitants live in very real daily fear.

If Prudence and Geoffrey want to find the one responsible for Eleanor Dickson’s death, they’ll have to face destructive truths about the South, Bradford Island, and themselves.

Death Brings a Shadow is as far from a cozy mystery as you can get. It may be set in the Gilded Age and star an independent, outspoken heroine who defies the conventions of her time, but it’s a story full of terrible sadness and nauseating injustice. Simpson, brutally true to history, spares none of the violent, disgusting, and reprehensible details of the post-Reconstruction South. Shadow is peopled with characters that embody the full evils of racism, and the story can, at times, be almost too painful to watch unfold.

These sorts of stories need to be told, though, lest we forget the full barbarism of the crimes of the not-so-distant past. We can’t turn a blind eye to the truth and Simpson does a fine job of drawing us into her venomous setting. Putting us into the shoes of her characters, she makes us confront some hard, miserable facts about slavery and the wide, bloody gulf of lasting discrimination it created.

Simpson also never lets us forget how tragic Eleanor’s death is. Though we spend only a few pages with the young woman prior to her drowning, Prudence frequently reflects on her kindness and friendship, making us care deeply for the innocent victim at the heart of the plot.

Frequently, the dead in mysteries are left vague and faceless. Authors give us a few broad strokes to make us want to see the killer found and justice served. Beyond that victims are often background dressing, a plot point that drives the heroes into action rather than full characters in their own right. We can forget them and get caught up in the excitement or intrigue of the wider story.

Not so here. Simpson makes Eleanor’s death hurt, and the more details that are revealed, the more tragic her demise becomes. It’s not often that I cry for a murder victim in a whodunit but Simpson is that rare mystery writer who humanizes and develops even the unfortunate dead and Shadow is a mystery overflowing with poignant regret and inequality.

So, be advised: this isn’t a novel for the faint of heart.

It is, however, brimming with vivid prose and nail-biting menace, colorful characters and evocative dialogue, and a sense of place so real you can almost feel the mosquitoes on your neck. Death Brings a Shadow is a powerful antidote to fiction that overly romanticizes plantations and the Southern aristocracy for those of us interested in compelling mysteries built around stark, unvarnished truth.