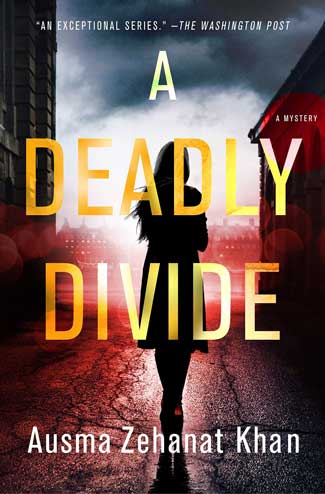 Esa Khattak and Rachel Getty, detectives with Canada’s Community Policing Section, are called in to the most violent crime scene they’ve ever attended—the shooting of worshippers in a mosque in the small Quebec town of Saint-Isidore-du-Lac. This is the first time that Toronto-based Community Policing has been summoned to the province, but it quickly becomes clear that their role as mediators between law enforcement and minority communities is desperately needed there.

Tensions have come to a violent head between the small Muslim community and the pure laine, or white supremacist, Quebeckers who resent their presence. In addition to helping manage the public response to this crisis, Esa and Rachel find themselves investigating not only the shooting but also the local law enforcement’s curiously muted reaction to a long string of threats and petty crimes targeting the town’s religious minorities. This, of course, has riled up not only the local Muslim population but also national civil liberties associations, such as the one headed by Diana Shehadeh, an old friend and present antagonist to Esa and his team:

“Just whose side are you on?” she asked moodily.

Esa suppressed a sigh. These were the kinds of comments he loathed. A construction of binaries, where people were either with you or against you, with no common ground in between. He’d hoped that a leader of Diana Shehadeh’s caliber would be well past these questions by now.

But any response he made along these lines was bound to sound condescending.

He spoke cautiously, hoping she’d hear his undertone of humor. “I’m on no one’s side. I am for justice—no matter who it’s for or against.”

Diana had been asked the same question about her loyalties during a now-infamous parliamentary debate. Khattak had just quoted back Diana’s indignant response.

A case like this would ordinarily test Esa’s fabled grace under pressure, but there are even greater complications at hand. Alizah Siddiqui, the younger sister of a murder victim in a case Esa and Rachel had previously solved together, is a prominent local activist, and her relationship with Esa puts a strain not only on the investigation but also on Esa’s tentative new relationship with his maybe-fiancée, Sehr. Even matter-of-fact Rachel finds herself thrown for an emotional loop by the Surete du Quebec homicide detective in charge of the investigation. To her dismay, Rachel finds herself falling under Christian Lemaire’s spell, a definite distraction from her efforts to root out Nazi sympathizers within Saint-Isidore-du-Lac’s police structure.

I, too, found myself distracted by all the romantic shenanigans, but I did very much enjoy not only the layered mysteries—with the promise of a greater one to be investigated in the next installment of the series—but also the nuanced and intelligent way that current sociopolitical events are examined and handled through the fictional lens. Ausma Zehanat Khan does not shy away from tackling the tough subjects facing Muslims both in Canada and globally, and her latest novel meditates with eloquent thought and heart on the recent real-life shooting massacre in a Canadian mosque.

I also enjoyed her depictions of Islam, which I’m still learning are of a multitude depending on the school of jurisprudence one follows (and I say this as a product of a Shafi’i upbringing myself). It’s fascinating to see the different cultural and intellectual influences that shape the practices of religion alongside beautifully written descriptions of experiences universal to all Muslims, as here when Esa, tired of needing to wear the masks demanded by his professional and personal lives, is at a religious vigil:

He was invited to lead the prayer. Instead, he chose to give the call to prayer, cupping a hand to his ear. He did this for a reason. It was an assertion of who he was, both publicly and privately. The families would hear him call out the adhan with the grace of a thousand past recitations and they would know who he was. But in shaping the Arabic words into their centuries-old rhythm, Esa would also be speaking to himself.

Accepting himself, the mask set aside for now.

The adhan wasn’t quite a song, nor was it a chant. Its recitation was something measured in between, an offering of grace to the heart. When he’d finished, he turned to take his place among the rows of the faithful[.]

A Deadly Divide is both a celebration of modern Islamic community and a timely look at anti-Muslim bigotry and the structures that allow it to flourish. It also paves the way for a case where Esa is both target and investigator, a situation that I’m greatly looking forward to reading—and solving with our investigative duo—in the next book of this terrific series!