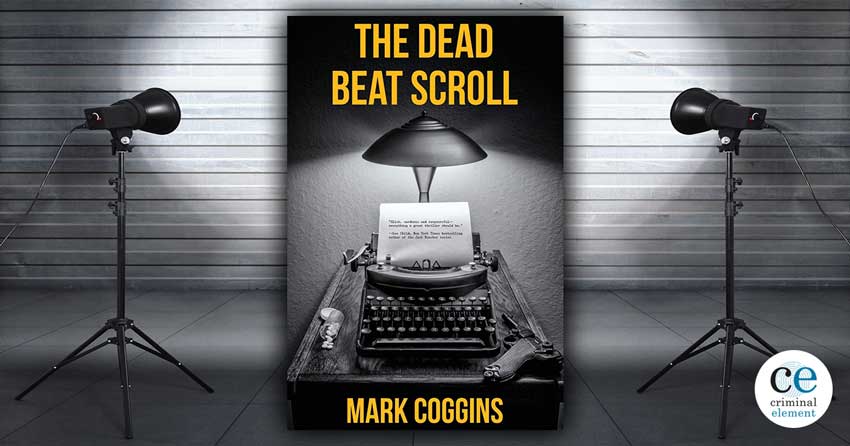 The Dead Beat Scroll by Mark Coggins is the seventh book in the August Riordan series, where Riordan must work with old allies and enemies to untangle the case before time runs out.

The Dead Beat Scroll owes a great deal to Humphrey Bogart’s famous film noir, The Maltese Falcon. It is set in contemporary San Francisco, but private detective August Riordan is old-school and set in his ways. His loner techniques have served him well professionally. Riordan hasn’t lived in San Francisco for five years, but his former fiancée/secretary, Gretchen, summons him back to track down Chris Duckworth for her. Chris being Riordan’s “best friend and sometime assistant.”

After Riordan left the City by the Bay, Duckworth moved into Riordan’s apartment “on the corner of Post and Hyde.” Each chapter of The Dead Beat Scroll opens with a black and white photograph of old Bay Area buildings, locales, and vistas. It’s a clever way for those not familiar with the scene to visualize the plot.

Riordan crashes at Chris’s place after he gets back to town. A phone call wakes him up.

The blurry characters told me three things: I was still drunk. It was two twenty-three in the morning. And someone with a 415 number I didn’t recognize was calling.

I swiped my finger over the touchscreen to answer. “Riordan,” I tried to say, but it came out like a sea lion clearing phlegm.

Kittredge. Lieutenant “Smiling Jack” Kittredge. That showboating asshole from SFPD Homicide was at least part of the reason I’d thrown in the towel on my PI business and left the city.

Kittredge tells Riordan to meet him at a crime scene: “a rub-and-tug place called Golden Fingers.” Kittredge knows why Riordan came back to town and tells him to get there right away. Coggins’s terse, ironically wry style suits the late-night conversation. Riordan pushes back.

“But if you know why I’m back, you know that doesn’t make any sense. Duckworth wouldn’t be caught dead in a place like that.”

There was a long pause. “You’re going to regret saying that.”

The heaviness of the late-night atmosphere matches Riordan’s mood: “A thick mist hung in the air, making the walk up the hill toward the massage parlor feel like wading through applesauce.” Why is he walking anyway? “It was less than three-quarters of a mile, so calling a cab or an Uber would have taken more time than it was worth—especially since I didn’t know how the hell to summon an Uber.” Luddites, Riordan’s constant struggles with technology and communication and even clothing, are a delight.

Chris is dead, ergo Riordan’s mission is to “avenge the death of his friend.” Kittredge asks him for details. Why did Gretchen reach out?

“What was he working on?”

Kittredge pointed a gloved finger at me. “Homicide is police business. You find out anything about what he was working on or where he was, you bring it to me. No vigilante stuff, Riordan. I know you were involved in the massacre of those Argentines even if the DA couldn’t pin it on you. You try to avenge Duckworth’s murder, and I’ll wreck you.”

Too late, thinks Riordan, “there’s nothing left to wreck.”

Riordan is an old soul, and one might think he’s not up to snuff. Wingtip shoes notwithstanding, he fits the gumshoe mode—a slang term from the early 1900s that marked a fellow who “sneaks around quietly as if wearing gumshoes.” The stealthy, silent approach meant that criminals didn’t know they were under surveillance. But Gretchen—revealed five years later to be Chris’s full partner (not secretary/not admin assistant)—informs Riordan that their business model had changed considerably.

“Chris wasn’t doing the kind of work you did, August. Most of his cases involved computers—cybersecurity, identity theft, and online reputation. He trained me to help him, and we rarely left the office. Keyboard and phone replaced shoe leather and muscle. And it was a lot more lucrative. The rent wasn’t a problem.”

But August has his own methodology of working a case. When he asks Gretchen if a case could have “blown back on Chris or the firm,” she’s already there.

She pushed a manila folder across the desk toward me. “I figured you were going to ask, so I printed out the file. To answer your question, no, the client was happy with the resolution …”

But Gretchen expects Riordan to follow every thread—and she knows he won’t take any conclusion at face value. The body count is considerable in The Dead Beat Scroll, but there’s a quiet certainty that August Riordan is the man to avenge Chris Duckworth’s death; Riordan is relentless. And, in keeping with the San Francisco setting, the “new” Maltese Falcon—the object that leaves bodies in its wake—is “a previously unknown manuscript from dead Beat writer Jack Kerouac.” How very in keeping with the Bay area!