July 20, 2020
In this debut novel by Katie Tallo, a young woman haunted by her tragic past returns to her hometown only to discover that there might be more to her police detective mother’s death than meets the eye. 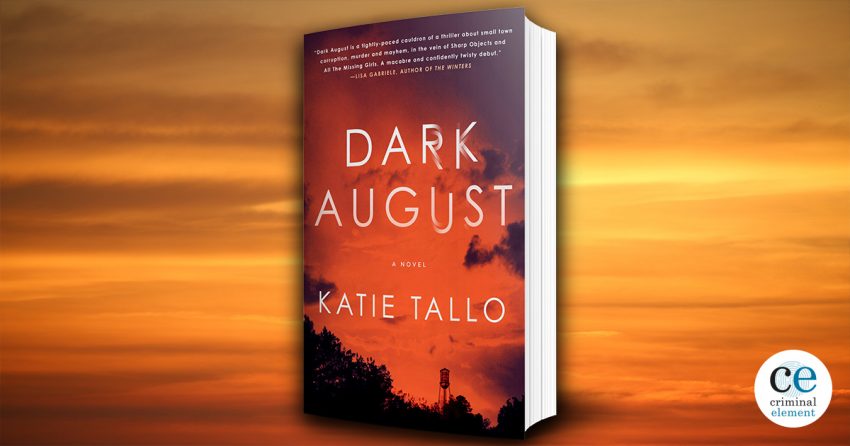 Following a career as an award-winning screenwriter and director for the past two decades, Katie Tallo of Ottawa, Ontario, Canada, decided she wanted to write a novel. The end result is a complex, character-driven thriller she has aptly titled Dark August. The protagonist in this saga is Augusta ‘Gus’ Monet, a young woman who is going to go back to where her family started and along the way will upturn some rocks and find closets full of skeletons she means to shake up.

Gus finds that her life is going pretty much nowhere. She spends much useless time with her grifter of a boyfriend, Lars, and seems to have let all of her own dreams slowly die away. That is until she gets notice that her last living relative, her great-grandmother, has passed away. The story actually starts with a look into the future, ten weeks after Gus gets the sad news about great-grandma. She approaches a mansion that she knew as Halladay House and it’s where Kep Halladay lived. Gus is there with a can of gasoline and she intends on burning Halladay House to the ground. The novel takes off from there, set ten weeks earlier, as we see what events occurred that brought Gus to the point of becoming a major arsonist.

Gus decides to leave in the middle of the night without telling Lars and heads off to the small Canadian town where she grew up. Her mother, Detective Shannon Monet, was killed in a car accident when Gus was just eight. That left her to Great-Grammie Rose to raise her, along with her Brazilian nurse, Miss Santos. Gus was sent to St. Catherine’s boarding school when she was ten in the hope of making her a fine young woman and not have her under-foot of her ailing great grandmother. It was Miss Santos who sends the abrupt note to Gus about the passing and requests that she comes home at once. Upon arriving there, she finds that Miss Santos merely wanted to get as far away as possible and leave the house and whatever estate was attached to it for Gus to sort out. After meeting with her great grandmother’s attorney she finds that everything was left to her, which made Miss Santos quite upset and eager to leave in a cloud of betrayal.

Being normally snoopy and curious, Gus explores the entire house looking through everything without realizing that some doors should not be opened. Her only companion through all of this is Levi, the old dog who she last saw when he was but a pup. She also finds out why Rose did not have much by way of a bank account as she literally kept her money in a mattress — tens of thousands of dollars worth! Gus was not excited about what she saw as an impromptu treasure hunt. Her searching digs up information about her mother’s death. Gus learns that it was not as simple as it was made out to be when she was just eight-years-old and is still considered a warm, if not totally cold case with the local police. She is particularly intrigued by the news clipping about a 23-year-old named June Halladay who happened to die in a car accident the very same day as her mother was killed — and both in the small town of Elgin.

Further digging shows that wealthy local politician, Kep Halladay, also died on this same day, a fact she verified by inspecting their tombstones in the local cemetery. Gus is more than a little bit curious now and becomes obsessed with finding out the truth behind her mother’s death and whatever connection there was to the Halladay family. She will find out under different circumstances that some doors still should not be opened. Dark August is an interesting read with a protagonist you will find hard not to root for. It is great to learn how things get from Gus heading back to her hometown to ten weeks later preparing to burn down an old mansion. A fine debut from novelist Katie Tallo, marking her as someone to watch for in the future.