Book Review: Dachshund through the Snow by David Rosenfelt

October 8, 2019
In Dachshund through the Snow, the 20th book in David Rosenfelt's Andy Carpenter series, it's Christmas and lawyer Andy Carpenter and his golden retriever, Tara, can't say no to helping young Danny and his dachshund, Murphy. 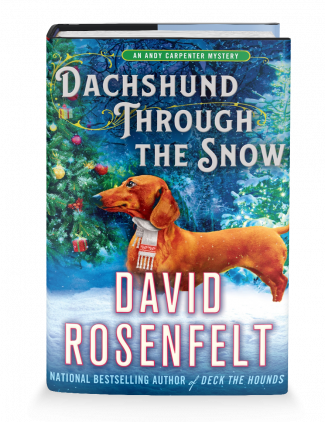 Dachshund through the Snow

I honestly don’t know how David Rosenfelt does it. He puts out two to three mysteries a year and each one is terrific. I should know: I’ve read five of the six books he’s published since mid-2017 as they came out and each is an intelligent, hilarious page-turner. This twentieth book in the Andy Carpenter series continues that winning streak with another twisty, humor-laced tale.

Once again, dog-loving defense attorney Andy is wistfully contemplating retirement while his wife, Laurie, is getting a head start on her favorite holiday, Christmas. Where she used to wait till after Thanksgiving was over, this year she’s decided to begin the Christmas spirit immediately after Halloween, by asking the post office and local retailers for children’s wish lists to fulfill. It’s one such list that has her pulling Andy back from the brink of swearing off lawyering for good.

The writer of the list is Danny Traynor, a young boy who wants Santa to bring a long sweater for his dachshund Murphy and a new coat for his mom, as well as to find his dad and bring him home. Laurie can do the first two easily and, being a former police lieutenant turned investigator for Andy’s practice, thinks she can do her best with that last as well. But the cops beat her to it, finding Noah Traynor where he’s been hiding out and arresting him for the thirteen-year-old murder of Kristen McNeil.

Noah insists he’s innocent, which is where Andy comes in. Bound by her Christmas spirit promise to bring Noah home, Laurie persuades Andy to take up his defense, even though all signs point to his guilt. But as Andy, Laurie and their team begin to investigate, they discover that Kristen was caught up in a criminal conspiracy so complex that even now, over a decade on, someone will kill to keep the truth buried.

Which, of course, doesn’t mean that Noah didn’t kill her: the DNA evidence is incontrovertible. This was one of the few Andy Carpenter thrillers where the innocence of the defendant was in serious doubt from the get-go, which only added another layer of tension to the already dramatic proceedings.

Fortunately, that sense of uncertainty is missing from the other case Andy is tasked with handling here, where a police officer on the actual verge of retirement hires Andy to petition on behalf of his K-9 partner, Simon. The German Shepherd is a year away from retirement himself, but Sergeant Corey Douglas wants to sue the Paterson Police Department to let them leave together, on account of Simon’s worsening arthritis. He’s gone through all the usual channels and been denied, and has turned to Andy out of desperation, as the two have a somewhat unpleasant history together. Andy is sufficiently incensed at Simon’s plight to overlook any animosity, telling his law partner:

“He’s an employee; he’s a cop. He has spent his life protecting your arthritis-ridden body. If he was human they would be reacting differently; they’d give him a gold watch, and an early retirement with a pension.”

“What are you saying? That they’re discriminating against him because he’s a dog?”

As always, Andy’s brilliant legal maneuvering and persuasive courtroom rhetoric are on full display as he navigates both cases. But it’s really his investigative work that shines in this installment, as he and his team race against time to uncover the truth behind Kristen’s murder. Sometimes, that means putting themselves in disagreeable positions, as when Andy and Laurie must break into the room of a man connected to the case:

She hands me a pair of skin tight rubber gloves and puts a pair on herself. She seems a bit uncomfortable; this kind of subterfuge is not really consistent with her cop’s training. I doubt she’s ever searched a room without getting a warrant.

We go through the entire room, which is not difficult or time-consuming, because he traveled very lightly. Just some clothes, and not much else, certainly not anything interesting. He also has two books on the night table, including a thriller by David Rosenfelt, who I hear is terrific. I’m tempted to grab it, but I don’t.

Ordinarily, I’d find that kind of self-regard obnoxious, but Mr. Rosenfelt has definitely earned the right to name check himself, especially given that this is the milestone twentieth book in a series well known for self-deprecating humor. It doesn’t rest on its laurels either, pointing an intriguing way forward for the series as Laurie makes an important decision about her future. I can’t wait to read more, so here’s to at least another twenty of these entirely charming, always well-written mysteries!