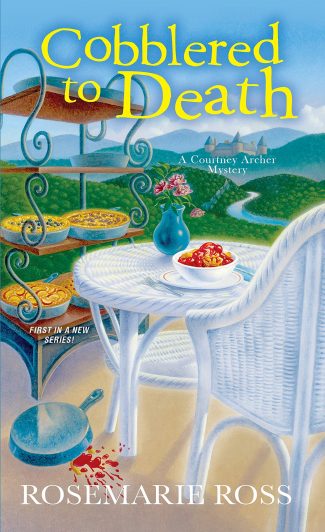 The debut novel in the Courtney Archer Series, Cobblered to Death follows the host of a popular reality cooking show as she tries to clear her name of a gruesome murder while hiding the secret of her success.

Courtney Archer is a fraud. Completely by accident, of course: back when she and her producer, Eric Iverson, were fresh out of college, they had dreamed up the idea of a TV show to showcase her culinary skills, giving it his country background despite her being a city girl through and through. When their show was picked up, they naively believed that the country girl persona the network demanded would affect only her on-screen appearance. They did not account for public opinion taking the idea to heart and assuming that Courtney was the real deal.

Uncomfortable with deceiving her significant number of fans, Courtney has accepted a gig hosting a brand new TV show called The American Baking Battle. She hopes that this role will help her start to develop a more authentic image, especially since the show eschews the manufactured drama and rivalries of other reality competitions. Unfortunately, even her new colleagues have bought into the marketing, and Courtney’s contract means she can’t afford to enlighten them as to the truth, even when it makes for uncomfortable situations, such as when some of them go fishing together at breakfast:

“Wow, these are good ones.” Shannon held out a wiggling worm, then started to bait her hook.

I choked and turned away, forcing down my bite [of protein bar].

“Are you okay?” Concern filled Shannon’s voice. “You act like you’ve never seen a hook baited before. Didn’t y’all have a lake or river close to your farm for fishing?”

Um… no, because I didn’t grow up on a farm. There was a river in my town that probably had fish in it. The closest I came to the Chicago River, though, was on Saint Patrick’s Day, to see the dyed-green water or to drive over a bridge.

In addition to her hosting duties and round-the-clock deception, Courtney also has to continue taping for the show that launched her career, Cooking With The Farmer’s Daughter. Juggling all this would be tough enough, but then a contestant is whacked, both literally and figuratively, with a cast-iron skillet she’d baked a cherry cobbler in. Given that her fingerprints are the only ones on the pan, Courtney automatically becomes the prime suspect. It doesn’t help that the contestant, Mick Henderson, was a creep who’d been insinuating that he knew her secret.

Courtney’s efforts to investigate and clear her name, coupled with trying to resolve her professional crisis, make for very entertaining reading. There’s also an interesting twist on the love triangle in this plot. I was quite taken with the reality show aspect of the narrative as well. My lovely assistant Karin (whose name those of you who follow my Cooking The Books column here might recognize) is a huge fan of the reality baking competition The Great British Bake-Off and is constantly regaling me with tales from it. Reading Rosemarie Ross’s depiction of her fictional reality show felt reminiscent of my chats with Karin, with the added bonus of dramatic peeks behind-the-scenes, as here where a contestant sabotages her own efforts:

Rhonda dumped pancake ingredients into her blender and pushed the button. She and I stepped back so the cameraman could get a good shot. She whispered, “I don’t like being here since there was a murder. I’m trying to fail on purpose. I want to go home. I used too much salt in my challenge this morning for the same reason.”

I cringed at her confession and wished she hadn’t chosen me as her confidante. As a host, I had an obligation to the show and would have to tell [director and producer] Brendan before tomorrow’s filming.

This is a promising debut for the Courtney Archer series, and I’m interested to see where Ross will take it next. Quite literally: this book is set on the Poconos set of The American Baking Battle but Courtney lives and films in Chicago, which could make the love triangle in the book even more interesting than it already is. Hopefully, all these questions and more will be answered in the next installment of the series!