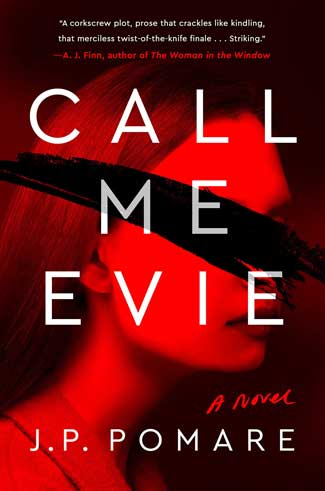 A 17-year-old struggles to remember the tragic night that changed her life forever in J. P. Pomare’s twist-filled debut novel of psychological suspense, Call Me Evie.

Kate knows that something is wrong with her way of life. For one, the man calling himself her Uncle Jim is definitely not her uncle. For another, he insists that she call herself Evie. Problem is Kate doesn’t remember very much of her life before she wound up in this remote house in the wilds of New Zealand with only Jim for company. She knows that she was a normal teenage girl in Melbourne once and that something terrible happened there from which she and Jim ran, but the details grow fuzzy the harder she tries to latch onto them. Jim is trying to help her remember—or so he claims. But as she pieces her past back together, she discovers that there is little in her present that she can believe.

Call Me Evie is one of those psychological thrillers that is hard to discuss for fear of giving away one of the many plot twists. It’s safe to say that 17-year-old Kate is a damaged young woman and that, at one point, she was madly in love with a young man named Thom, who probably didn’t deserve the kind of devotion she had to offer. Her relationship was sadly typical of too many teenage relationships, where neither party knows how to adequately deal with their emotions and desires, with one side demanding too much and the other expecting too little. J. P. Pomare does a terrific job of looking critically at the way heterosexual teenage relationships exert pressure on the girl, especially, to provide the emotional labor of keeping the peace, as Kate reflects on her tempestuous relationship with Thom:

I felt bad, like it was my fault and I should somehow be different. And that’s how they get you, boys like Thom. The obligation to protect them from their insecurities by conceding, bending[.]

That afternoon we’d had our first fight. I could tell he was embarrassed by what I’d seen and that his embarrassment made him angry. He told me never to go through his things again. He said if I did, we would be through. I cried and he didn’t apologize, but eventually we swept that episode aside, never mentioning it again.

Mr. Pomare not only presents these situations with forthrightness and compassion but also writes some truly lyrical, almost hallucinatory, passages, particularly when Kate is feeling introspective. Early on in the novel, Jim shaves Kate’s head after a botched haircut. Kate’s shorn scalp fascinates her, in an extended metaphor for the life of secrets she’s trying to unravel:

You can never know the shape of your skull, not until you have peeled the hair away. Even then the skin, the shadows and light, marks and spots, can obscure the bone that lies beneath. Seeing it isn’t enough because as with anything what you see is not necessarily all there is. I almost don’t trust my eyes. It’s possible the cord stretching to my brain is knotted, or my brain may have a short-circuited connection or snapped synapse. I see only my skull.

While Kate is a sympathetic figure, she also suspects that she’s somehow complicit in everything that happened to get her to New Zealand. Even as she plots to return to Australia, even as she begins to believe that everyone in the remote town she lives near is involved in a conspiracy against her, she can’t help but wonder how culpable she is in Jim’s deception, how many of his lies she wants to believe and even encourage. As the past catches up to them, as Kate’s memories begin to return, she finds that Jim is desperately trying to rewrite their history, even as all she wants is to go back to the way things used to be.

This slow burn of a novel provokes a lot of thought as to the lengths we’ll go to for the ones we love—or think we love—and what happens when that love goes awry. It’s a convincing portrait of teenage uncertainty and instability writ large, and it’s a worthy addition to the ranks of today’s popular psychological thrillers with memorable, flawed protagonists.