August 6, 2021
From bestselling Japanese author Kotaro Isaka and translated by Sam Malissa, Bullet Train is a dark, satirical thriller that follows the perilous train ride of five highly motivated assassins—soon to be a major film from Sony. 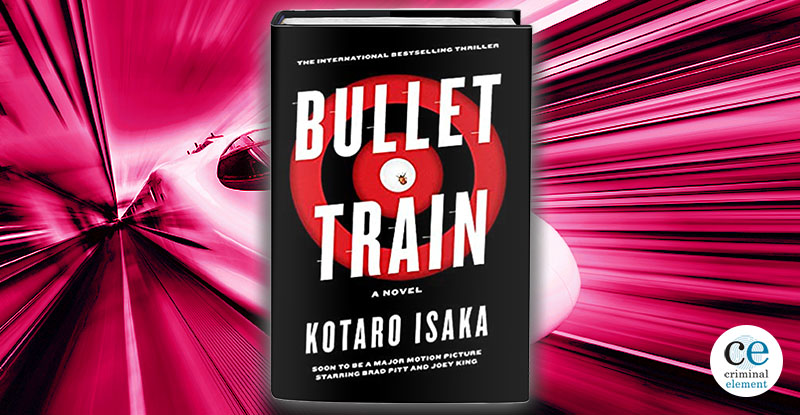 This dark, witty tale of five assassins on the same bullet train has already been turned into a forthcoming film, with Brad Pitt leading a stellar cast. It’s easy to see why! Translated from the Japanese by Sam Malissa, this novel’s frenetic energy brings to mind the best of modern crime cinema, with multiple points of view going back and forth in time to bring us a solidly entertaining, astonishingly clever tale.

We open on our first assassin, Kimura, who’s come aboard the bullet train headed from Tokyo to its final destination in Morioka, over three hours away. He’s intent on finding and punishing the teenager who had his son Wataru pushed from the roof of a department store. This teenager, known throughout the narrative as The Prince, is a sociopathic chaos agent. Only fourteen years old, his understanding of human nature is far greater than his age would belie, as evidenced by the thoughts displayed in his school book report on the Rwandan genocide:

The Prince understood it like this: when people have a difficult decision to make, one that may go against their code of ethics, they conform to the group, and even come to believe that the answer is correct.

When he thought about it in those terms, it became easy to see the mechanism by which the genocide not only was difficult to stop but by which it fuelled itself. The people doing the killing didn’t trust their own judgement, but rather went along with the group, believing that was right.

Profound stuff, especially in the age of conspiracy theories and vaccine deniers. Our other assassins aren’t quite as deep or devious, though literature-loving Tangerine could give The Prince a run for his money. Tangerine, however, is too often preoccupied with handling his flaky partner Lemon, whose gift for violence is almost as strong as his obsession with Thomas the Tank Engine. While their attempts at serious conversation can be frustrating for them both, they work well together most of the time, and are looking forward to the relatively easy task of escorting a gang boss’ son home after rescuing the kid from a kidnapping.

The fifth assassin is Nanao a.k.a. Ladybug, whose bad luck is legendary in criminal circles. His handler, Maria, has actually contracted him to do what ought to be the simplest and least violent of all the jobs on the train: pick up a suitcase after boarding in Tokyo, then disembark with it at the very next stop. But misfortune keeps him from leaving the train, stop after stop, as he and the other assassins slowly learn that their missions are all somehow intertwined.

The many twisty layers of mystery and violence are a total thrill ride as the five assassins attempt to outwit, manipulate and escape one another, all while frantically trying to communicate—or sometimes avoid communicating—with friends and foes outside the train. The dialog is snappy and the characters each well-defined, with very different perspectives and ideas, as here where Maria is trying to help Nanao figure out over the phone what to do with an unexpected corpse:

‘Don’t speak ill of the dead,’ she says earnestly. ‘You didn’t need to kill him, you know.’

‘I didn’t mean to kill him! He slipped, we fell, his neck broke. It wasn’t a mistake, it was an act of God.’

‘Don’t speak ill of the living,’ he jokes, but she clearly isn’t in the mood. ‘Anyway, I’m holding [him up] now, and I’m at a complete loss. You know, as to what to do with his body.’

‘If you’ve got your arms around him you might as well just stay there in the gangway and make it look like you’re kissing.’ She sounds a bit desperate.

Desperate times call for desperate measures, as our motley crew will discover in the course of this novel’s events. By turns vicious, philosophical and wickedly funny, this whip-smart thriller made me chortle and gasp and, at one point, cheer out loud. I’m genuinely excited to see how they’ll adapt this already cinematic narrative into a movie, and am quietly confident they’ll make a success of it. Hard not to, with a basis as solid and riveting as this!