Book Review: Bryant & May: Hall of Mirrors by Christopher Fowler 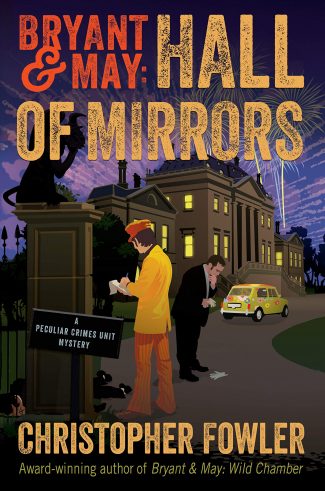 Bryant & May: Hall of Mirrors

Bryant & May: Hall of Mirrors by Christopher Fowler is the 15th book in the Peculiar Crimes Unit series, set in London, 1969, where Detectives Arthur Bryant and John May find themselves caught in the middle of a good, old-fashioned manor house murder mystery.

Veteran readers know when they’re reading the work of a pro. I’ve long been a fan of Christopher Fowler’s work. He’s one of the most versatile writers around, and I’m particularly fond of his horror novels. However, I often lament having read many of the Bryant and May books with significant swaths of time in between. So, as a result, I forget how intricate Fowler plots these things—and how darn funny they are. This prequel is no exception, and it’s a perfect starting point for anyone that hasn’t yet discovered this fantastic series, which is 15 books in and keeps getting better and better.

Arthur Bryant and John May are the sole detectives of London’s Peculiar Crimes Unit, and well, their purview is crime with a “peculiar” element. This outing, which takes place in 1969, is without most of the strangeness that usually makes up the bulk of their cases, but it’s no less entertaining. New readers will spot Fowler’s gift for painting detailed character portraits immediately in a description of Arthur Bryant as a young man.

It’s hard to imagine London’s oldest detective as a young man, isn’t it? An unlined face, an unclouded eye, and unjaundiced viewpoint, a thirty-two-inch waist, just one chin. His good points then were pretty much unchanged: naivety, an ill-concealed sense of amusement, a willingness to believe in almost anything that fought the tide of popular opinion. His bad points were in evidence, too: a determined refusal to take life seriously, a disregard for rules, a taste for the incendiary, a tendency towards anarchy. Not the off-the-peg anarchy of the times, though: an altogether more personal and peculiar form of rebellion. He was immune to the tidal pull of popular opinion.

John May, on the other hand, is a man comfortable and completely in tune with the Swinging London vibe. He always has a lady on his arm, wears flared trousers with glee, and is constantly bemused at Bryant’s refusal to get with the times. They make an odd couple, but that’s what’s so enduring about them.

After a chase involving a man who they’re convinced is a violent criminal and prison escapee, they find themselves at the receiving end of a dressing down by their boss, the wildly incompetent Roger Trapp, who “had a small birthmark on the back of his neck shaped like a question mark, but because he never saw it he was always puzzled by the uncertainty it created as he was leaving meetings.” Unfortunately, the Peculiar Crimes Unit goes through overseers like water through a sieve, attracting these sorts of men.

Anyway, the chase went, shall we say, terribly wrong. It involved an exploding barge. Nobody was hurt, but it’s a terrible public relations disaster, and Trapp is determined to get the duo out of his Brylcreemed hair.

So, Trapp finds what he thinks is the perfect solution: charge the two with the care and feeding of one Monty Hatten-Jones, who is scheduled to testify against a powerful man charged with bribery in a few days’ time. The prosecution wants to make sure he’s alive to do it. Monty wants to go to a party at the crumbling but still moneyed Tavistock Hall in Kent, and Bryant and May have no choice but to go along—in disguise, of course. May is his suave self and has no trouble, but Bryant makes an unusual choice regarding his wardrobe.

‘I don’t have any actual weekend clothes,’ Bryant explained, ‘so I asked the amateur theatre group next door if I could borrow something. They’re running a Noel Coward season at the moment, so I was able to cadge some togs from Cavalcade. There’s a thing called a shooting jacket and a sort of horse-riding hat, along with some plus fours, spats, tails and a top hat from the 1935 London Gang Show. I haven’t actually looked to see what else is in there. I suppose you already own the right gear, what with your habit of going out.’

There’s a bit of foreshadowing there, which results in some laughs later involving his strange wardrobe (think rotating bow ties and clown trousers). And, of course, this being Bryant and May, nothing is ever simple, and it turns out that Tavistock Hall is effectively cut off from the outside world because of a snafu involving military exercises. Those familiar with this series will find the idea of Bryant and May within shouting distance of tanks and grenades somewhat alarming, which is part of the fun.

Tavistock Hall is being sold by Lady Beatrice Banks-Marion to millionaire Donald Burke, who plans on making the pile into a Business School. It’s still rather stately, even if Lady Beatrice’s strange son Harry has erected a hippie ashram in the backyard and rambles around the estate with his little pig, Malacrida. The supporting cast of characters are like something right out of Clue—but so much better. Among them are a mystery author, a flamboyant interior designer, Donald Burke’s mousy wife Norma, an oddly shifty vicar, and a woman rumored to be Donald’s mistress. And, of course, hippies. Lots of hippies.

The whole weekend is designed as one last, fancy hurrah before Lady Beatrice signs the home over to Donald Burke, and things go wildly wrong. More than one horrific death is on the horizon, and Bryant and May must make sense of things—and catch a killer—with little help from the outside world. Don’t worry, they’re up to the task.

For all the fun elements and considerable humor (I laughed out loud a lot), Fowler has quite a bit to say about the plight of women in general in 1969, even in a society on the cusp of so much change. To say more would ruin things, but it’s a theme he works very nicely into the story. There’s a lot going on in this one, but as I said, Fowler is a consummate pro whose plotting is as tight as it gets. If you’re an Agatha Christie fan, you’ll find a lot to love. Even if you aren’t, I can’t think of a better way to spend a reading weekend, preferably with a fire going and a storm raging outside.