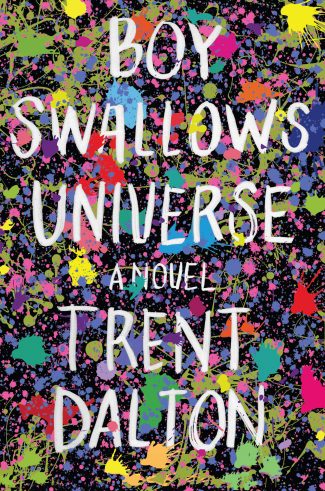 Boy Swallows Universe is unlike any coming-of-age story I’ve ever read. Trent Dalton’s debut novel is a tale of “love, crime, magic, fate”—words that barely scratch the surface of the depth and breadth of Eli Bell’s journey.

Brisbane, 1983: A lost father, a mute brother, a mum in jail, a heroin dealer for a stepfather and a notorious crim for a babysitter. It’s not as if Eli’s life isn’t complicated enough already. He’s just trying to follow his heart, learning what it takes to be a good man, but life just keeps throwing obstacles in the way—not least of which is Tytus Broz, legendary Brisbane drug dealer.

How to describe Eli and his life in 1983? His best friend, vision-guide, seer, and babysitter is Slim. Slim is famous in Australia for the staggering number of times he’s escaped from prison, but to Eli, he’s a steadfast anchor who explains the mysteries of the universe, always in the terse language of aphorisms. Eli’s other immoveable ally is his older brother, August. August doesn’t speak, but he has communication skills par excellence. He’s a genius who “speaks” with his hands and his eyes.

Eli’s universe is riddled with criminals and criminal activities. His mother, Lena, and her boyfriend, Lyle, are drug addicts. Who knows why his father disappeared? Eli lives in a “seedy Brisbane suburb,” not exactly a salubrious neighborhood. But the bald facts of Eli’s family and environment are peripheral to the reality of Eli’s inner life. He is loyal to a fault, always seeing beyond the obvious.

His heightened perceptiveness is a testament to Slim’s teaching. Be you a copper or a criminal, observing your mark without them spotting you is a necessity. One night, the sky of their suburb lights up:

In the night sky, about a block away, a purple firework whizzes into the darkness above the suburban houses, rising and fizzing with a corkscrew velocity before reaching its peak elevation and exploding into ten or so smaller firework strands that umbrella-pop into a briefly luminous and vivid purple sky fountain.

Truly, Trent Dalton paints scenes with words that explode off the page. In the lit-up sky, August and Eli spot Lyle striding away from the house. Eli is curious as to where’s Lyle off to, but the enigmatic August “slashes” his pointer finger into the air, “scribbling the invisible lines of two words. Already know.”

I’ve been following people for years. The key elements to a successful follow are distance and belief. Distance enough from the subject to remain undetected. Belief enough to convince yourself you’re not actually following the subject, even though you are. Belief means invisibility. Just another invisible stranger in a world of invisible strangers.

Eli wants to be a journalist. An unlikely goal, given his erratic life. But his imagination is unparalleled, and Slim has taught him how to escape reality by being hyper-aware of details—what better training for a would-be journalist?

Woven through Boy Swallows Universe are Eli’s observations of his mother and stepdad’s struggles with addiction. Getting hooked, getting clean, slipping into drug use again, rinse, and repeat—except for the gritty, tangible, heartbreaking details. After a seven-day lockdown, Lyle opens the door to Lena’s bedroom and admits her sons.

There were scattered paper plates and food scraps across the room amid clumps of hair. There was a bedpan in the corner of the room. The room’s sky-blue walls were covered in small holes the size of Mum’s fists and emanating from these holes were streaks of blood that looked like tattered red flags blowing in battlefield winds. A long brown streak of dried-up shit wound like a dirt road to nowhere along two walls. And whatever the battle was that Mum had been waging in that small bedroom, we knew she had just won it.

Slim shares phenomenally detailed stories of life at the notorious Boggo Road with Eli. His most precious gift is teaching Eli how to disassociate from now—or here—into the there. There is that “boundless and unlocked universe expanding in his head and heart.” It’s so much more than just using one’s imagination.

Slim touches a scar, sips from a cup of sour milk, and he’s off. “A shoulder sunspot was a wormhole to the beaches of the Sunshine Coast. One rub and he was gone.” Slim’s open sesame to freedom is his “adult mind,” and he tells Eli that he also has an adult mind, only in a child’s body.

Slim says half of his Boggo Road prison mates would have died after a week in Black Peter because half of any prison population, and any major city of the world for the matter, is filled with adult men with child minds. But an adult mind can take an adult man anywhere he wants to go.

That stark statement is the key to Eli Bell’s tortuous and twisting road to early adulthood. Eli is not naïve or gullible, but somehow, knowledge of human frailty and venality brings out compassion rather than scorn from him. His life is proof positive that Slim’s statement about adult minds is true, at least for Eli.