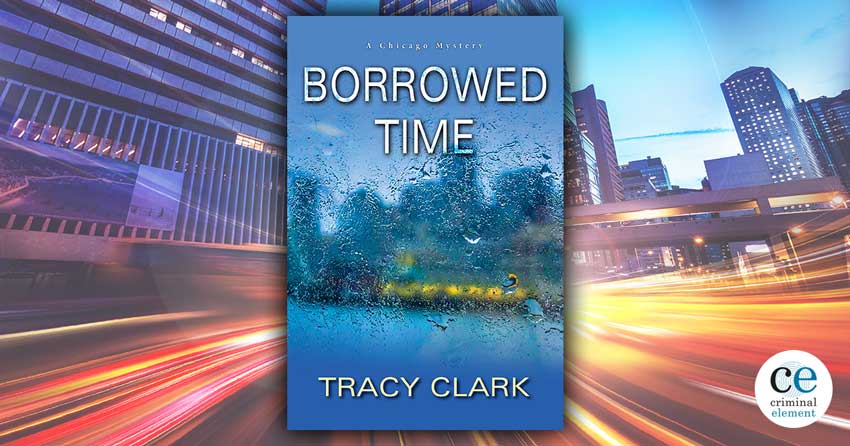 Borrowed Time by Tracy Clark is second mystery featuring Cassandra Raines, the former Chicago cop turned private investigator, who looks into a suspicious death as a favor to a friend—and makes some powerful enemies.

Cassandra Raines is a former cop turned private investigator, her personal life is “complicated,” and she is blessed with having a lot of folks in her corner. Cass readily admits her working life can be dull, with days and nights peppered with persistence and guile, especially when dealing with lowlifes.

A PI’s life isn’t glamorous, not by a long shot. I spend half my time sitting in a cold car, watching people do the dumbest things, and the other half typing up reports about it. But that’s when business isn’t slow. When it is, like now, I, Cass Raines, PI, contract myself out for steady pay.

The symbiotic relationship between law firms and private investigators predates the win/win arrangement television PI Paul Drake had with attorney Perry Mason. Cass’s pay-the-bills assignment from a law firm is to serve a summons on Big Percy, a non-wife-supporting blues player. Operating under the rubric of keep it simple, stupid, Cass pretends to ask for an autograph.

Big Percy leered at me. “Now, where’d you get that sexy smile from?”

I grinned foolishly. Really, I should take to the stage. I was a natural. “It came with the ears.”

Prescott’s eyes clouded over, confusion wrinkling his piggish face. He was back quickly, though. “Everybody knows I got a soft spot for the ladies.” He took a long survey of me. It started high, lingered a bit in the middle, and stopped at my shoe tops. “And I like’em lean, leggy, and caramel colored, just like you.”

You think this flirtatious behavior from Mr. Piggy is going to end well for him? Nope. His assistant even supplies the pen that seals his doom.

Tracy Clark is good at showcasing the reality of a private investigator’s life—weaving the props and places (seedy diner, the cop shop, the Windy City in all its diversity)—seamlessly into the plot. Derek’s Diner is Cass’s go-to spot. She likes it because it’s never crowded.

People flocked to other diners, but they didn’t flock here and wouldn’t, even if Deek were giving away free bacon. That’s because Willis Deacon, Vietnam vet turned surly fry cook and unrepentant social pariah, would go down in the annals of history as the grumpiest black man this side of Hades.

Cass takes it all in stride. Since fictional PI’s often operate at the corner of legal and questionable, Cass’s friends run the gamut of cops to criminals. She’s brave, sometimes stupidly so, in the face of attackers and/or opposition, and she’ll tap anyone who can help in her quest for the truth. If Cass takes on your case, she’ll stick with it no matter how many noses she puts out of joint. It’s not a particularly well-hidden secret that she has marshmallow innards when it comes to wielding the sword of justice and standing up for what’s right.

But sometimes the most familiar paths can lead straight to danger—like at Cass’s go-to diner, where new delivery guy Jung Byson wants to enlist her expertise. Jung’s friend, Tim Ayers, scion of a wealthy Chicago family, has been found dead, floating in Lake Michigan near his luxury boat. And Jung is convinced there’s a murderer on the loose…

Cass reluctantly begins digging only to discover that Jung neglected to mention one crucial fact: Tim Ayers was terminally ill.

Cass can’t initially figure out why someone would want to murder a person who wasn’t long for this world. So she taps her former colleague Detective Marta Pena for some behind-the-scenes background. Marta says nothing hinky was revealed in Tim Ayers’s investigation, but Cass keeps pressing.

“Marta, please, give me some credit. I told him straight out that if you were on the case, then you ran it like it should be run. But if Mr. Dippy … ugh … Jung can get a grip on what happened, he can start to put this whole thing behind him. Five minutes. Just the highlights, and I’m a ghost.”

“Until next time you want a favor,” Marta groused.

“Just remember, that door swings both ways,” I said.

Another staple in a private investigator series is a love interest who is intriguing but doesn’t distract from the main story. Meet Detective Eli Weber, a tall, cool, recently-divorced glass of water. Cass turns him down when he asks for a date, but Weber doesn’t seem deterred.

He backed up, headed for the car as smooth as anything, irritatingly unruffled, like he owned the street and every brick in it. “I’ll call. We’ll set something up for when you’re not so busy.”

He opened the driver’s door, held it. “You’re still standing there. That’s my ‘yes.’”

We haven’t seen the last of Eli.

A comparison that kept occurring to me was how much Weber’s series reminded me of Robert Parker’s famous Spenser books. The city of Chicago is a character in Cass’s story—she lives in Hyde Park, “a neighborhood and community area on the South Side of Chicago.” But more than that is Cass’s attitude. Her investigations lead her to a cross-dressers bar named Sophie’s, a joint that “hadn’t had a door open or fresh air circulating since the Capone era.” The bartender tells her that the patrons are staring at her and that’s she’s underdressed.

I looked down at myself, taking the survey. I looked fine to me, dressed in my usual knockabout PI uniform: jeans, shirt, Nikes, disarming smile. “But still as cute as a bug’s ear.”

I shook my head. “Not heat, and even if I were, I don’t see anything illegal going on here.”

Shades of Spenser. No doubt there are countless stories waiting to be told about crime and punishment in Chicago—and Tracy Clark’s PI Cassandra Raine is just the woman to bring them to life.